"We'll be here for a while." My sister pointed out the obvious. Road crews were repaving the surface on the Confederation bridge and it was down to one-lane traffic.

"The shoulders are so narrow. It wouldn't even fit an ambulance or a fire engine." I said as I wondered how emergency vehicles could respond if there was an accident.

"I wonder why they built the bridge so narrow? There is no way to expand it."

"That's what we get with short sighted politicians."

We were stuck behind a long line of cars in a 30 minute long delay. I was starting to lose patience as I was trying to arrive in Alma for an incoming tide. The Bay of Fundy area is known for extreme tides. Many bays and inlets in the area can be left high and dry during low tide. If I miss the incoming, I would only have one more chance the next day to catch an Atlantic Tomcod on this trip.

Finally, traffic was stopped on the other side and our lane started to move slowly. After clearing the bridge on the New Brunswick side, we noticed what I thought was a convenient visitor information area. It was actually the visitor Center at Cape Jourimain National Wildlife Area. The visitor center was a shining example of sustainable design, including solar power, rainwater plumbing and innovative compost system for organic and sewage waste. A short trail lead to a viewing platform where visitors can watch migratory birds refuge in the protected marshland and also admire the Confederation Bridge. 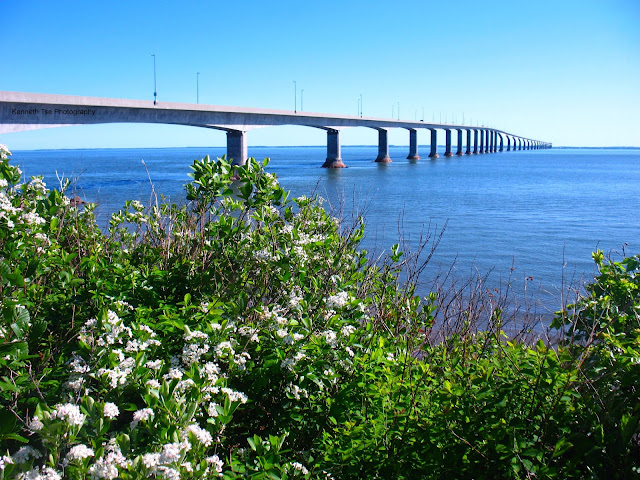 Originally, I had planned to make a short stop at Hopewell to visit a friend. However, following the GPS navigation, it led us toward Salisbury on Highway 2 on our way to Alma. We had completely missed Hopewell and didn't realize the mistake until we had gone way too far.

Our alternative route did offer us a drive through Fundy National Park, an opportunity that we otherwise could not afford on our tight schedule.

We arrived in Alma just as the tide was about to peak. Wasting no time, I set up a carolina rig with a whole worm on the 9' surf rod so I could try for a skate, while I tied on a dropper loop rig on my shorter 7' rod to fish in hand.

My friend Eli mentioned that Atlantic Tomcod were caught on a mud flat during the incoming tide. As the tide was high and slacking, I started to worry the fish had pushed up the river as the tide enabled them greater access upstream; I hadn't receive a bite for more than 15 minutes.

Suddenly, there was a sharp twang from the surf rod. Running over to the bending rod, there were definitive head shakes twitching the rod tip. Unfortunately, the first fish at this location was a Winter Flounder. These flatfishes appeared to be very common in Atlantic Canada's inshore habitat.

Casting out the surf rod again, it took just a minute before the bait was taken again. This time, the bite seemed more tentative. The fish tug at the line a few times before committing fully. Whatever was on the line was not fighting with the determined bulldog dives of a Sculpin or the thumping headshakes of a Flounder. It fought very little, in fact. I was glad to see the long and golden body of an Atlantic Tomcod though! 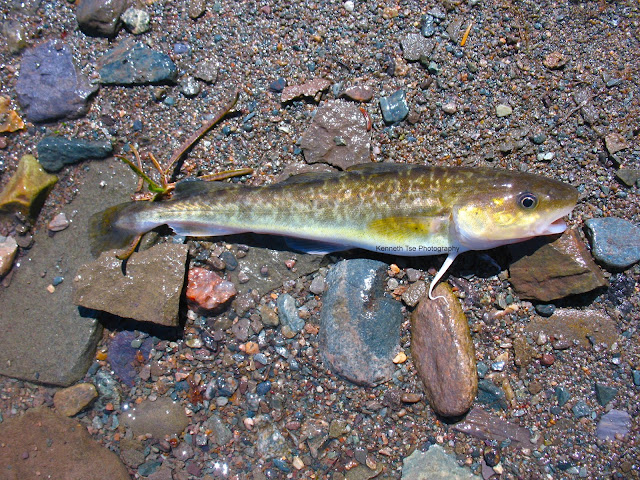 This smaller relative of Cod, Haddock and Pollock is equally tasty, but their diminutive size don't offer much for the table unless they are over 10 inches.

I caught 3 more Atlantic Tomcod as the tide switched to outgoing. The current stirred up feeding activity and bites were much more frequent. Once the current was strong enough that my 1oz pyramid sinker could no longer hold bottom, I decide to pack up. We had more locations to visit in the afternoon.

Before we left Alma, I took a couple pictures of the area when the tide was at mid outgoing. 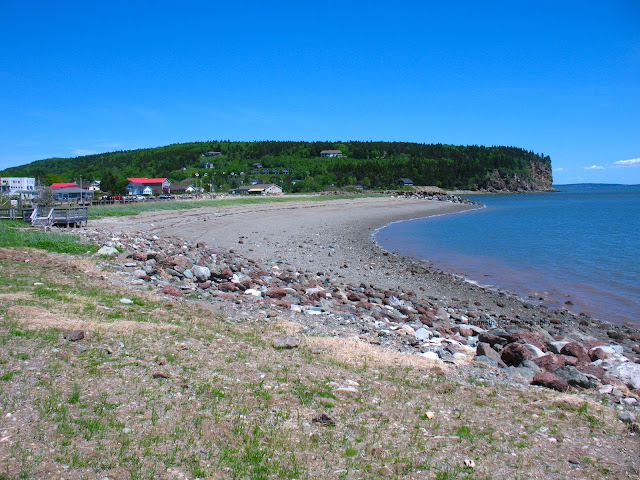 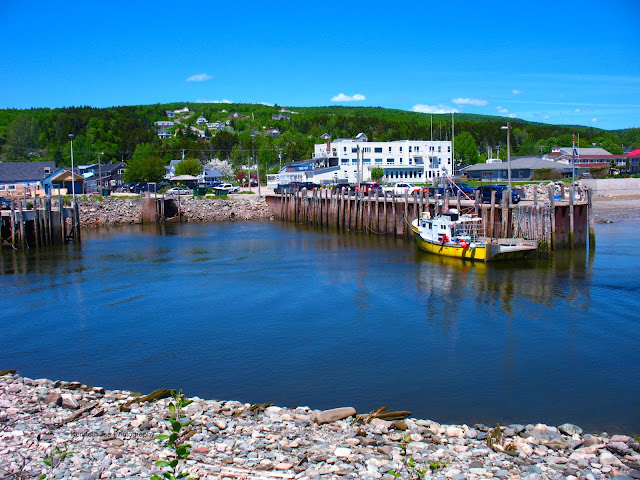 Our first stop was Waterside Beach which is a UNESCO Biosphere site. The coastal wetland and muddy flat are important resting and feeding location for migratory birds. During our visit in June, there were very few birds in the area, but spring and fall would be the best time to visit for birders. 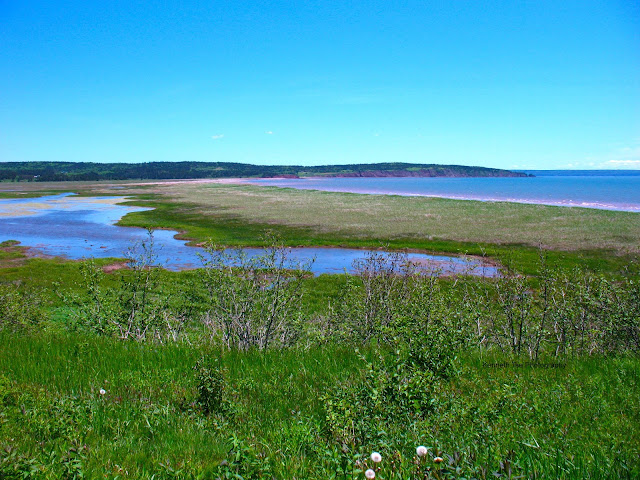 Further down the road, we reached Cape Enrage. As the tide continued to drop, more and more seabed was exposed in the Bay of Fundy. Cape Enrage gave us a great panoramic view of the bay. 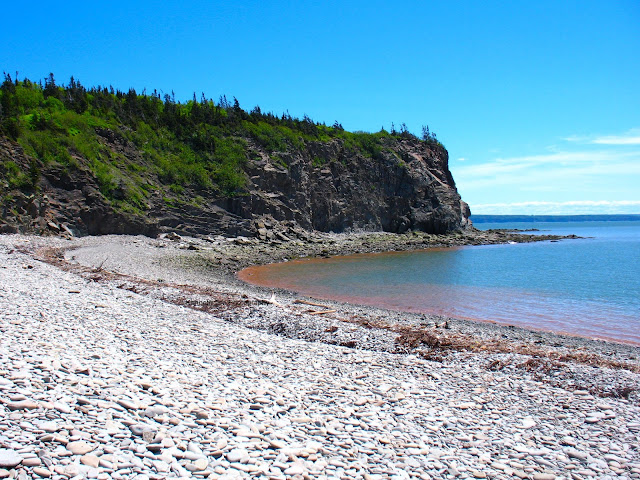 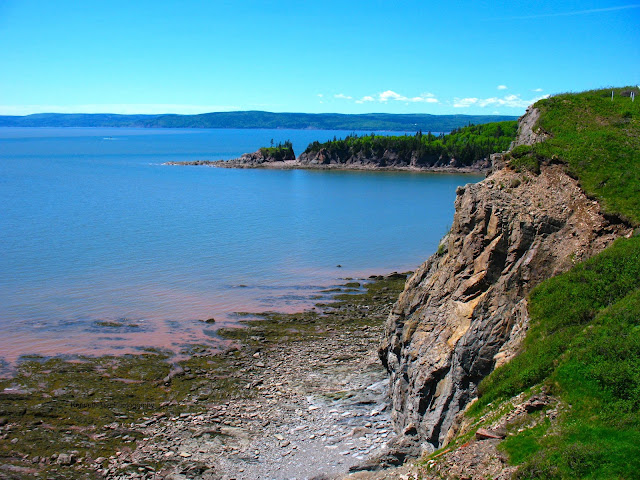 I had rearranged to meet with my friend Casey in Hopewell at 3pm, but when I arrived, Casey was not home. Casey later let me know that he had to take his wife to the hospital. I guess it just wasn't to be this time.

Our final highlight of the day was The Rocks Provincial Park. The provincial park protects and give access to sea stacks and the exposed seabed. Many people (including myself initially) thought that the sea stacks were part of Fundy National Park. The admission gives two-day access to the park so you can visit both the low tide and the high tide on consecutive days. I found out that if you have already purchase your admission, it is possible to enter the park before opening hours and leave the park past closing hours at your own risk. However, this is best done during outgoing or low tide as the risk of getting trapped and drowned is very real.

There was no such drama for my sister and I this afternoon. The park was full of people and park staff. We were waiting for the peak low tide at 5:30pm, and for people to leave at 5pm when the park closes, so we had some time to burn. We spent an hour at the Interpretive Center to learn about the area and the geological processes that gave rise to the cliffs and sea stacks, and the biology of the seabed and coastal marshes.

"Are you hungry?" My sister asked as we started to walk along the shady gravel trail toward Flower Pot Rocks. We had completely forgotten about lunch so we were wolfing down granola and fruits. Many people were walking in the opposite direction toward the parking lot while we pushed deeper.

A few people, who like us, appreciate to enjoy nature and her majesty without the crowds. There were few who were scattered around the area. With the right timing, we took a few photos that illustrate what Hopewell Rocks looks like before it became so popular. 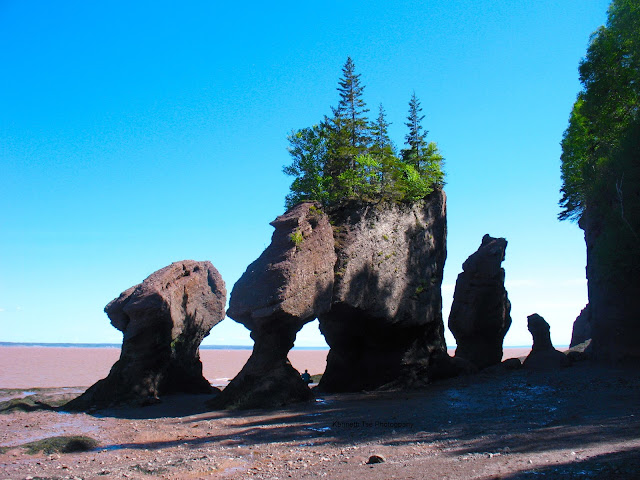 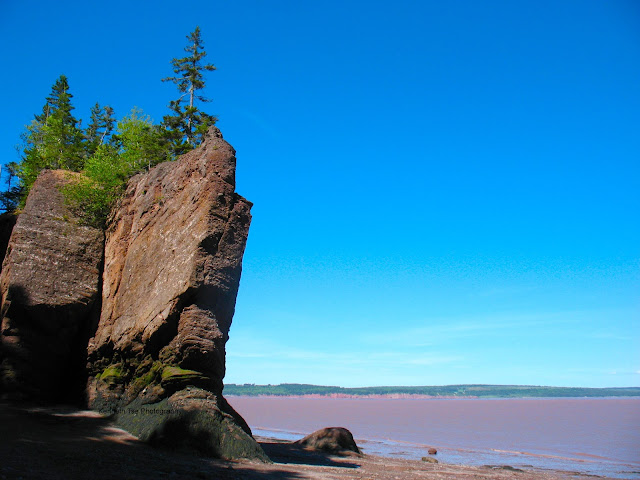 The seafloor was quite interesting. Closer to the rocks, the ground was hard conglomerate. The further we walk away from the cliffs and rocks, the more silty and muddy it became. My sister had no intention in getting her feet stuck in mud, so we mainly stuck closer to the cliffs. If we had more time, we would have venture further along the cliffs.

"I guess we can visit here very early tomorrow." I said "We could maybe get a few picture of these rocks as dawn breaks." Low tide was schedule for 6:30am the next morning. We would have about 1.5 hours to explore the park on our own before it opens at 8am when most people visits.

We worked our way back toward the Interpretive Center, we stopped at each lookout area. With the sun behind us, the lighting wasn't always great for photography since long shadows were cast toward the sea stacks and cliffs. We were hoping that shooting condition would improve the next day. The sun lit up Diamond Rock just perfectly though. 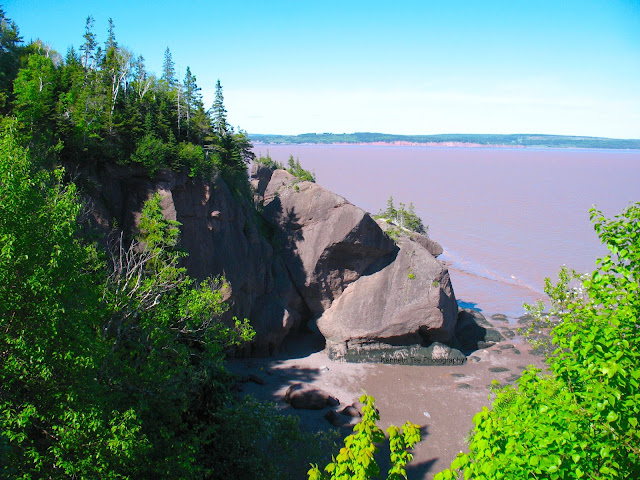 Without a doubt, my favourite location was Daniels Flats. As the tide receded each day, water from tidal creeks would drain off Daniels Flats. Over the years, deep drainage channels were eroded into the flats and mini canyons carve into existence. From this location, the magnitude of the Bay of Fundy tide was also illustrated as immense mud flats were exposed while the water's edge was 1000 feet away in some places. It was an astounding sight.

My sister and I were craving for food, so we drove back to Alma to hunt down a couple of lobsters for dinner. Unfortunately, all the fish markets closed at 6pm. We had to settle for a lobster roll that was tasty, but small and overpriced in my mind. 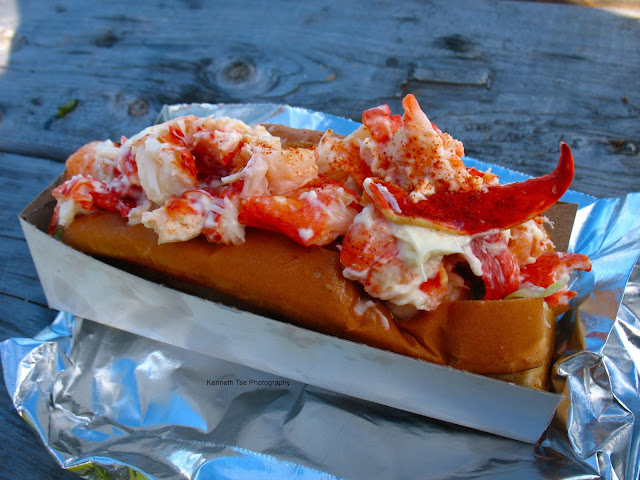 Before we return to Fundy National Park to set up camp, we took a few more pictures of Alma during low tide. 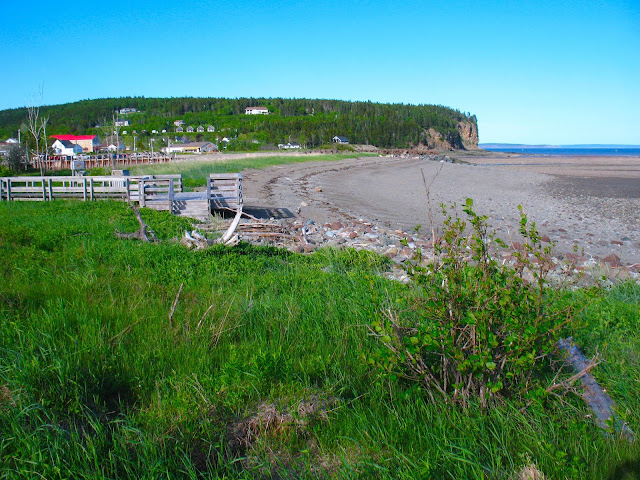 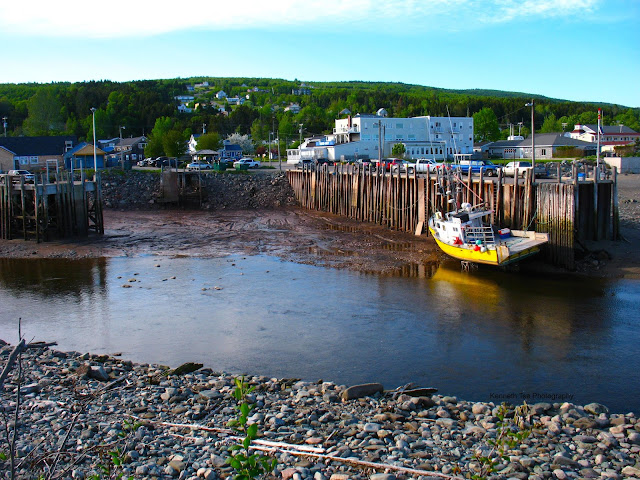 Fundy National Park's campsites were not very impressive. There were no campsites equipped with a fire pit. Most of the sites sat on very hard bedrock with a thin layer of soil or crushed gravel. It was extremely difficult pinning down the tent as our pegs would not penetrate deep enough.

The only good thing that came out of our night at Fundy was the campfire we shared with our neighbours at a designated communal fire pit. The group were running out of firewood when we bought our leftover bundle of tinder and logs to everyone's delight. To sweeten our arrival, we also brought out ingredients to make some Eli's S'mores, a genius creation by my friend Eli using chocolate chip cookies and marshmallows.

The skies were dark enough that I could see the Milky Way. Throughout the trip, I was hoping to see the northern lights, but we had no such luck. We fell asleep under a clear sky and hope the great weather would continue into the morning.