“Let’s cook in the cooking shelter.”

It had been raining since we went to bed, and the forecast predicted heavy showers until noon. We quickly ran into the car with our sleeping bags and backpacks, and drove the short 200 metres to the coking shelter. I didn’t want to get the rain gear wet just yet…we still have to break camp after breakfast.

Although it wasn’t very cold, the hot breakfast was greatly appreciated before I waded in puddles donning rain gear and sandals to fold the tent. We had a good system going – my sister rolled up ropes and bagged the wet tarp inside the car while I took down the tent. It was all done in less than 20 minutes, and I was relatively dry despite the pouring rain outside.

We started our drive toward Pictou at 10am. The road south from Cheticamp was flat and fairly straight for a while, until we crossed the famous salmon river, the Margaree, and steeply climbed up the river canyon. The scenery would have been great on a dry day, but the steady rain painted a grey wash to everything in the distant.

“Whycocomagh? Why? Whycocomagh?” we joked. We were giggling like children over the silly name. In the mist, we could barely make out the shoreline of Bras d’Or Lake. Although this waterbody is called a lake, the salinity is high enough to support saltwater species such as Atlantic Cod and Atlantic Mackerel. The expanse of water offers quite a few areas to fish, but there were only a few new species that would interest me. We didn’t have time to stop anyways.

Once we crossed the bridge at Port Hawkesbury, the landscape became much less interesting on the main land of Nova Scotia as the rolling hills resembled northern Ontario. However, the driving conditions improved gradually from misty rain to cloudy skies and finally the sun poke through the scattered clouds. We arrived in New Glasgow by 1:30pm and had some time to replenish our groceries, plus an added pound of fresh PEI cultivated mussels for under $2.

Just 25 minutes away, from New Glasgow, we arrived at Pictou ferry terminal at 2:43pm. The ferry we had originally planned to take was scheduled to leave at 4:00pm, giving us at least an hour wait. Luckily, a 2:45pm ferry was added to the summer schedule and we made it by the skin of our teeth. This would give us extra time in Prince Edward Island.

We had just enough time to prepare and enjoyed a quick lunch before an announcement to debark was heard. The journey over the Northumberland Strait only took an hour. As we pulled into Woods Island, we could see the distinct red and white lighthouse standing as a sentinel. As took a few pictures from Woods Island Provincial Park that sat immediately next to the ferry terminal. 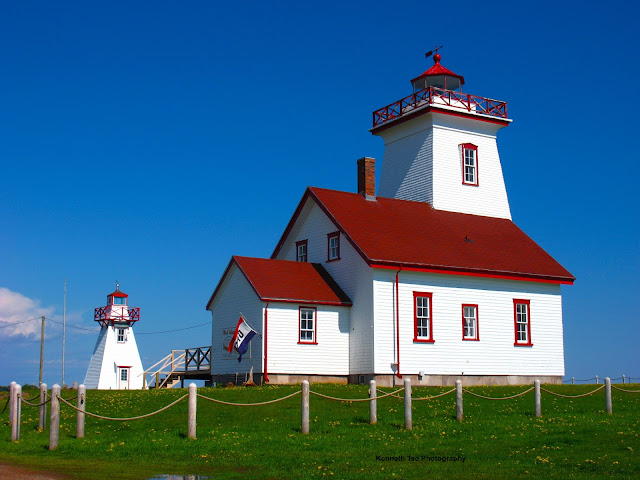 The landscape of Prince Edward Island had been influenced by several glaciers during the ice age. The soft red sandstone bedrock easy erode away, giving the island its characteristic gentle rolling hills and low red sea cliffs. The interior of the island is quite beautiful in June as freshly plowed exposes the red soil that sat complementary to the fresh lime green of recently sown crops. Unforuntately, I was driving most of the time and my sister took all the farmland pictures with her camera.

After checking into our campground at New Glasgow (in PEI), we headed north to North Rustico. Fisherman unloads their catch in the fishing village and mussel farms occupied every little bay in the area. My friend Eli suggested that I should try the wharf as he caught Shorthorn Sculpin and Winter Flounder inside the harbour. In the meantime, my sister enjoyed a stroll along a paved trail that lead to the beach and beyond.

I started fishing with a 1/16oz jighead and a 2” green/chartreuse grub to vertical jig along the wharf. This was Eli’s most productive method. Almost immediately, I was getting small bites as soon as the jig fell through the water column. Looking over the side, I soon realized that these were the all too common Cunner, until I saw a flatfish following the jig to the surface on one occasion. On the next drop, the flatfish struck at the tail of the jig but its mouth was to small to inhale the entire hook.

I cut off the jig to tie on a #14 hook and added a split shot to the line. Using just a small chunk of worm enough to cover the hook. Cunner quickly swarmed the bait. The bite was easy to recognize as a series of quick taps were followed by a sudden run toward the base of the wharf. A few Cunners later, I felt a subtle single tap on the line and the bait simply sat in place. I lifted the line carefully to check for weight and felt something on the other end. As soon as I set the hook, strong headshakes vibrated up the line and I knew I had my Winter Flounder at last! 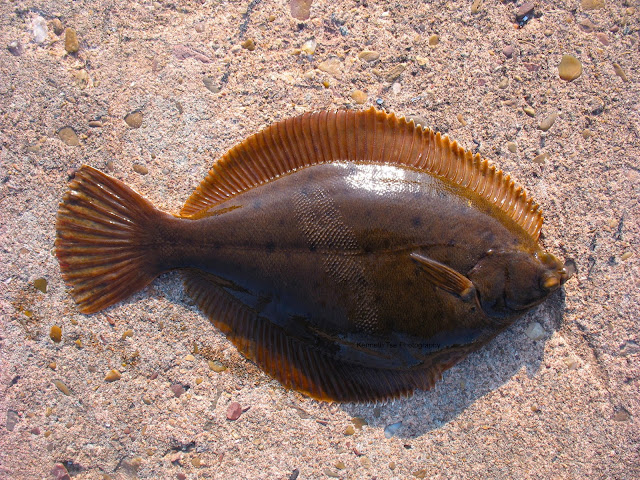 I have now caught a new species from Prince Edward Island. Another province checked off!

Winter Flounder can be quite variable in colour. Here's a second smaller one that was more mottled in pattern. 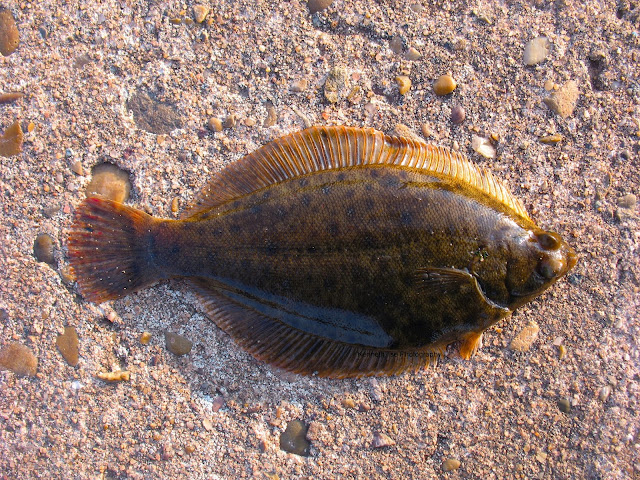 I decided to tie on a 1/4oz jighead with the 2" grub to search for Shorthorn Sculpin. I tried to work directly under the wharf, along side the wharf pilings, out further away from the dock side and finally searched the middle of the harbour. Strangely, the scuplins were nowhere to be found. Occasionally, a large enough Cunner would take the lure though. 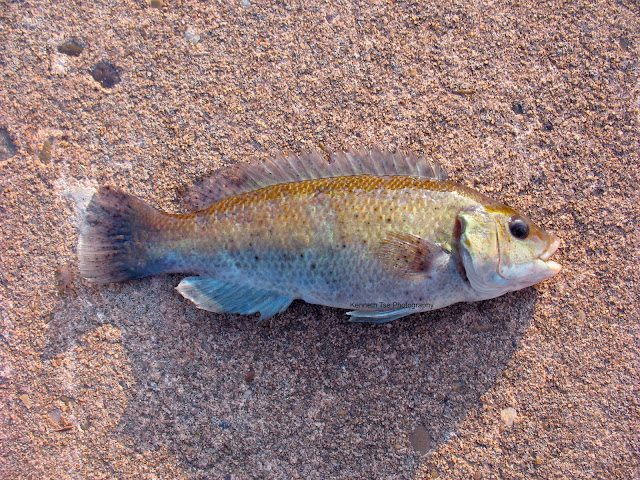 About 10 minutes before my 2 hour fishing session ends (as my sister returned from her walk around the area), I noticed a few schools of micros feeding on the surface as the tidal current increases. These appeared to be stickleback, although I'm not exactly sure which species. I asked my sister to give me another 30 minutes to try for them, and returned to the wharf with my tenkara rod.

You would think, with their constant puddling on the surface, that these fish would be easy to catch. However, they were very shy of any commotion including the plop of tiny split shots, and the unnatural movement of line, split shot and hook around their vicinity. I spooked a few of them until I decided to simply hold the baited hook in place and wait for a school to return. The cautious fish would take 30 seconds to 1 minute before they would return (unless a virgin school moved in from other areas) but the fish took little attention to my bait. Seeing that these fish were dimpling the surface, I started to subtly dance the baited hook surface film. This started to draw the attention of a few fish. Finally, one went for the grab and I missed setting the hook. They were so fast! Another few tries after, another fish grabbed it and this time I made no mistake.

Looking at the fish carefully, I can see black blotches along the back and tail section. Together with the lack of tail scutes and bony plates along the side of the body, it identifies this fish as the Blackspotted Stickleback (Gasterosteus wheatlandi). This was a species that was high on my list and Eli didn't find any of them on his trip but I was striving to locate some. Another big check mark on my wish list! 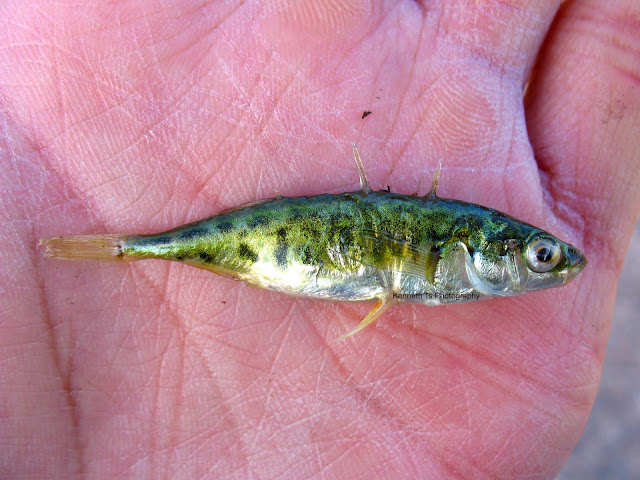 After catching two new species, and with my sister waiting in the car, it was time to return to our campground. Except we didn't have to camp in PEI because New Glasgow Campground offered well outfitted heated cabins at such affordable prices that we opted for a bit of luxury during the middle part of our trip. These cabins were well appointed with a bunk bed for two people, a queen size bed, and a futon that could squeeze two extra people. The owners were extremely accommodating and they allowed us to set up and dry our wet tent and tarps on their unoccupied campsites. We forgot to bring laundry detergent and they provided us with some for our single load. If anyone is planning to visit PEI, please check them out. It is a small family operation and they certain take good care of their property and their guests.

While the laundry was in the wash, my sister and I prepared dinner, including the pound of fresh PEI mussels. Despite the small size, they were the most flavourful mussels I've ever had! Our cranberry and lemon pepper cream sauce was just perfect for it. 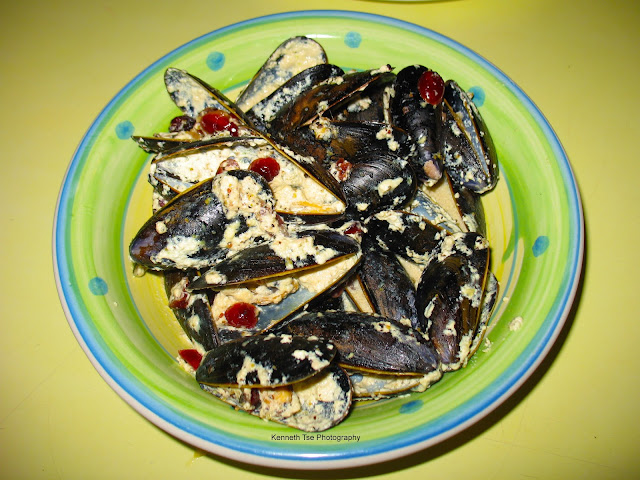 After dinner, we packed away our laundry and took advantage of the free WiFi to catch up emails. We were both pretty tired after a long day on the road and we were in bed before 12pm.

Posted by MuskieBaitAdventures at 8:55 AM