"I'm cold." My sister complained. Indeed, the ferry kept the temperature fairly cool. Added to our seated sleeping position, it wasn't the most comfortable night. But we were only an hour away from the dock.

Disembarking took about an hour, but I had accounted for this in advance on the itinerary. The morning was cool, cloudy and damp. Being right on time, we stopped at Timmies for a hot breakfast to warm up and wake up.

The Cabot Trail is a famous coastal scenic road that skirts Cape Breton. Most of the trail gave access to Cape Breton Highlands National Park. This drive is almost synonymous with the national park. From the eastern end where the trail started at Englishtown, the road was relative flat and straight until Cape Smokey. Aptly named, the cape is often veiled in dense fog.

"It is almost zero visibility!" My sister was worried.

"Did you put your fog lights on?" She inquired.

"No, we don't have fog lights. I don't think they are required in a rental car."

The road twisted up the cape like a boa constrictor gripping its prey. The turns were tight, steep and unpredictable. It wouldn't have been too bad if it was possible to see the road ahead. In the dense fog, visibility was only 20 feet at max.

After we past the highest point in the road, the fog lifted on the smoother descent. The clouds finally gave way to blue skies and we finally had a view of Ingonish from afar.

We stopped at the information center by the Ingonish park gate to confirm our campsite reservation. Knowing that Nova Scotia was famous for its lobsters, my sister ask the park lady where we may get some fresh lobsters.

"You can try the wharf at Ingonish or further north at Neil's Harbour."

"What is the going price for a pound of lobsters?" My sister dug deeper.

"Last time I got them, they were five fifty a pound."

With that information, we decided to find some lobsters later. But first, the Franey Trail was waiting.

Just as quickly as my sister left the car, she came right back inside.

"Where is my bug spray? There are so many mosquitoes outside!"

I looked out at the sunny and bare parking lot at the Franey Trail. It can't be that bad, can it? As soon as I stepped outside, mosquitoes appeared out of nowhere.

An SUV that we saw leaving the parking lot soon returned.

"Yeah, we had to get some bug spray." The daughter said as she covered her mother head to toe in DEET.

The mosquitoes appeared unfazed by the strong sun and heat. I've never seen that before. There were also small annoying biting midges that seemed to prefer our faces. We were completely surprised by the amount of biting insects since there were almost none at Gros Morne.

The Franey Trail cut through Arcadian forest and ascent steeply. It was one of the more challenging day hike at Cape Breton Highlands National Park. I kept encouraging my sister and pushing her forward. Our gravel path soon turned into loose rocks and tree roots. When the steep ascent began, we were greeted with wooden stairs that shot straight up.

"Can we stop for some water?" My sister asked.

An hour into our hike, we stopped for some water, granola and a partial view of the Clyburn Valley. 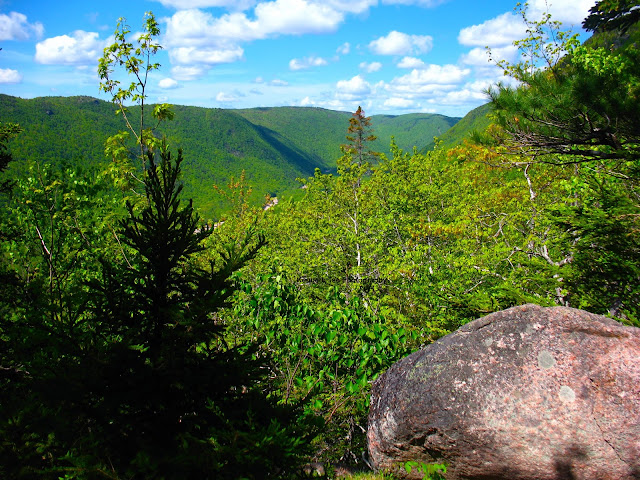 The trail leveled a little as it winded through forest. 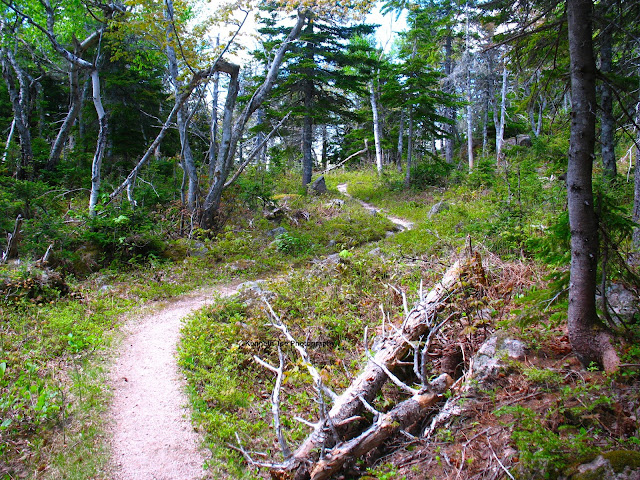 There was even a bog along the trail. 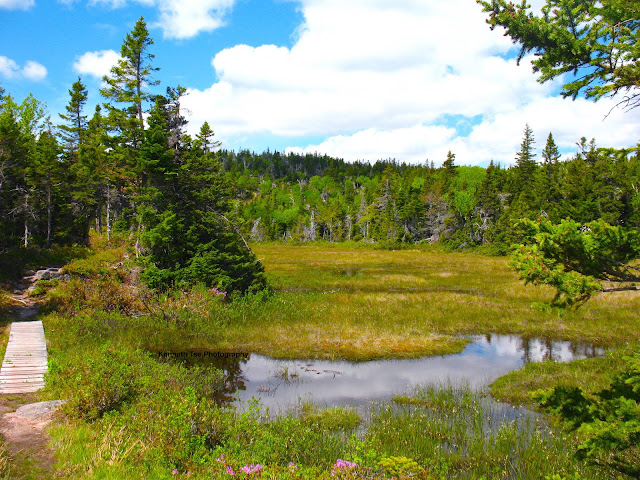 But our climb hadn't finish. In fact, the toughest climb was yet to come. After the 5th set of stairs, my sister needed a rest again. We turned around to marvel over Cape Smokey, which was now completely free of fog. 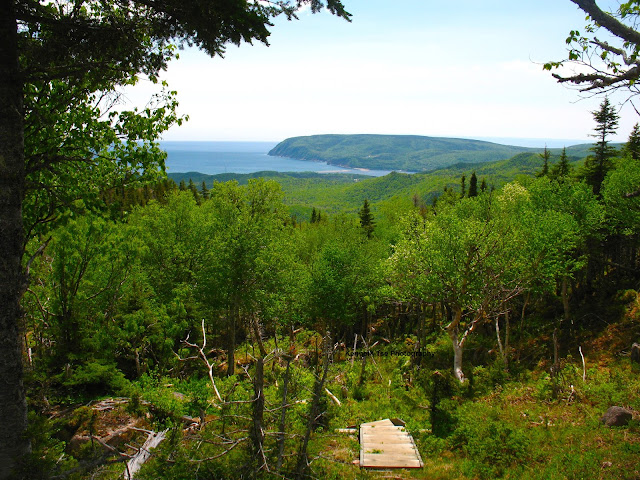 After 2 hours, we finally arrived at the designated lookout on the trail. The view wasn't as advertised on many of the pictures I've seen. Perhaps the pictures were dates and trees had grown to obscure a panoramic view. Perhaps we didn't find the right path that would lead us to a flat platform where we could look off the edge to the Clyburn River valley below. This was the best that we saw. In this photograph, you can see the rocky peninsula known as Middle Head in the center and Cape Smokey to the right. 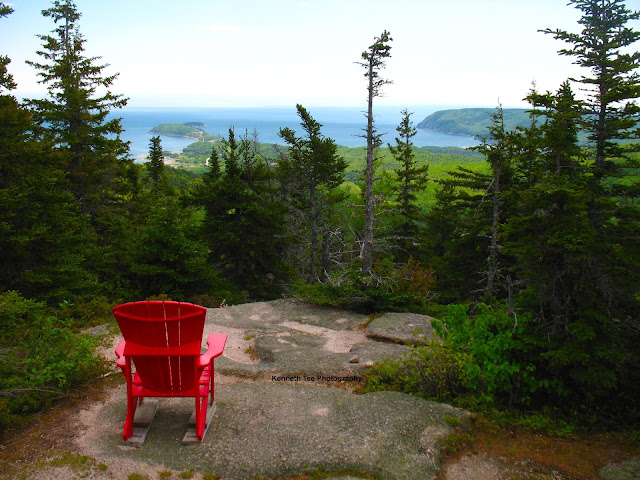 The daughter and mother had arrived earlier and they had been sunning for a while.

"Did you take the harder way up?" The daughter asked.

"There is an easier way up?" My sister was intrigued.

In fact, the descent was much easier, but longer, as it followed a fire road. Wildlife can often be seen here but we only saw some spruce grouse a garter snake and a few frogs. One male spruce grouse appeared to picked his territory on the side of the trail. Despite our close approach, the bird would not leave its tree perch. I only had a fuzzy picture on my camera as it was our first picture of it. We had some National Geographic worthy pictures on my sister camera. 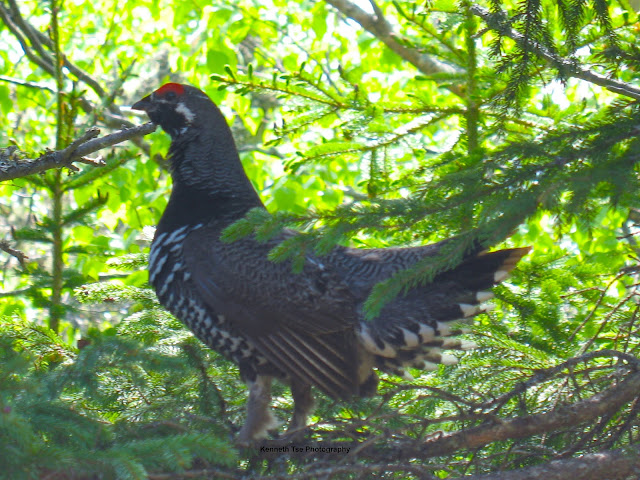 With the fairly level trail, we hike with a fairly quick pace and returned to the car in roughly 2 hours despite covering a greater distance on the hike out.

"What time is high tide?" I asked my sister to check the itinerary.

It was 2:30pm and I had high tide recorded as 4:30pm. There was a lot of time to travel north from Ingonish to Neil's Harbour where I planned to spend a couple hours of fishing. This fishing time also provided my sister a break between hiking.

Along the way toward Neil's Harbour, there were a few lookout points indicated on the park map. We pulled over at each one and took some pictures. 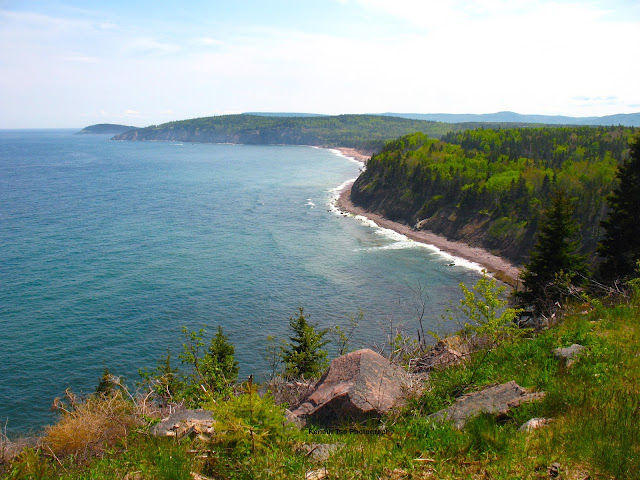 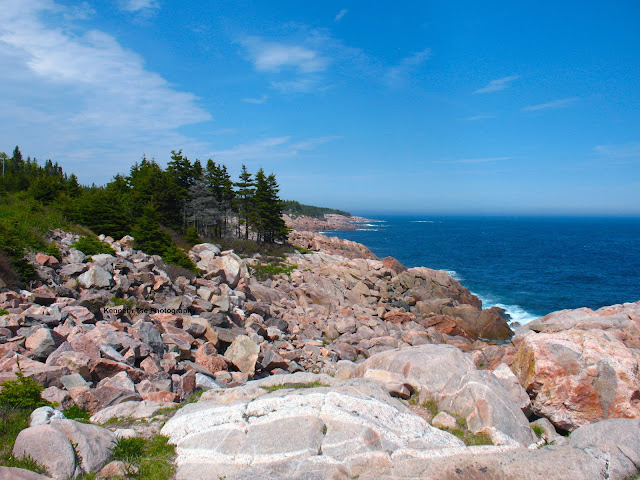 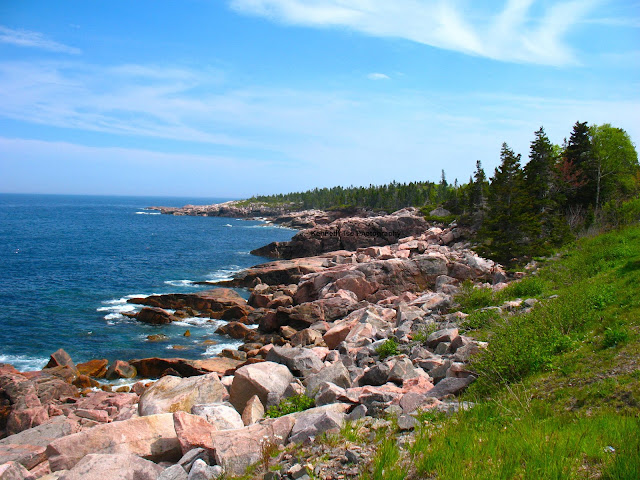 While I walked around the wharf to determine the most promising area to fish, my sister reported that the fisherman had no lobsters for sale. There appeared to be a public boat ramp and I decided to fish the dock next to this ramp. The water was ultra clear, so clear that it looked sterile. I couldn't see any signs of fish, not even Cunner.

After fishing for an hour without any bites, or any signs of fish in general, I decided to cut the fishing short. The water was simply too cold. I had already tried my jighead/grub, a dropper loop rig with nightcrawler, a splitshot rig with nightcrawler that was dragged over sandy bottom, and even dipped around with a tanago hook.

My sister had a nap and she was ready for another hike. We hoped that Broad Cove Mountain Trail would provide a better panoramic view of the area.

The trail only took an hour to reach its terminus. We were mainly focused on climbing up the mountain so there were almost no trail photographs. In fact, the view didn't open up until we reached the top. It was totally worth the legwork though. 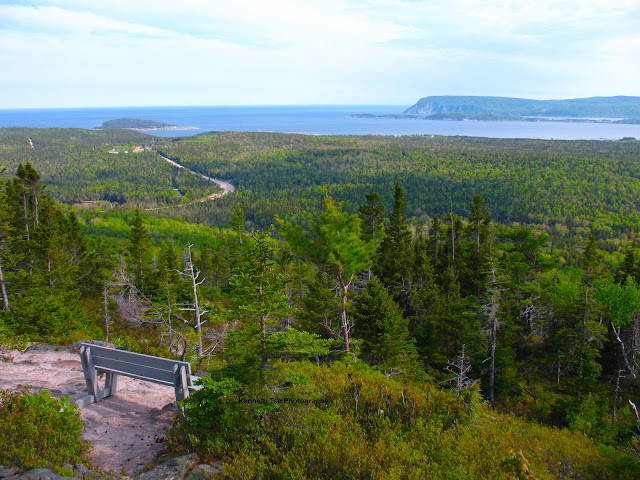 Before we returned to our Broad Cove campsite to settle for the night, we stopped at Ingonish Harbour to search for lobsters. The fisherman preparing their lobster bait at the boat said catches are usually landed between 10am to 12pm. There were two boys who were fishing at the boat trying for mackerel. Apparently, a few had been spotted but the water was still too cold.

"Their eyes are still covered by scales. You'll have to wait a few more weeks until the scales come off their eyes." The fisherman said. "We are catching some mackerel in nets though. They are not too far away."

Unfortunately, it wasn't soon enough for me.

As we were pitching our tent, the sky looked threatening and the wind picked up. We hastily prepared our dinner and finished just in time when the tap opened and rain poured down. We ate quickly in the tent, then packed all the dirty dishes in the truck. I didn't feel like cleaning dishes in pouring rain.