"The view is even better here." My sister said with the camera to her face. Indeed, it was. 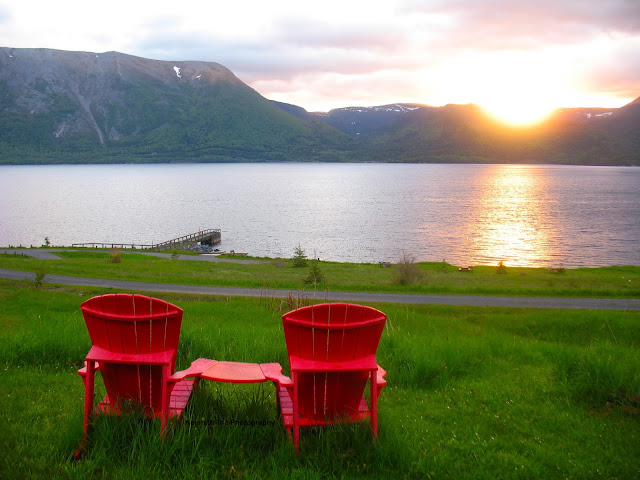 This would be the first, and the last, sunrise we saw at Gros Morne.

At 6am, I had to constantly scan the side of the road for moose. We saw one only a minute from our campsite. The danger is real, and the odd is against our favour. Luckily, we didn't have to swerve or stop for any moose this morning. Only the Tablelands in the growing light was impressive enough to halt our drive toward Green Gardens. 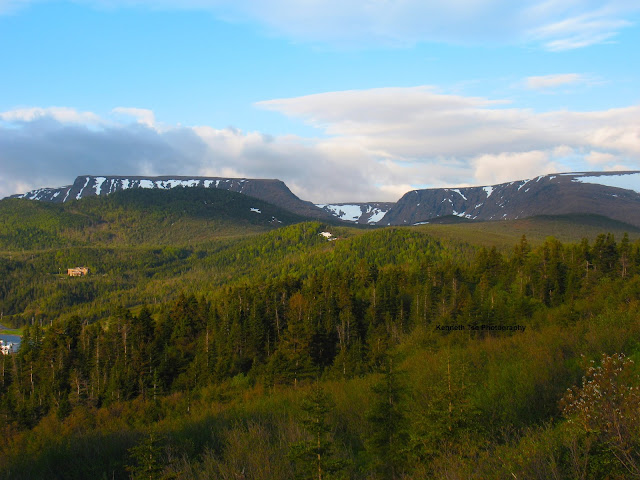 "Watch out. It is really windy!" I said as I tried to hold the car door open.

The wind was rushing down the flat tops of the Tablelands. With gust of over 50km/h, we had to chase down an empty plastic tupperwear before it became a piece of unretrievable trash. The rainy system from the day before was moving quickly out of the area. We should have a clear day until early afternoon. As the wind wrapped around this system, it was whipping up some wicked wind.

My sister packed a breakfast menu of apples and granola for the hike. We decided to skip breakfast to start our Green Garden Trail hike by 7am. We were not intending to avoid the crowd - it was more about fitting in this hike before we had to leave Gros Morne. We had a busy day that required us to break camp, refill groceries and then drive 4 hours to catch our ferry to Nova Scotia. Perhaps, if we were prudent enough, we might just be able to hike Western Brook Pond, if we can get there by 1pm.

Starting from the parking, our hike steadily climbed the gentle valley between the Tablelands and the coastal mountains. The trail was the path of least resistance and water drained from the a whole day's worth of rain. It was good we both had waterproof footwear for this trip. I had envisioned such situation in advance.

The path was well marked and the loose cobble were pretty easy on the feet. About 45 minutes later, we crested the remaining portion of the Tablelands landscape and opened into an alpine meadow. This was a picture taken on our return hike. It was too cloudy and drab early in the morning. 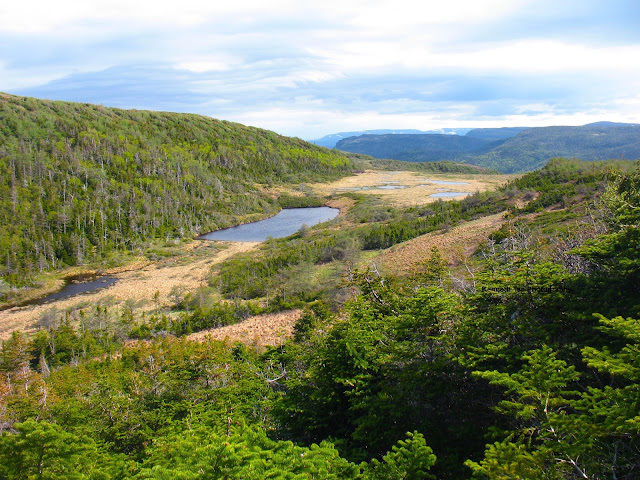 From here on, the path took use progressively toward the coast.

At this point, we can clearly see the remnants of mountains made of basaltic rock. The Tablelands were once part of a larger piece of mantle belonging to the African plate. At the time, Newfoundland was juxtaposed to Africa as part of the supercontinent Pangaea. When North America riffed apart and began its migration north, magma filled the riff and gave rise to these basalt coastal mountains that were uplifted and eroded to its current state. 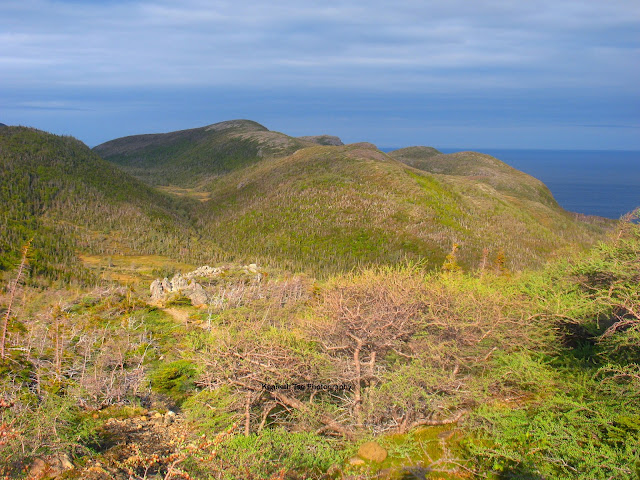 The ascent up the mountain was steep enough that I didn't take too many trail pictures. The descend was even more challenging. There were a lot of stairs to navigate and the wood was slippery after the rain. We had to be extra careful or we would be tumbling down the trail.

There were almost no sign of moose along the earlier part of the trail, but as conifers and ferns grew in this area, we had to avoid moose droppings again. This coastal forest was lush and especially green as plants were welcome spring in Newfoundland.

Finally, we reached the coast on schedule. With our tight itinerary, we decided to hike the short loop that terminated at the primitive campsite. The longer loop takes hikers along the coast and back through another trail that the park staff at the Discovery Center described as "poorly deteriorated". We were satisfied enough with our short hike to see the sweeping cliffs and the lonely sea stacks. 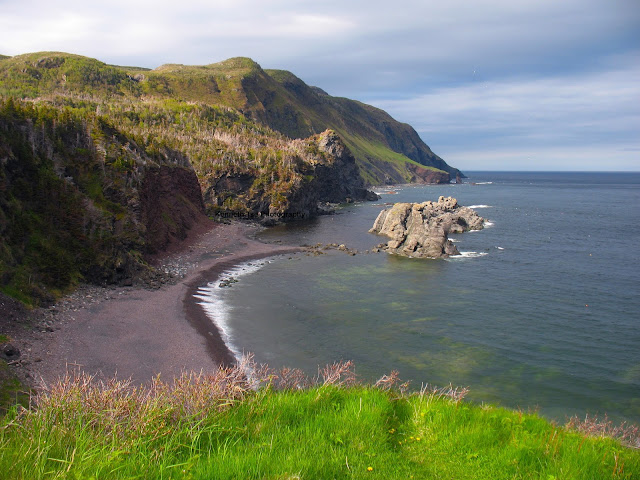 We made really good time on return hike. In fact, it only took us 1h 45min to get back, despite the more strenuous ascent on the return path. As we crested the back side of the Tablelands, I simply had to stop and give my camera some attention. 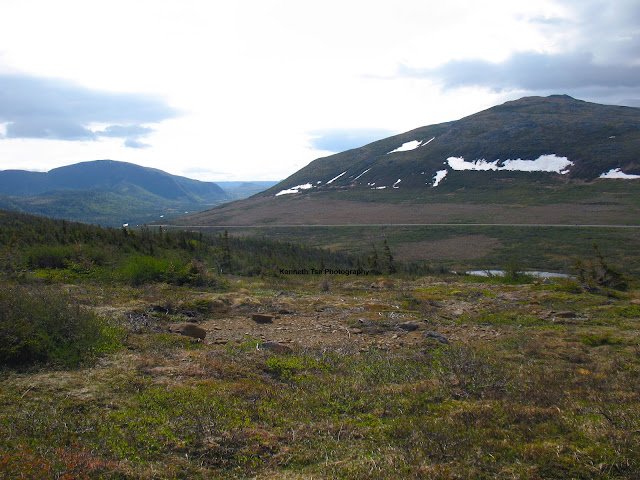 I am really going to miss the Gros Morne.

We returned to the campsite by 11:30am. While I broke camp, my sister prepared lunch. By 12:30 pm, we were ready to go. Unfortunately, we were still too late to hike Western Brook Pond. It would take about 1.5 hours just to drive to the trail head, plus another 1h to hike the return trip. This wouldn't even allow time for photographs. Sadly, we had to leave without seeing the iconic fiord. But this left us with a promise to return to Gros Morne in the future.

The rest of the day was mostly on the road. We bought groceries in Deer Lake and returned some extra canisters of fuel, ropes and tarps that we didn't even need. Then it was a long 4-hours drive on Transcanada 1 toward Channel-Port aux Basque. The landscape was pretty typical of northern Canada - rolling hills that were bulldozed by glaciers during the last ice age.

"Hey, take a look at this!" as I nudged my sister who was passed out on the passenger seat.

She opened her eyes briefly only to closed them again. The scenery was much more interesting about 30 minutes from our ferry terminal. The highway skirted along the Table Mountains on the southwest corner of Newfoundland. If only it wasn't raining and the peaks were not shrouded by heavy clouds, I might have chanced to pull over the side of the highway to photograph the area. I'm not sure if my sister saw any of it.

By 7:30pm, we arrived at the ferry terminal. The ferry could quickly reach capacity in the summer and visitors may need to wait 12 hours for the next ferry. However, we were only the 10th car in line today. The strait between Newfoundland and Nova Scotia is known to be windy and treacherous, thus ferry schedule were often delayed due to ocean conditions. Thankfully, it appeared that our ferry would depart on schedule at 11pm. We hope it wouldn't be too rough at sea and we could arrive on time at 7am next morning. 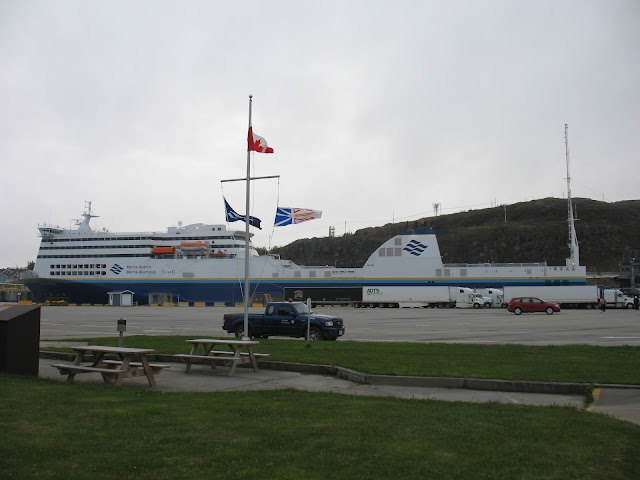