"What time is it?" my sister asked as the 5am alarm sounded.

"It's been raining since 1am. I'm going to stay in bed longer." I grudgingly said as I pulled the sleeping bag over my head. I had planned to go fishing early this morning, but with steady rain tapping the tent fly, I would much rather stay in the comfort of the sleeping bag of another hour.

Beep, beep, beep. The alarm sounds at 6am again. This time, the rain had abated enough that it was tempting enough to head outside.

It wasn't so bad, actually. There was just a fine misty rain that eventually subsided by the time I arrived at the dock. One of the reason I picked the Lomond campsite, aside from its central location and good facilities, is the quick access to a dock. I was only 5 minutes walk away to promising waters.

I had one major goal to accomplish on this trip - to catch a new species from each Atlantic provinces. My friend Eli visited New Brunswick and Prince Edward Island last May and he recommend two locations where I could catch Atlantic Tomcod, Three-spined Stickleback, Winter Flounder and Shorthorn Sculpin. Among the 4 species, I had assumed that Winter Flounder had a better guarantee in Prince Edward Island and Atlantic Tomcod was more certain in New Brunswick. Newfoundland was known to produce Shorthorn Sculpin of quality and quantity, so it was only strategic sound to target Shorthorn Sculpin at Lomond.

I had also dug up some information about Bonne Bay. Sampling report indicated that Rock Gunnel had been collected at Lomond. The nearby Lomond River delta also had a disproportionately rich number of Blackspotted Stickleback. Both species, although small, were high on my interest. Thus, my work was cut out this morning to search for all three.

Based on Eli's experience, I tied on a 1/8oz jighhead with a 1.5" green/chartreuse plastic grub and started vertical jigging along the dock posts. On the second drop, I felt a number of rapid taps. After a few drops and a number of missed hits, I decided to switch to a splitshot rig with a smaller #10 baitholder hook just to see who was responsible for these taps. I'm sure nothing can resist a fresh chunk of nightcrawlers.

Before the bait even reached bottom, it was grabbed and pulled underneath the dock. In my haste, I missed the hookset. I was expecting a big sculpin and it would be a handful if I had to pull a big sculpin out from under the dock. I dropped the bait down again but waited a little longer for the hookset this time. It wasn't a big fish, and definitely not a new species to me, but one that I was alerted to its presence in past communications. Cunner (aka Bergall, aka Sea Perch locally) is a wrasses common to northeastern Atlantic. My friends who lived or visited Newfoundland mentioned this species as the most common catch around wharfs. There was no shortage of them here. 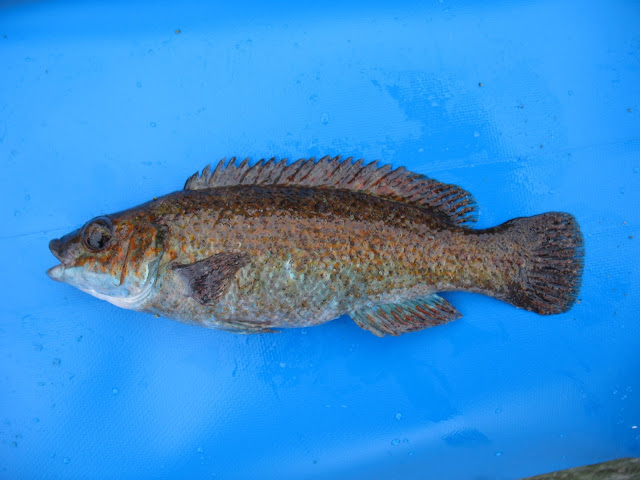 After catching a few of them, it was evident that fishing below the pier with nightcralwer will not result in anything but Cunner...and that's counterproductive when you are trying to catch new species. I started to cast this rig as far as possible away from the dock, but there were no bites until the rig was retrieved close to the dock, at which point the Cunner would immediate swarm the bait.

Since Shorthorn Sculpin is an ambush predator with a large mouth and matching appetite, I tied on the jighead/grub again to systematically work around the dock. I started casting straight out from the end of the dock into deeper water. Aside from a few bites from Cunner at the end of the retrieve, there was nothing further out.

I moved over to the right side of the dock and on the second cast, I thought I felt a thump just before the jig hit bottom. The line was slack so I tightened it a bit to set the hook, but I was immediately snagged into some seaweed. After pulling the foul off the hook, I cast right back to the area and started to slowly hop the jig along the bottom again. Right where I snagged the last time, I felt a more distinctive thump this time. I set immediately into something heavier and it wiggled back. Yep, it was a fish this time.

The fish didn't fight too hard. Its large mouth provided most of the resistance. I immediately knew what it was when the fish surfaced. On 8lb line, I had to lift this fish 4 feet up the dock. Every little wiggle of the fish threatened to snap the line, but alas, it was mine! 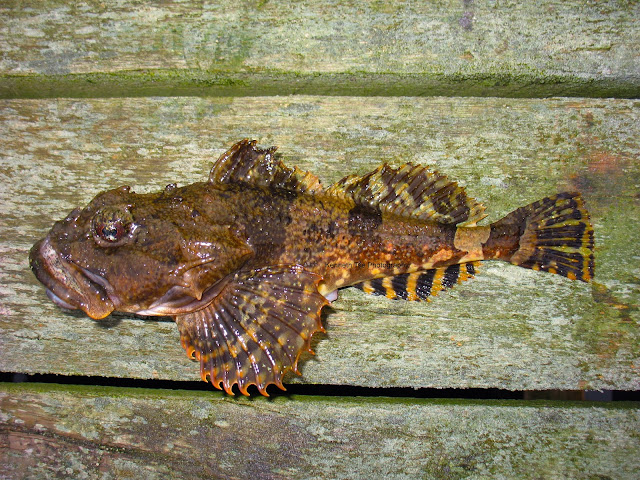 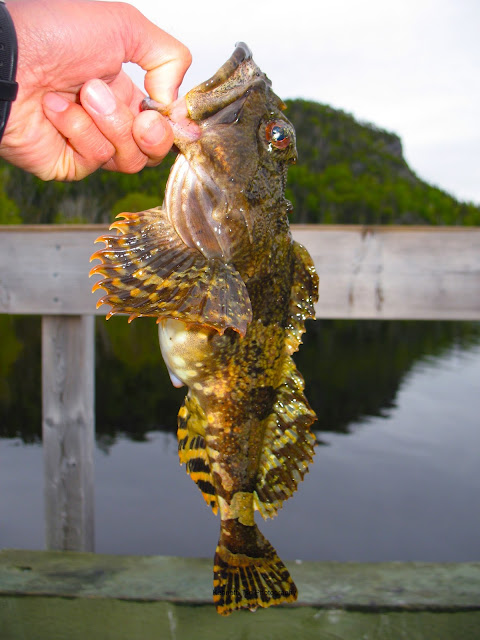 It had a pretty big appetite. This one spat out a live green crab larger than a golf ball. 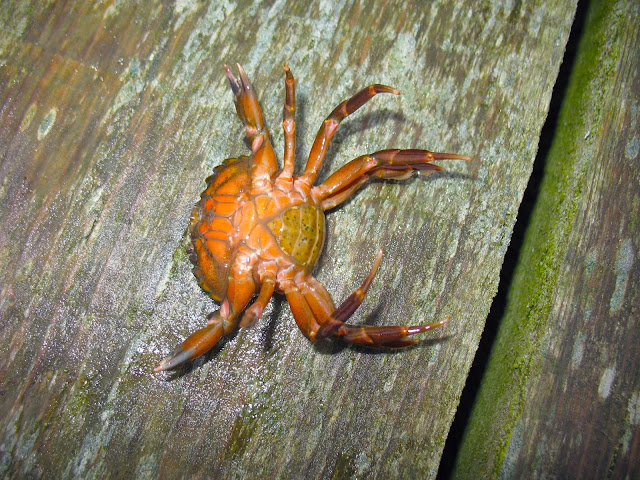 I tried for another Shorthorn Sculpin for a while but didn't find another after fishing the entire dock. On the left side of the dock, I noticed a scattered school of stickleback. With the dark colour and smaller size, I assumed they were Blackspotted Stickleback. However, they were out of reach for my tanago rod. When another school passed by the pier within reach, they were simply not interested in the fleck of worm I had to offer. I tried to wait for other schools to pass by and all of them were in a hurry to get somewhere and didn't stay to dine.

Looking more closely at the rocks at the base of the dock, I saw two long-bodied fish came out from a rock and fought for a moment before they retreated back under rocks in separate ways. Could these be the Rock Gunnel?

I started to systematically poke each crack and crevice with my tanago hook. After a couple of juvenile Cunner, I surmise that the fish I saw were likely juvenile Cunner. I also saw a juvenile sculpin darted out to examine my offering only to dart away when one of the Cunner pecked at my bait.

I read that Rock Gunnel can live surprisingly shallow. Perhaps I was fishing rock that were submerged too deep. Beside the boat ramp, there were larger boulders that were mostly submerged and rocks filling the gaps that were merely covered by water. Kelp and other seaweed grew in between the rocks, providing a lot of great cover. Perhaps this was the right habitat.

Another 15 minutes poking around this area, I saw a brick sized rock that was surrounded by patches of kelp. I dropped my bait to the side of the rock closest to me and the bait disappeared behind the kelp. I wasn't sure if the gentle taps I felt came from the waving kelp or a small fish taking the bait, so I lifted quickly and saw an eel-like fish broke surface. Yes, this has to be a Gunnel! Unfortunately, that elated feeling was replaced by utter defeat as the fish fell off the tiny point of the tanago hook back into the water.

"F--K!!!" Echoed across Bonne Bay. A few moose might have been shocked that morning.

But at least I have narrowed down the right habitat. I just have to find a second one. I decided to tie on a #26 hook with a much larger hook point than the tanago hook. I was not going to tempt fate again.

After an hour of poking around, I was all but ready to give up as the rain started again. My cuffs were wet and I was getting cold. The ripples from rain drops interfered with the glass-like condition I had earlier. It was now very difficult to place the tiny bait precisely into a crevice, but it was also very difficult to leave knowing I may not have to chance to fish again in Lomond.

I stepped on top of a bigger rock as I peered at the ledge underneath. Placing the bait as close to the edge as possible, a gentle wave just happened to wash my bait back into the crack. After waiting a few seconds, I pull gently on the line and felt a little tension. Was it a fish, or was I stuck? Perhaps it was a crab? 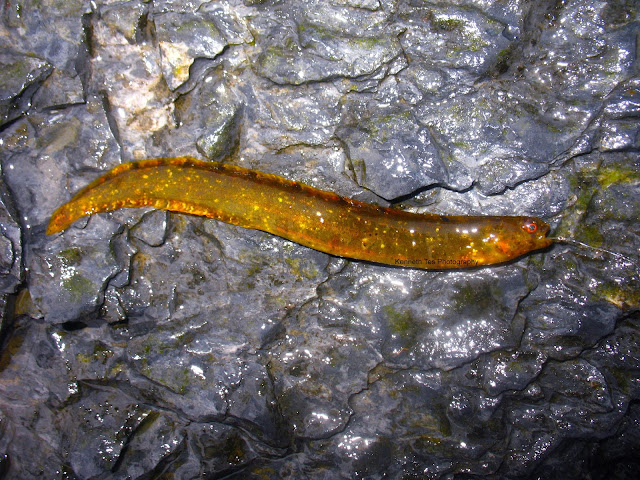 It was extremely difficult photographing this fish. The lighting condition was poor with the dark cloudy skies. If I held the fish in hand and use the flash, the flash over-compensated and drowned out everything. If I place the fish in hand further, the macro wasn't focusing. I suspected that the wet hand and the slime on the fish had something to do with macro focus. If I place the fish on the rocks, it was still difficult to focus. After 10 minutes of trying, this was the only decent photograph I had. Luckily, Rock Gunnel can breath air when out of the water. They are known to be stranded on shore on the beach, either in wet sand or under wet cobble, when the tide recedes twice a day. I wasn't too worried about keeping this fish out of the water for an extended period at all. In fact, this guy needed no time to revive when it was released, and it found itself a new rock to sit under close to shore.

With my target accomplished and my blood sugar sufficiently low enough, I decided to pack it in at 9:30am. My sister was still snuggled in her sleeping bag when I returned.

We took our time to prepare breakfast, then returned to the tent to nap for a bit. The trails were muddy and went enough yesterday, as melt water was still being drained at higher elevation. They would be a mess today and we had no interest slipping and sliding on difficult trails today. One option was the boardwalk trail of Western Brook Pond, but with severely reduced visibility, we would not be able to see the magnificent fiord in any case.

We got up later to prepare lunch, and it finally dawned on us that we could spend some time indoors at the Discovery Center.

"Hold the antler by the side of your head and pretend you're a caribou." 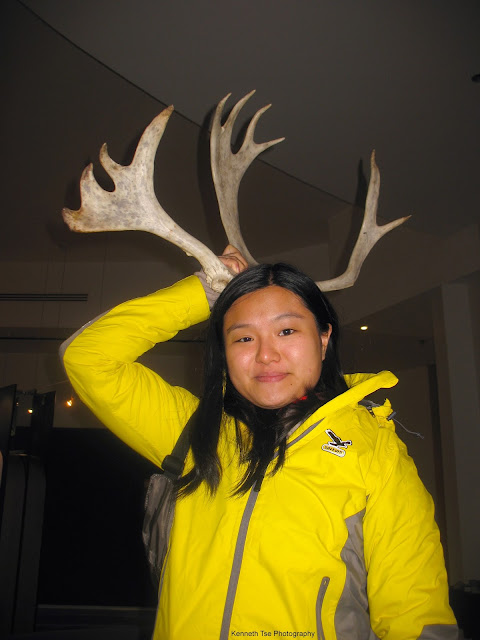 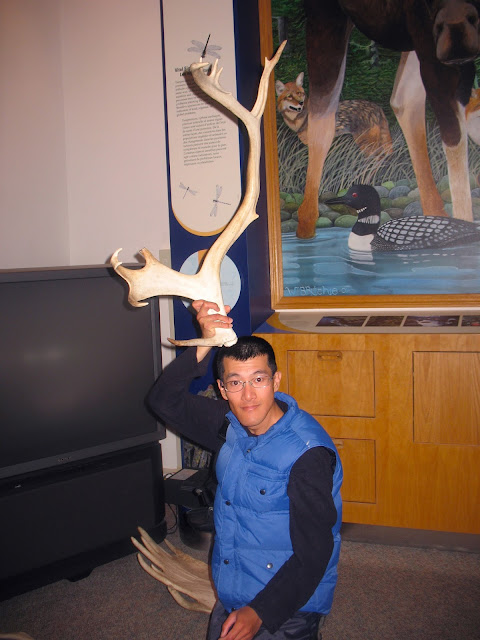 Aside from being goofy with the caribou antlers, we also read about the study done to track migration patterns of caribou in the park. We learned about their summer and wintering areas, and where caribou were likely to calf. There were lots of information on the geology of Gros Morne. We also learned that you don't have to scramble up the rocky gully to reach the summit of Gros Morne Mountain, although the alternative return route would take 5 hours to complete.

We used WiFi to check on weather and to catch up on emails. After 3 hours at the center, we had nothing else left to do. It was close to 5pm so we headed back to camp. By the time we arrived at the campsite, the rain turned into a mist again, and remained misty for the rest of the evening. Tomorrow promised to be a much nicer day, so after an early dinner, my sister and I got back into the sleeping bags for an early night.

We planned to wake up early in the morning to hike Green Gardens.

Posted by MuskieBaitAdventures at 1:54 PM