"This should be an easier hike." I reaffirmed my sister. She was a bit tired from the more difficult trails she powered through in the past few days. Instead of hiking Glasgow Lake Lookout Trail, we decided to hike Middle Head Trail in the morning, and then visit the wharf in Ingonish to grab a couple of lobsters.

At 8am in the morning, we were the first car in the parking lot. Even on this large concrete lot, the mosquitoes and midges were relentless. As long as we kept moving at a good pace, the bugs didn't bother us as much. I think this was what kept my sister moving.

As mentioned before, the Middle Head is a long, rocky peninsula. It splits Ingonish Bay into North Ingonish Bay and South Ingonish Bay. The trail is mostly level with only a few rugged areas of roots and rocks. Steering Island, at the tip of the peninsula, often hosts nesting seabirds. Thus, this trail is fairly popular with day hikers.

The scenery wasn't spectacular, especially since we've already been spoiled by Gros Morne. It was still noteworthy enough for a few pictures.

This trail seemed to be popular with local cross country runners as we saw 3 in an hour. They were pretty courteous and gave us a heads up with adequate time for us to let them pass.

After the hike, we returned to camp to cook breakfast and break camp. By 11am, we were ready to grab a couple of lobsters from Ingonish. Buyers beware, the fishermen don't usually have change. It's best to carry small change with you. We needed ice anyways, so we broke a $20 bill getting a block of ice and had exact change for the two lobsters that were waiting for us. Our two lobsters averaged 1.5lb each at $5.50/lb.

We drove north to Cabot Landing Provincial Park. In 1497, Giovanni Caboto, an Italian commissioned by the British crown to search for a new passage to the Orient, landed Atlantic Canada. There are debates where he actually landed. At Cabot Landing Provincial Park is a National Historic Site cairn and bust recognizing the popular local belief that John Cabot landed at Aspy Bay. However, at the 500th anniversary, the Canada and United Kingdom designated Cape Bonavista, Newfoundland as the "official" landing site.

Regardless, visiting the area prompted us to recall some history lessons we learning in high school. 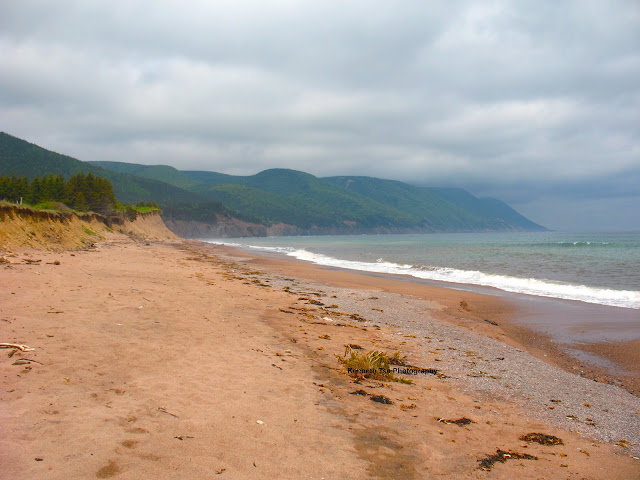 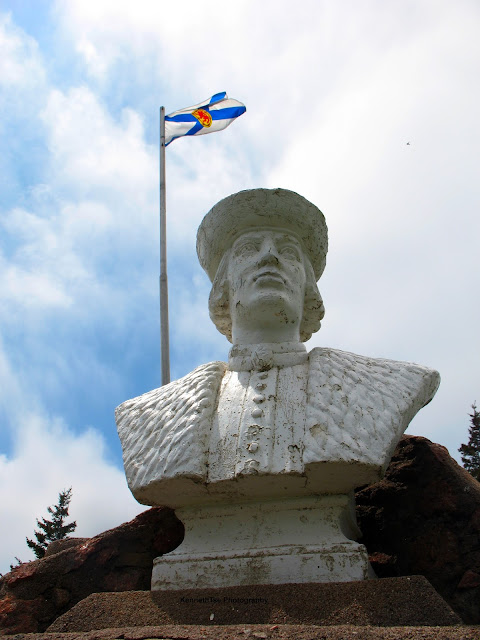 We drove past the little dirt road to Glasgow Lake Lookout Trail enclosed in dense fog. It was a good decision after all to forgo that hike today. We wouldn't be able to see much anyways, and the limited visibility would make navigation difficult.

The Cabot Trail took us to Aspy Fault. The sky was gloomy and my sister's camera was out of battery. "I'll wait in the car while you take the pictures." She wasn't too enthusiastic about getting out of the car. On a perfect fall day, she may feel differently.

The Aspy Fault dates back to the Ordovician, the same period when sediments were accumulating to form what would be Gros Morne Mountain. This strike-slip fault is thought to be the collision zone between two continental plate, at the same time that the seafloor was pushed upward to form the Appalachians. I hadn't plan on hiking the Aspy Trail, but it will be one of the top trails to hike on my next visit. The area was simply enchanting.

Past Aspy Fault, the Cabot Trail rose sharply in elevation. Our car hugged tight to the road as it undulated along the side of valleys and traced the spines of mountains. Suddenly, we were up atop at a highland plateau looking over the MacKenzie River canyon and the MacKenzie Mountain.

"The sky isn't looking better. We should hike Skyline before it rains."

The thick clouds were most foreboding for heavy rain and they threatened to steal our only chance to hike the Skyline Trail on this trip; and we were not about to leave Cape Breton without getting a glimpse of the picturesque west coast of the cape.

Skyline Trail was well marked and level, suitable even for young children and the elderly. Along the way, interpretive signs described the impact of moose on this region. Following spruce budworm outbreak that decimated many of the balsam fir forests, the strong moose population is slowing the regeneration progress in the Cape Breton peninsula. Our trail passed through many stretches of land that were deforested and young trees were sparse. 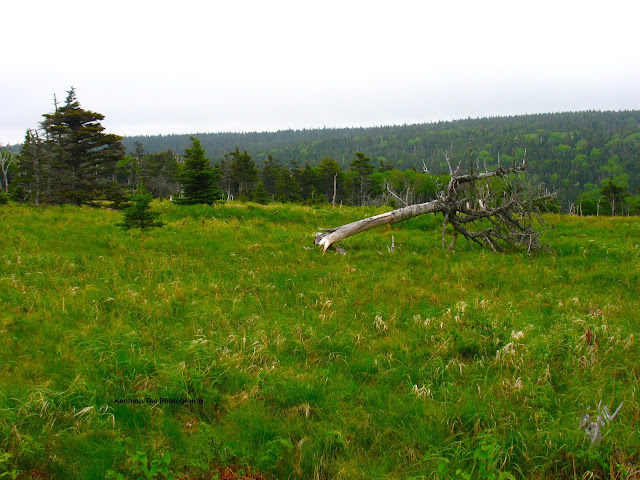 About an hour into our hike, we finally got a glimpse of the Cabot Trail. 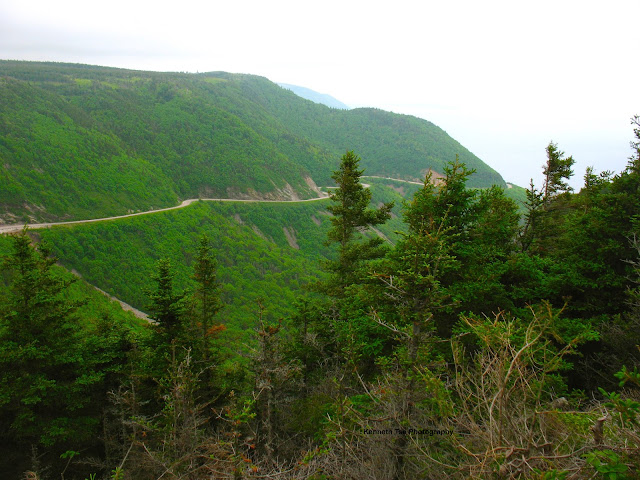 The headland is carpeted with unique plants in this harsh environment. These plants clung to life on surviving on limited substrate and their low profile enabled them to withstand the characteristic strong wind that never cease to pound the bare cliffs. 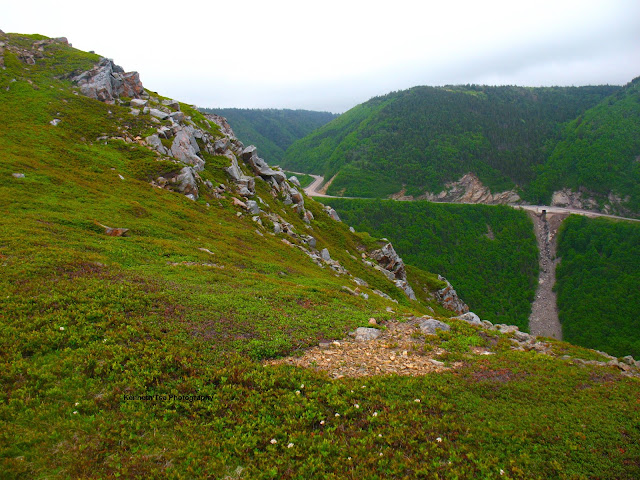 A panoramic view of the headland and the Cabot Trail at the end of Skyline.

Despite official signage to keep visitors off the vulnerable green carpet of headland plants, many still ignored the warning and trampled wherever they desired just to get a selfie shot of themselves at the edge of the cliff. This blatant disregard for respect toward natural and cultural reserves is a huge pet peeve of mine, and I couldn't stay too long in the area watching the disrespect unfold.

We continued our way down the Cabot Trail. A quick pull-out allowed us to admire the headland where we had just hiked. 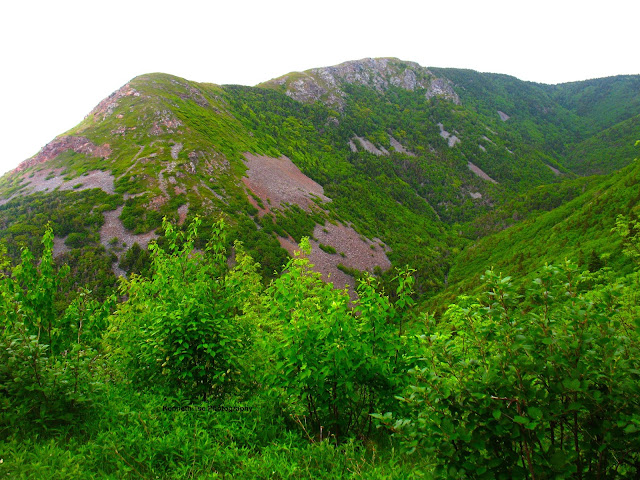 Not too far down the road, we stopped at two iconic views that are highly publicized on any Cape Breton promotional material. We were blessed with a break in the clouds as curtains of sunlight illuminated the hills!

The view from Veteran's Monument.

A look at Petit Etang with the Cabot Trail slipping between coastal valleys.

We made it to Cheticamp just 10 minutes before the park office closed at 6pm. My sister and I were wondering how to cook our lobsters, and an amazing idea popped in our head. We had two extra aluminum cake pans. Since our campsite had a fire pit equipped with a grill, we'll have fire roasted lobsters!

The plan was good if we can get a hot enough fire burning. After burning all the tinder we've collected at our campsite, the bigger fire logs has yet to catch on. We didn't have a hatchet (too heavy for luggage) to cut some kindling and it was looking like a failure until a fellow camper beside us offer his hatchet to us. It was the dullest hatchet I've ever used, but we were able to get a few smaller pieces of wood chopped and a stable fire was burning.

My sister modeled with our dinner guests. 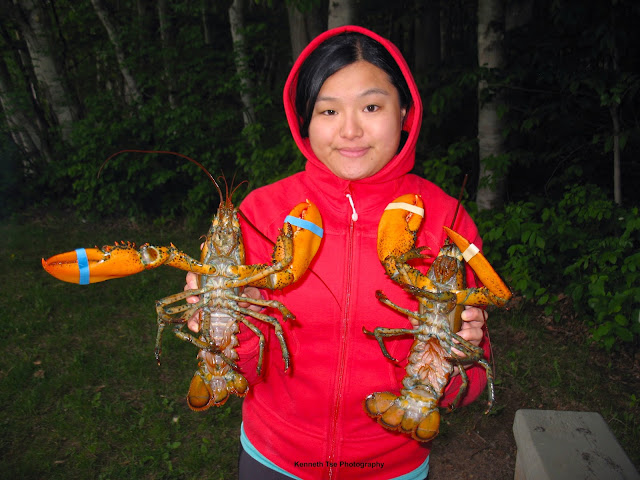 Since we had limited space in the cake pan, the lobsters could not be cooked whole. Instead, the carapace was removed (saving the lobster fats!) and the claws were detached. I can't remember how long it took to cook the lobsters, but we keep an eye on it as we set up camp. A storm was rumbling in the distance and we wondered if dinner could be served before the rain.

Finally, dinner was served! We were so excited! 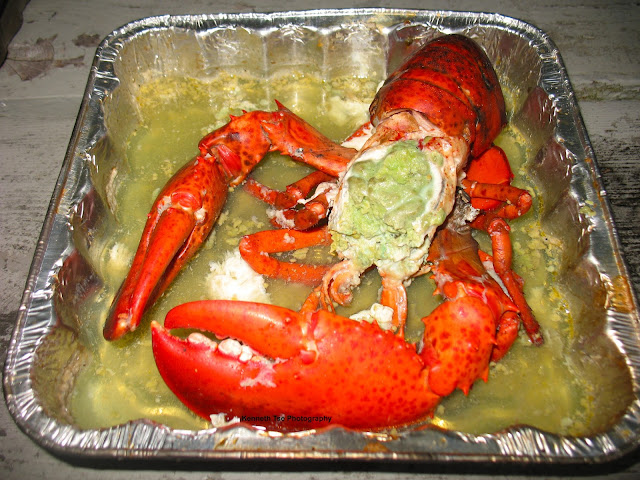 We thanked our neighbour with a couple of lobster claws when we returned his hatchet. His original dinner were hot dogs and buns so he gratefully welcomed them. Who can resist fresh lobster claws cooked over an open fire?

Our lobsters were just cooked and they remained tender without becoming rubbery. The lobster fat was the sweetest green nectar I've ever tasted. Saving the best for last, the claws were meaty, juicy and sweet as honey. These were definitely the best lobsters I've had in my life!

After dinner, we were satisfied but exhausted. We'll be driving to Prince Edward Island tomorrow and it would be a long 4 hours on the road. As we fell asleep, small sprinkling of rain started to fall.