Yes, we had a tight timeline today - breakfast at 7am, groceries at 8am, Home Hardware for camping supplies by 9am, and hopefully we can begin our way toward Gros Morne by 10am. The sense of urgency was palpable and for a good reason. I wanted to switch our campsite from Shallow Bay to Lomond.

By 9:45am, we were speeding (figuratively speaking) toward the gate house at the southern end of Gros Morne National Park. We flashed our annual pass to the lady at the gate, then I asked sheepishly, "I have our campsite booked for 2 nights at Shallow Bay. Is it possible to change our booking so we can have a site at Lomond?"

"It shouldn't be a problem. We're not very busy at the moment and there should be a lot of empty sites. Just go to the gate at Lomond and they will find you a site."

There wasn't anyone at the gate in Lomond, but there were some self registration sheets and envelops. We drove around the sites and picked #35, and stated specifically on the sheet that we'll have #32 as a backup. Here was our Shallow Bay registration number - the sites were paid in advance. Oh, and we won't be back until 6pm. We had a couple of trails to hike in the afternoon. I hope all of that was clear on the registration sheet.

They never came around once to confirm or to check during the next 2 days. I guess it was all good.

I can relax a bit now that we had relocated our campsite to a more central location. You see, Lomond had the most convenient location for our itinerary but it was a walk-in only campsite. Without advance registration, it was much too unpredictable for my Type A personality. What if we arrived and there were no sites available anywhere? In hindsight, June had so few visitors that we could set our tents basically at any empty site.

Lomond was also located in a beautiful setting. It was a much better view than Shallow Bay. 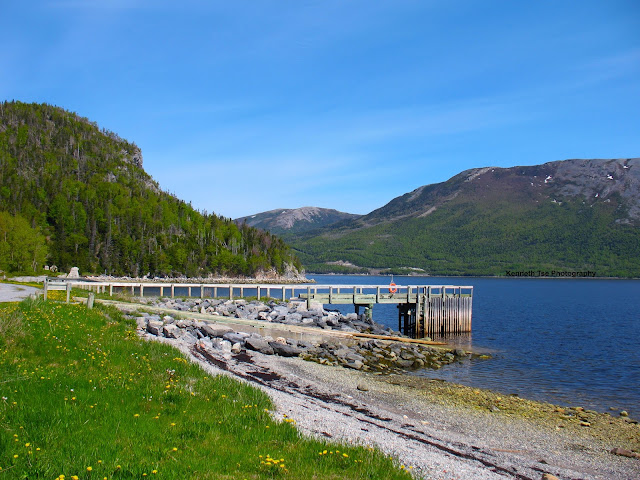 A single frame photograph simply could not show you the big picture. (click on the picture to see it in full screen mode)

Halfway through our 1-hour drive, we had to pull over to shoot more photographs. 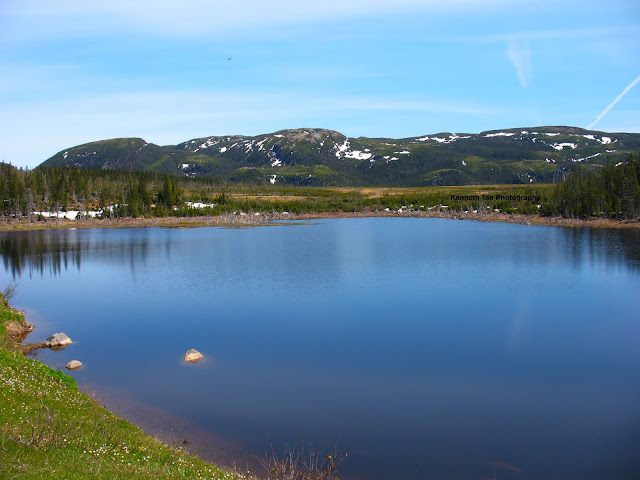 There were 5 cars at the trail head of Gros Morne Mountail Trail. It was good to know that we weren't alone, yet it wasn't extremely busy. We grabbed a couple of apples, some granola mix, a small tub of coleslaw and a small tub of potato salad for lunch, a couple bottles of water, and filled the rest of the backpack with extra clothes. We'll be climbing at least 400m on the hike. Since there were still snow on the mountain, it could be cool even at the foothills.

"Watch out, there's another pile of gold." my sister warned for yet again. There were moose droppings all along the trail. Sometimes, it appeared moose had a forest convention beside the trail and covered the area with their "gold" and their prints. We knew Newfoundland was over-populated with moose but we were not expecting this many moose.

We hiked though the half hour under the shade of boreal forest. As we steady climbed through roots and the occasional set of wooden staircases, the trees appeared shorter and shorter. Then suddenly, we popped out into a meadow with our first view of Old Crow, a mountain spine adjacent to Gros Morne. 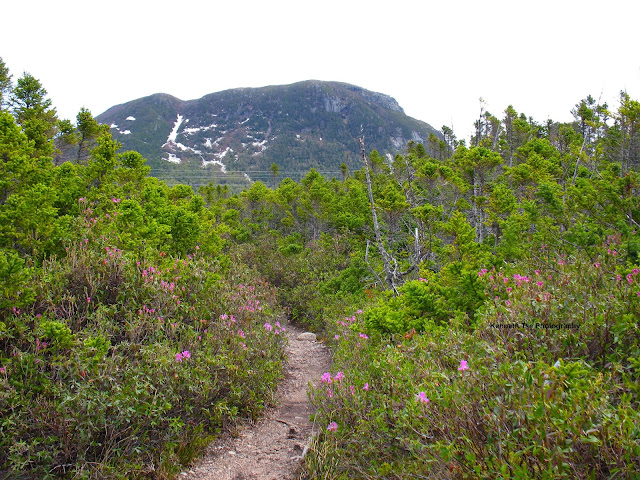 What makes Gros Morne so special, and its qualification as a UNESCO World Heritage Site, is its geology. The park illustrates the concept of plate tectonics. The cap of Gros Morne are sediments that were deposited into the Iapetus Ocean during Cambrian and Ordovician periods, forming a broad continental shelf. It is very different from the ancient shield rock found in the Long Range Mountains. If you are interested in reading about the unique geology of the area, please visit the link below.

It wasn't long ago that winter had departed. Where the trail was well shaded, we found remnants of snow. 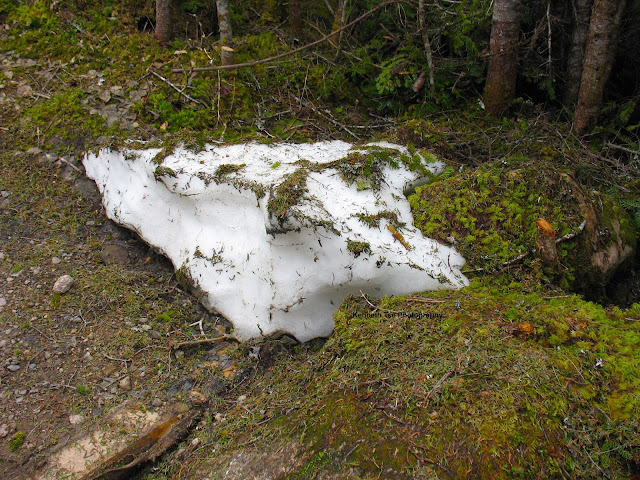 Wonderfully, the day was warm and we were very comfortable in a fleece sweater. Due to the longer than usual winter, the mosquitoes were minimal. My sister still got bit a couple of times.

"Can you slow down a bit?" my sister asked.

"I thought you go hiking in Hong Kong." I replied.

"Yeah, but we usually climb concrete stairs in Hong Kong, not roots and rocks." she snapped.

"We can't slow down too much. We have to stay on pace."

About an hour into our hike, we stopped at a designated lookout for some water and an apple. The view was impressive and it was best to share our view as a panaroma.

The higher we went, the shorter the vegetation. Soon, trees were no more taller than our height and the area was dense with alpine flowers. At last, we arrived at the valley between Old Crow and Gros Morne Mountain. In the middle of the valley were a set of ponds connected by a stream. While crossing the stream, I saw Brook Trout spooked away from the boardwalk. This wasn't a fishing trip and I didn't pack a rod for the hike, but I suspect they would easily fall for a small dry fly. 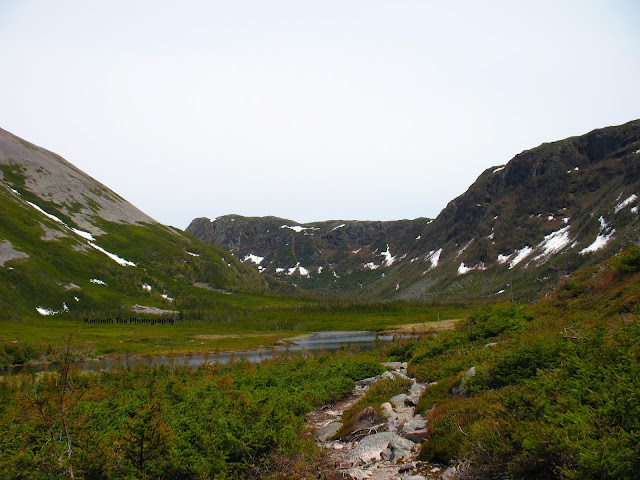 After crossing the valley, we came to the base of a rocky gully. In order to summit Gros Morne Mountain, one would need to climb this rocky gully. Unfortunately, even if we wish to climb the gully, the summit was closed to hikers to protect nesting rock ptarmigan.

"We're going to climb that?" my sister asked worriedly.

Just then, we heard a rock slide further up the gully. A large boulder tumbled down, kicking up rubble and dust behind it. Luckily, the remaining snow stopped its track before it fell too far. The melting snow was causing rocks and boulders to dislodge. As adventurous as I was, I wasn't stupid either.

"Ok, maybe we'll climb just a quarter of the way up." 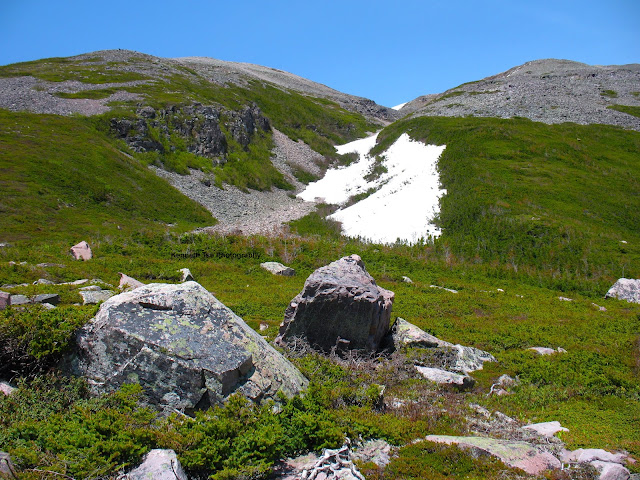 We saw a moose higher up the slope and that was enough motivation to push my sister onward so we can take a better photograph. Still, we only got a grainy picture with her 50x zoom. The photograph is on her camera so I don't have it at the moment to post it here.

However, the view was well worth the climb. 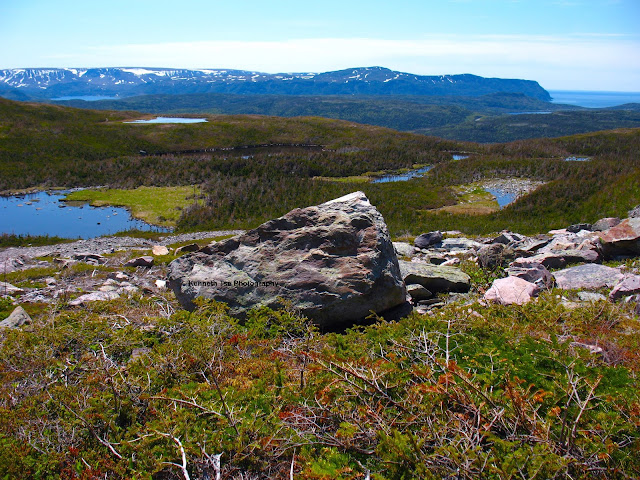 And again, only panorama truly justify our view of Old Crow and Bonne Bay far in the distance.

Soon it was time to return. We still have another hike planned for the evening. 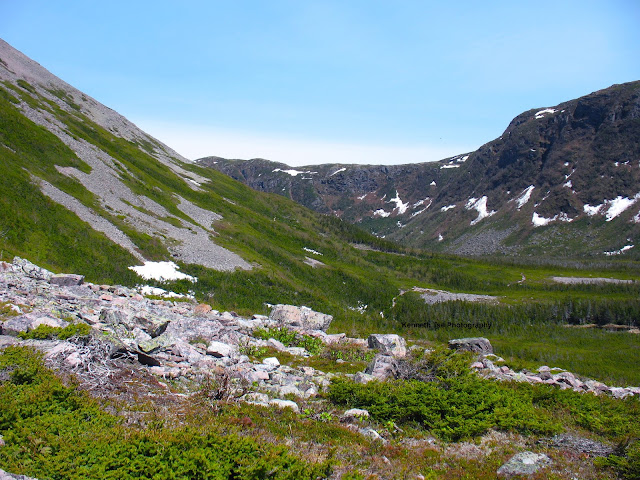 During our hike in, we only saw one older couple. On our way back, we saw three other groups of hikers. We were happy to enjoyed our hike with very little traffic. With the clouds cleared out and the sun beaming down, the alpine flowers blossomed brilliantly. 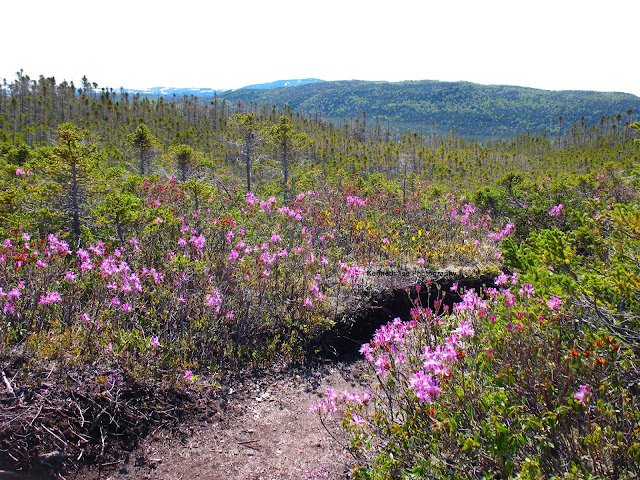 We stopped at our midway point to snack on coleslaw and potato salad. I should have taken the time to take better photographs under clear skies, but we were on a time crunch. Sometimes, I wish I can simply sit back a bit and enjoy the moment a bit more.

Back at the car, we had to remove our sweaters and changed into T-shirts. It was much warmer than we had expected. Turning on the AC, we drove back toward Lomond and continued onto Bonne Bay. Finally, we had a glimpse of the Tablelands. 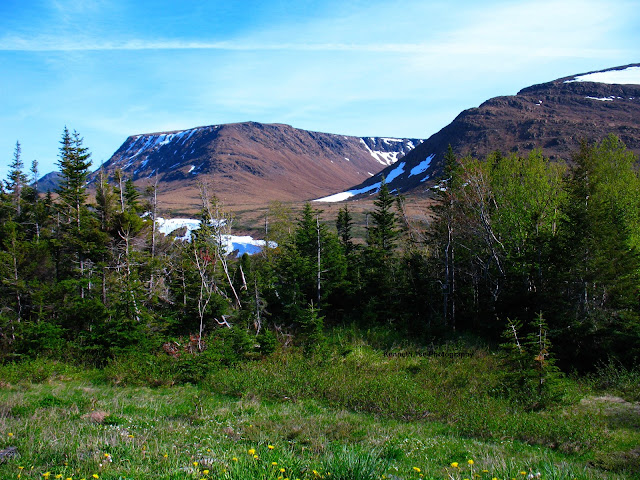 The Tablelands originated within the Earth's mantle and it was thrust upward from the deep ocean during plate collision. The rocks are poor in nutrient and high in heavy metal, thus there are little to no vegetation on this barren landscape. The area seems completely displaced, but it is what makes Gros Morne National Park so unique.

From the parking lot, we could look down the valley carves through the Tablelands. It is quite dramatic to see the split between the barren Tablelands on the left and the richer coastal headlands on the right. I'll discuss more about the coastal landscape a couple of days later when we hike the Green Gardens Trail. 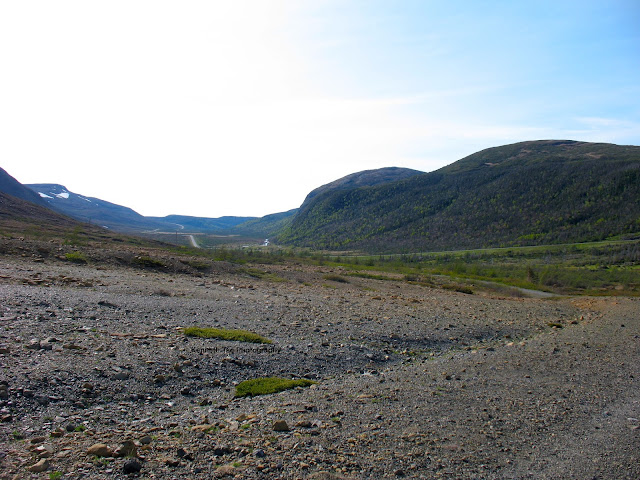 "This is nice, much easier than the gully at Gros Morne Mountain."

My sister commented on the level and gravel covered trail that leads to the the valley between two headland of the Tablelands. It was a quick and easy hike that most people can appreciate. Personally, I like the challenge and sense of accomplishment of a rough trail. Rougher trails also deter many people so you can often hike in solitude. Even so, it was early June in Gros Morne I could count the number of hikers on the Tablelands trail with one hand. I would suspect many more people on this trail in a few weeks. 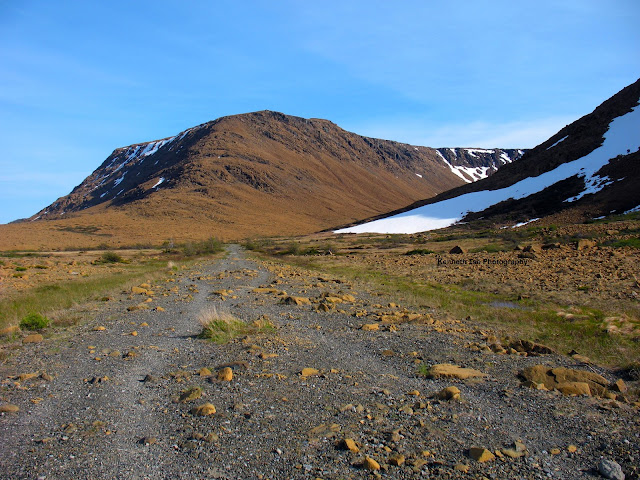 Along the trail, there are some evidence of life. Pitcher plants clung to life wherever water seeped out of the ground. These carnivorous plants are able to survive by supplementing their nutrient intake with unfortunate insects that had fallen into their pitcher - an adapted leaf filled with digestive enzymes to help the plant obtain nutrient.

Meltwater also collects in the valley to create streams and small cascades. 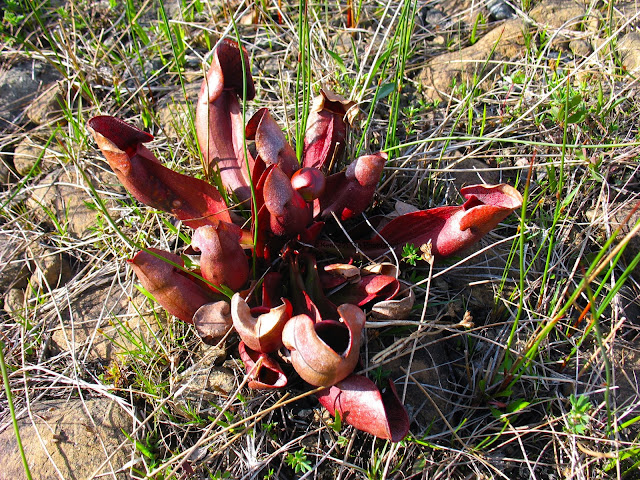 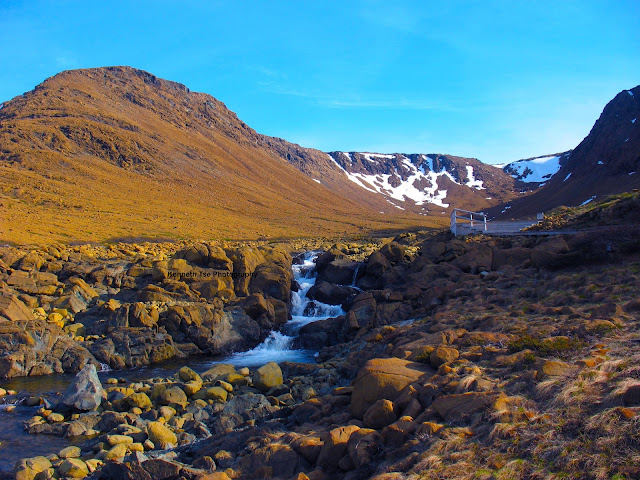 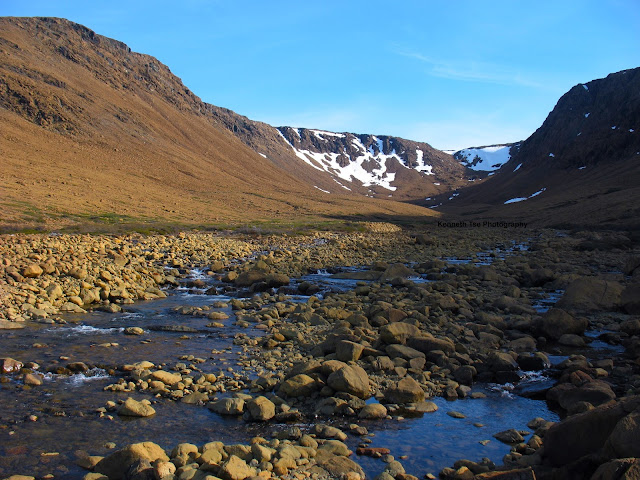 The true beauty of the area was best shared as a panorama.

We were lucky to have completed the hike before the sun dipped below the mountain tops. Pictures would not have appeared as vibrant and rich otherwise.

On the way back to Lomond, we stopped at the Discovery Center for a quick washroom break and to check on the weather report. It appeared the forecast has gone from bad to worse. We could expect rain all day tomorrow from early morning to late evening. Tomorrow could be a complete write off.

Before we left Bonne Bay, we took advantage of the setting sun for a few more snaps. 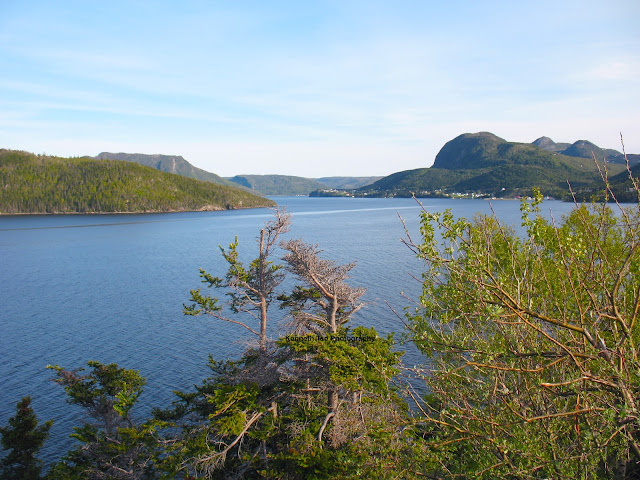 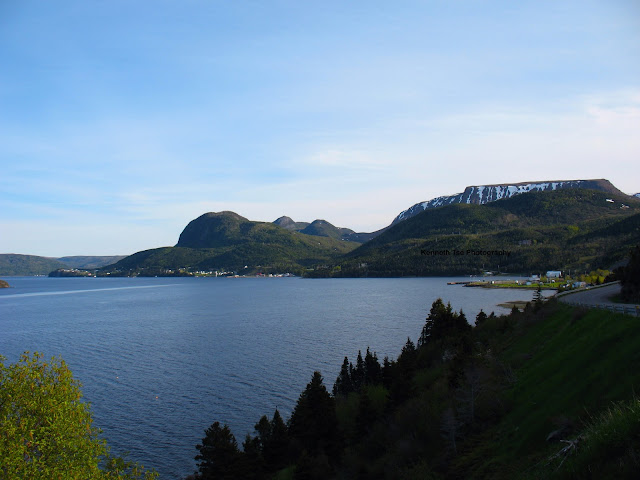 With the longer spring days, we were setting our camp at 8:30pm in good light, and managed to cook and clean after dinner just before it got dark. I bought an MSR Pocket Rocket stove specifically for this trip and it performed fantastically in light wind. We boiled macaroni and heated up some roasted chicken in less than 10 minutes total at low-medium burn. It's so compact and lightweight that I don't think I can go back to a propane stove.

Last night was the coldest night of our trip as the mercury dipped down to 2C. Tonight was relatively warmer with a low of 5C only. In our fluffy -7C sleeping bags, we were quick to fall asleep.