"Should we get up?" My sister asked as I switch off the 5am alarm.

I poke my head out the tent door to see a cloudy sky. I guess our morning photography session was scrapped.

We didn't want to stay in bed for too long though. Rain was predicted for late afternoon and I had originally planned an evening of fishing in Nova Scotia's Boutiliers Point. The annual influx of Atlantic Mackerel into the harbours and bay around Atlantic Canada was drawing near, and I really wanted to experience fishing for the plentiful Mackerel.

We got out of bed at 6:30am. The rain had stopped for a while and thankfully our gear was starting to dry. It would suck to have to fly home with a wet tent. We barely made our luggage weight limit on our flight to Newfoundland.

By 7:30am, we broke camp, had breakfast and even had a shower. We were ready to roll!

The flowerpot islands were less impressive under a cloudy sky though... 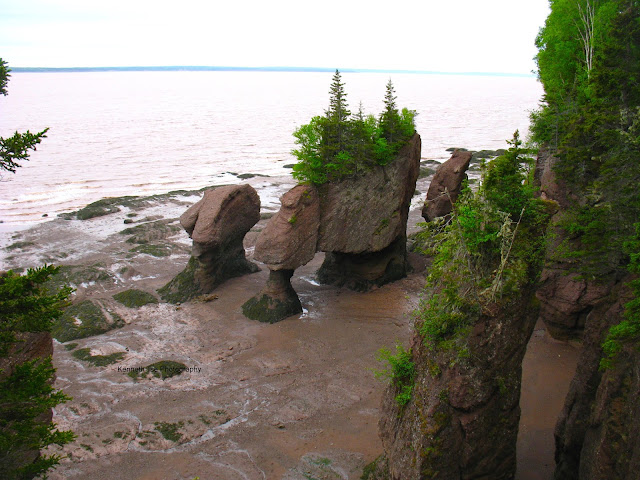 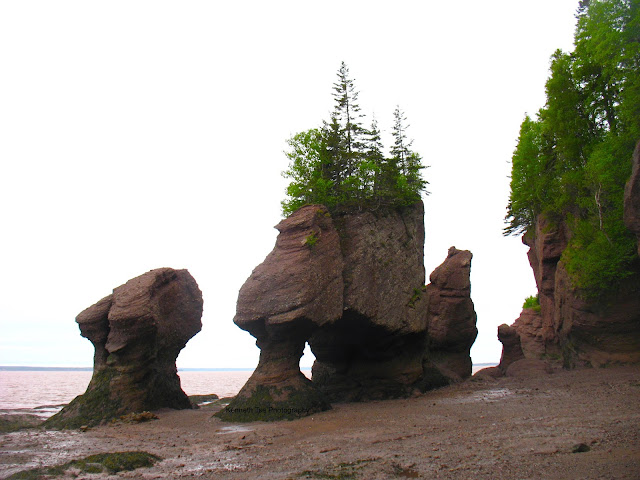 Cutting our losses, we decided to drive to Boutiliers Point early. On our way through Moncton, we saw a tall church tower and decided to seek it out. When we were reading a plaque detailing the Catholic cathedral, a lady came out, spoke very rapidly in French with an unwelcoming tone.

When we replied her in English that we couldn't understand French, she simply said they were not open to visitors. It was a bit disappointing as it was Cathédrale Notre-Dame-de-l’Assomption, one of the oldest churches in Canada, and we were Catholics being turned away from a church that we should be able to visit.

Across the street, we noticed a fish market that luckily welcomed our visit. We bought half a pound of scallops, a pound of quahog clams and a piece of smoked herring and quickly forgot about the church.

Following my GPS navigation is always interesting. On this day, we almost went for an hour extra detour when I was given direction to follow Highway 2. However, recalling my mental map, there should be a shorter and more direct route by following the toll Highway 104. Luckily, I caught that GPS error quickly enough that we were not misled.

Around halfway toward Truro, I had to stop for a washroom break and pulled over at a truck stop/restaurant.

"Those guys were all looking at me weird." I pointed out to my sister. "Did they stare at you as well?"

"It was as if they had never seen an Asian before." She laughed. Funny as it may, I had never felt such an unwelcome vibe in Canada.

"Let's just get out of here." I simply wanted to get out of that strange place.

Two hours later, we arrived at Boutiliers Point by 2pm. The sky was cloudy but it wasn't raining and the wind was light. I may just luck out with a few hours of fishing. My sister was happy to prepare lunch while I fished.

The first hour was relatively unexciting as much as fishing can be. I caught a number of Cunner under the pier but nothing jigging a jig and grub. Speaking with the few people who were scouting for Mackerel, all of them agreed it was still too early. There was a very short run of them during the days in May but the Mackerel had not been seen or caught since. I knew mid-June was just the start of the Mackerel season on most year so my expectation was kept extra low, but I was hoping to get lucky.

Soon lunch was ready and I took a break for lunch. 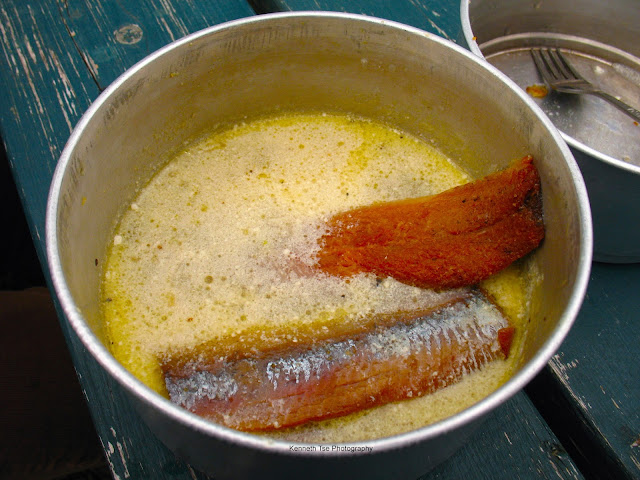 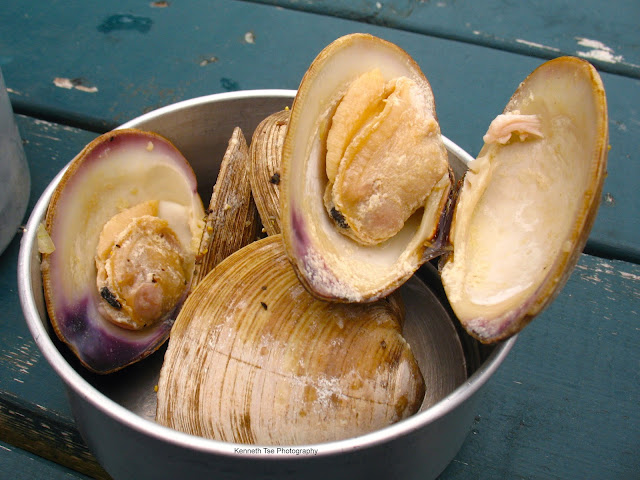 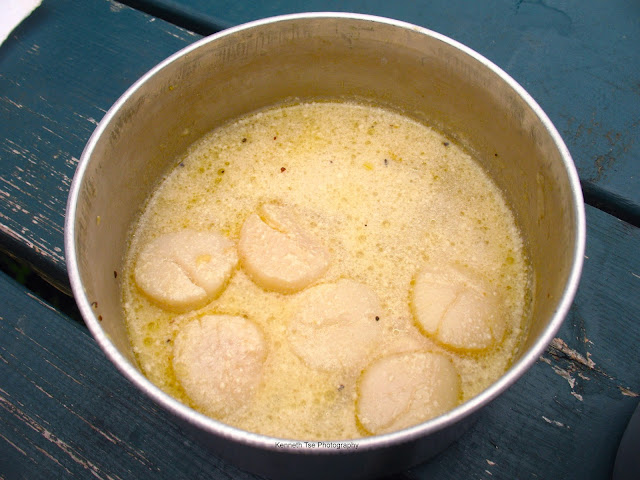 The clams and scallops were perfectly cooked in the lemon pepper cream sauce with a small portion of smoked herring to add a briny, smokey flavour. However, the smoked herring were way too salty to eat on its own. I don't know how locals eat them like candy. No amount of water was able to quench our thirst following our meal.

Returning to the pier on a full stomach, a family was fishing at the corner of the pier. They were new to fishing and trying to help their son catch a fish. Using a spoon, the son eventually hooked a sculpin. Unfortunately, the fish came off before it was landed. The sculpin appeared much longer than the usually robust Shorthorn Sculpin, so I was suddenly excited. Perhaps it was a Sea Raven or a Longhorn Sculpin. My quest for a new species from Nova Scotia resumed!

Casting one rod with the dropper loop rig as far as I could baited with nightcrawlers and fished a jig and grub on the shorter rod. It took little time before a fish found the nightcrawler and it was a small Shorthorn Sculpin. 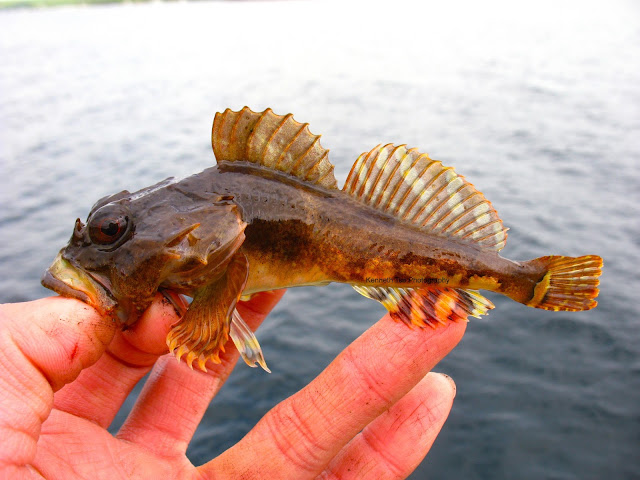 Keeping faith that the sculpin the boy lost was not a Shorthorn Sculpin, I waited another 15 minutes before finding out my next bite was the all too common Winter Flounder. 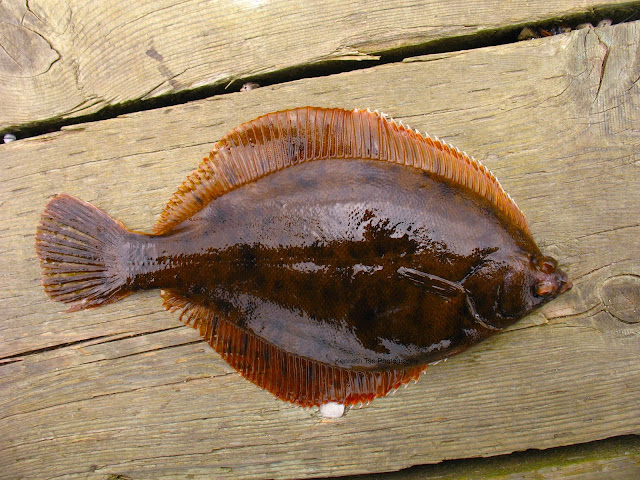 Seeing that all the bites came on the nightcrawler, I held the surf rod in hand to fish the dropper loop rig more actively with a slow retrieve on bottom. Two casts later, I felt a good tap and set the hook into a larger fish. Finally, I got what I was looking for! 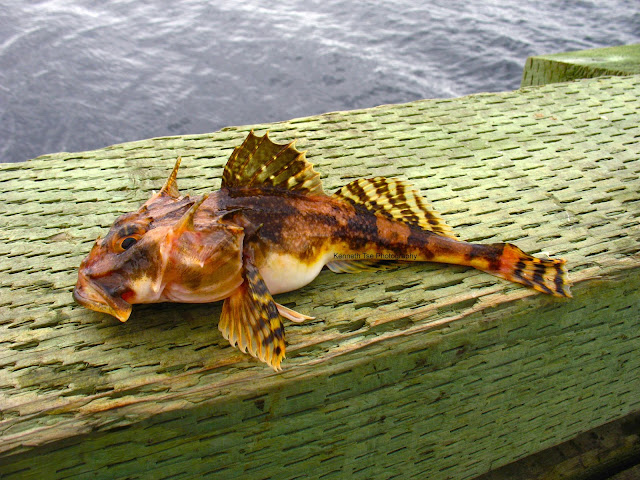 They look so badass! I was so happy and relieved to add this species as my lifer from Nova Scotia. Thus, I had completed my goal to catch a new species from each Atlantic Canada province!

Perhaps the tide had changed after our lunch break. The fishing continued to improve. I caught a second much smaller Longhorn Sculpin, and one more Winter Flounder, before catching the biggest Longhorn Sculpin on this trip. 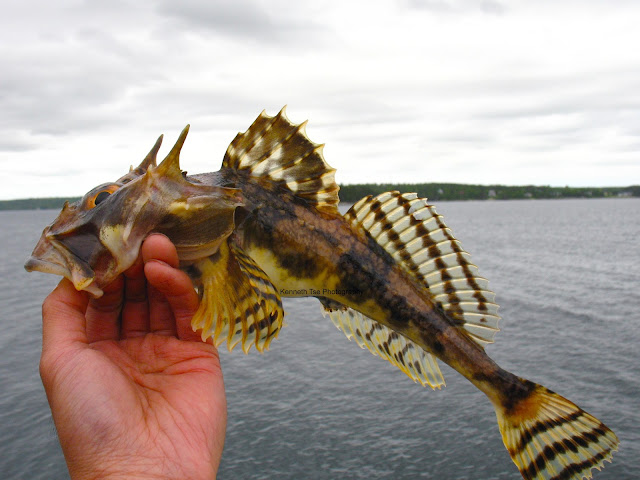 They were so cool. They would flatten their mouth to expose the opercular spines, and then contract muscles inside to produce a buzz similar to a cell phone on vibrate. It was a bit freaky to hold a buzzing fish in hand. 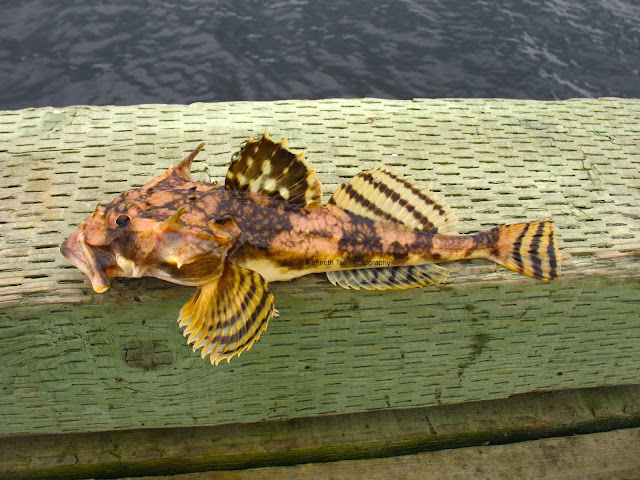 It appeared as though I had caught all the sculpins in the area; so I looked at some micros closer to shore. One angler said there were some juvenile Red Hake see recently. I saw some small copper coloured fish and was hoping that they were Red Hake. However, they were simply juvenile Atlantic Cod. 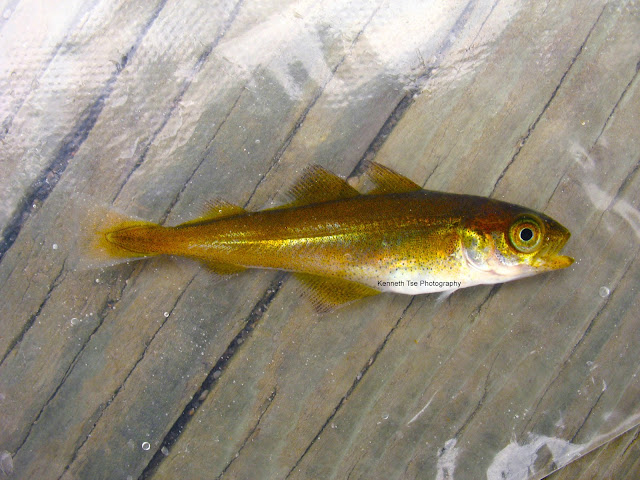 I caught another juvenile Cod before it started to rain. It was already 5pm and my sister needed a washroom break. I decided to finish the fishing session.

Checking into our Howard Johnston Bluenose Inn and Suite, we were not impressed at all. There were a few rough looking people smoking pot by the stairs and drinking beer.

"Those guys creep me out." My sister sneered.

"Yeah, me too. Make sure to lock the door and use the chain lock as well." I warned.

It was raining hard outside and we had a lot of gear to pack. It took 5 trips before we moved all our gear into the room. We spread as much gear as well could on the floor to dry and started to pack away anything else that we would not need the next day.

I was hoping to prepare dinner at a park tonight, but with the rain falling earlier than forecast, I ended up cooking dinner outside on the hotel balcony. It probably wasn't legal, and I was keeping as low profile as I could. I'm sure it would be a cause to get kicked out of our stay if the manager found out.

With nothing to do but to watch TV and reply email, we went to bed before 12am.

Posted by MuskieBaitAdventures at 5:43 PM