If only I had known about this spot from the start of the trip...

That was what I said as we were fishing this location...and I continue to say it upon returning back to Canada...If only I had know about this spot from the start of the trip...

With only a morning to fish before we had to leave for the airport at 12pm, George suggested a shore spot where Captain C had taken George to fish in the past. This location is no real secret. In fact, I had identified it as a potential spot to catch a number of reef species while scouting on GoogleMaps. But if only I had fished it early...or spoke to George about fishing there...

There were a lot of species to be caught in this area. George promised that we would catch a Pacific Frillfin at the minimum.

I started poking around the rocks and tidepools with a tenkara rod and a tanago hook. There was a couple of juveniles of a particular species that I still can't figure out what they might be...but they had black and white vertical bands on them and they were somewhat interested in stripping my bait so I kept trying.

Not long later, Jeff caught a beautiful little fish that he couldn't identify. I knew what it was...and I saw a few of them flirting in the tidepool...and it took no time to catch one. 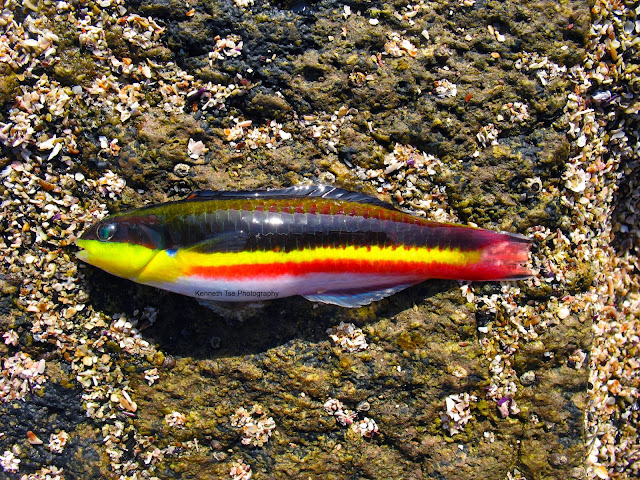 As I was resting my Cortez Rainbow Wrasse in a little tidepool in better pictures, I saw a head poking out from under a large rock. I dropped the bait right in front of the little fish and caught the fish that George promised. 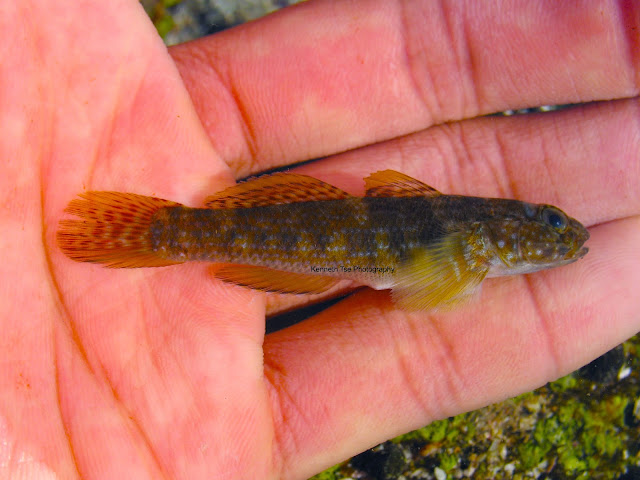 With both fish photographed and released, I started to look for other species. George said he had caught Pacific Night Sergeant from these tidepools. I didn't see any Night Sergeant, but there were a lot of small blue fish in the more turbulent area of the tidepool. Trying to present a bait to these little blue fishes was difficult. Not to mention the number of generic brown damselfish that grabbed the bait first. Luckily, a few of these generic damselfish were a new species. 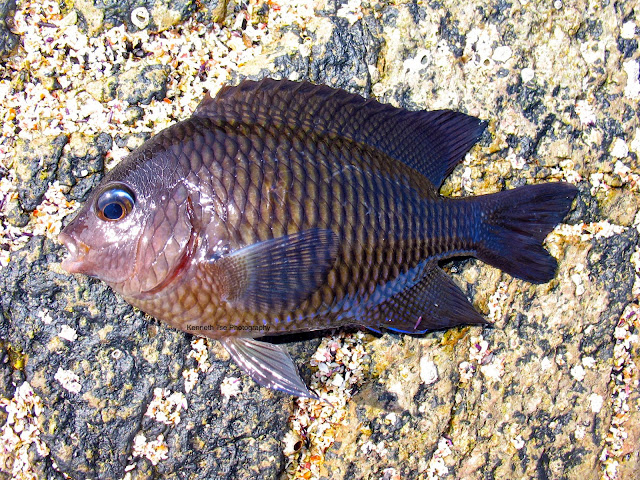 Then I saw a Banded Wrasse coming in and out of the tidal surge in the tidepool. It was difficult trying to present the bait to that one particular fish in the tidal surge and I was trying to concentrate. George caught a Night Sergeant, and then a couple more, while I was trying to catch the Banded Wrasse. He was constantly suggesting me to try his rock and I finally snapped back at him to be quiet. I was finally getting the Banded Wrasse to hit when the fish pulled me into a rock and snapped the line. I simply couldn't concentrate on my task to pull the fish out among the strong tidal action with the constant taunting in the background. I know George did it in jest...but when I am locking into the hunt for a particular fish, I get into a species focused mode and it frustrated me to no end having someone trying to take my concentration away.

After losing that fish, I put on a new hook, walked over to George's rock and caught a Pacific Night Sergeant in less than 5 seconds. I honestly don't know what all that fuss was about :P 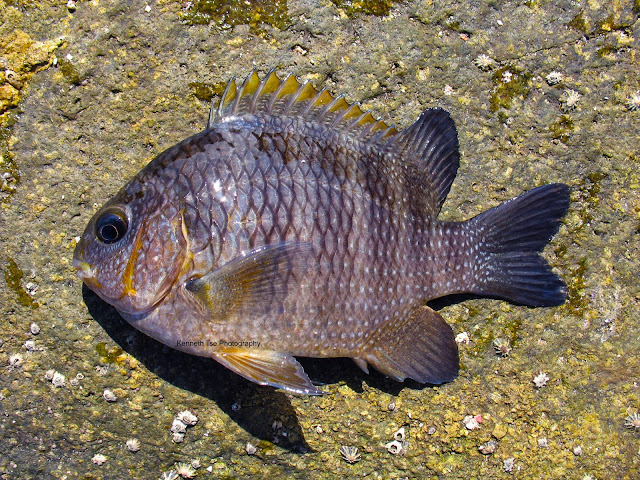 Of course, George would blindly catch a Banded Wrasse without any intention to catch one. George's vision isn't good enough to see through the tumbling water. He simply used a drop, wait and lift technique. It was frustrating to me that I tried to hard to identify and isolate a particular fish of a particular species to catch, to the truest sense and application of the term "species hunting", yet here was George fishing by pure luck only to catch a species I had spend half the morning searching and targeting.

I didn't want to leave the tidal pools. I was not about to leave without catching a Giant Damselfish. There were many juveniles in the area that I started to identify but the generic brown damselfishes, both Beaubrummel and Cortez Damselfish, kept beating the Giant Damselfish to the bait. As the tide rose higher and higher, the rough water became increasingly difficult to position the bait in the right location for the right fish. I didn't want to leave...but I can't miss my flight either. At the end, with everyone waiting on me, I reluctantly packed my gear away. This tide pool area had so much promise. In our mere 3 hours of fishing the location, we barely scratched the surface of its potential. If only I had known about this spot from the start of the trip, I would spend every afternoon at this tide pool while George and Jeff returned to the condo to nap. I have an eternity to rest when I'm dead. Now wasn't a time to rest.

I spent last night to pack my gear until 12am in the morning. While everyone packed their gear away, I sat twiddling my thumb away thinking...If only I had known about this spot from the start of the trip...

I guess I'll finish the trip here. The rest of the journey home was nothing special or difficult. Over the 7 days fishing in Mazatlan, I caught 33 new species. Together with the 17 new species caught in Florida prior to the trip, I caught a total of 50 new species in the month of April. That is pretty darn ridiculous even in the eyes of hardcore species hunters. This was the first taste of Mexico and I can only say it tasted bittersweet. Even with 33 lifers, I felt rather unaccomplished since there were many species that could have been, would have been or should have been caught. It sounds completely ungrateful...but it was truly how I felt. There were too many missed opportunities that I could not simply swallow or look past. However, the goodness that results from such outcome was a promise to return to the Sea of Cortez the next earliest availability possible. There were scores to settle...and I'm hell bent on revenge. When I finally resolve these issues and find my peace of mind, I'll definitely immortalize them on this blog.