The original plan for this day was to head offshore to look for billfish. However, we were not able to get an offshore charter arranged so we opted for a second day of species hunting on the bottom.

Arriving at the dock, I saw what appeared to be an Amarillo Snapper under the dock. This little Pacific Dog Snapper foiled my plan, but it did gave me a great lifelist picture for the album. 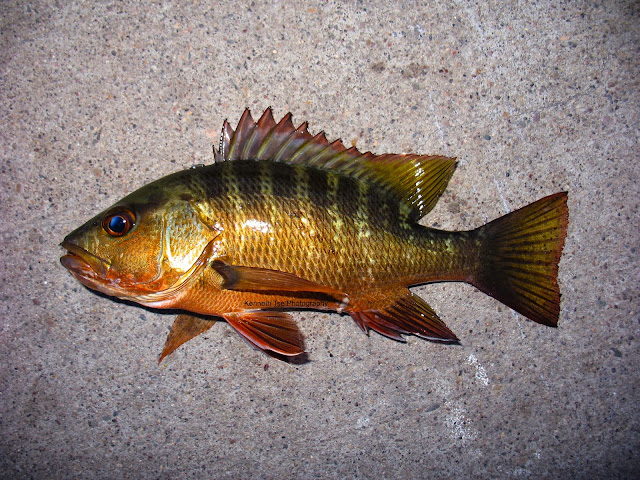 The boat was soon loaded and we watched as the morning sun broke through the clouds on the way out of the marina. After catching 16 species yesterday, what kind of species awaits the day? 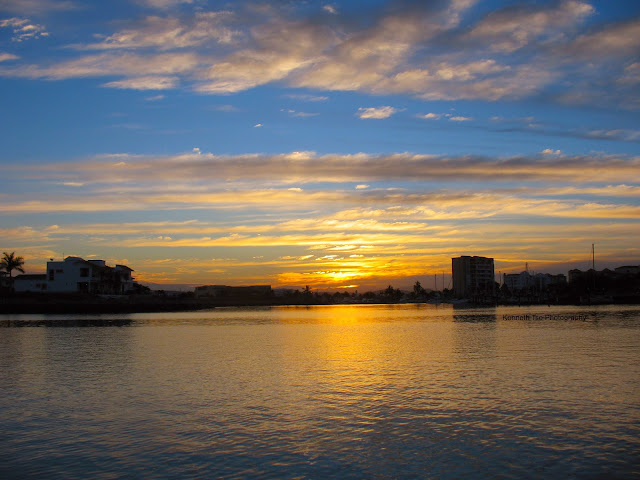 Loaded with live mullets again, Captain C suggested that we should try some wrecks for bigger species in the morning. Michael managed to get bit but lost his fish on the way up. Then George was wrecked by something large, possibly a big grouper. The bite was very slow so we moved in a little shallower to bottom fish.

Although today was calmer than yesterday, the bite was much slower. We picked at small Spotted Rose Snapper for a while until a school of bigger Finescale Triggerfish gathered under the boat. Although we caught some other species, none of them were new to me except for the Pacific Mutton Hamlet. Everyone had caught this species yesterday but I simply could not get one on the line. At least I was able to scratch this one off today. 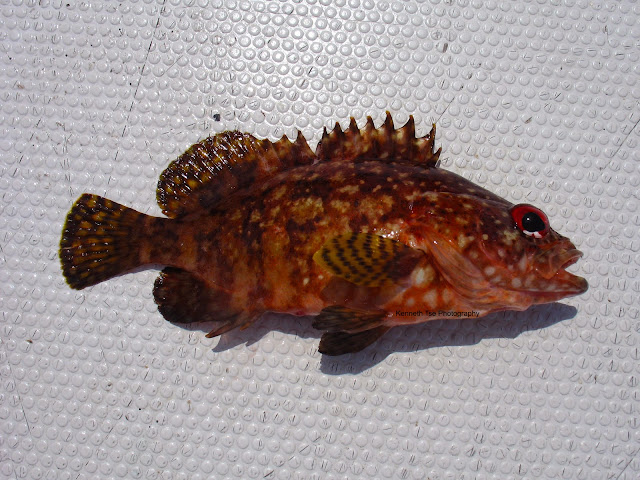 George and Jeff managed to catch 3 rare Banded Serrano between them. I was using a sabiki rig hoping to find one of my own when I hooked a Bullseye Pufferfish. Unfortunately, it was barely skin hooked on the lip and the skin broke through when I tried to lift it into the boat :(

There were also a couple of Orangeside Triggerfish landed and even a few Jewel Moray Eel. But the only new species I caught off the wrecks was the Pacific Mutton Hamlet.

On the way back to the marina, we found a large bird pile diving on bait. We started trolling live mullet around the area near the rocks hoping to find Roosterfish or big Pacific Crevalle Jack. I was looking toward the bait ball when a school of smaller Pacific Crevalle Jack came by. I immediately put on a X-Rap and Captain C positioned the boat within range of the bait school. On the first cast, a fish hit the X-Rap, missed and hit it again and I was on. However, the fish pulled so hard that it eventually bent out the rear treble hook and the fish came off.

I handed the rod to George while we set up a second rod with a 1/2oz Kastmaster. The X-Rap simply was too light to cast far enough toward the bait school. With the Kastmaster, I was able to reach the bait ball but the fish simply wanted the X-Rap. George hooked up on the X-Rap but that fish came off as well.

Soon, our boat activity scattered the bait and the predators dispersed.

Back at the dock, there were some small species that luckily salvaged the day for me. There were many Dow's Mojarra (aka Pacific Flagfin Mojarra) to be caught with little effort using a tanago hook. 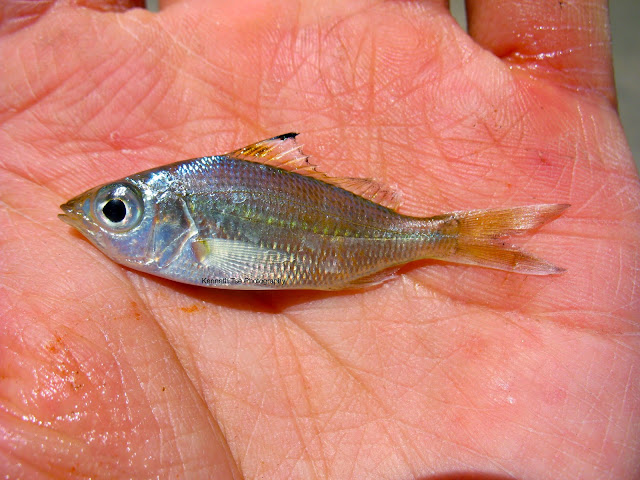 At the boat ramp, there were these small fish on bottom that resembled gobies. They were extremely wary to movement and noise. I tried to sit the bait close to a group of them but the mojarra relentlessly circled the bait. As I was moving the bait away from the mojarra along the bottom, I noticed that a couple of the "gobies" turned toward the bait. I started to hop the bait slowly on bottom in similar manner to darter fishing. One of the "gobies" finally lunged at the bait and I hooked up. A little bit of detective work revealed the fish to be a juvenile Pacific Sleeper. 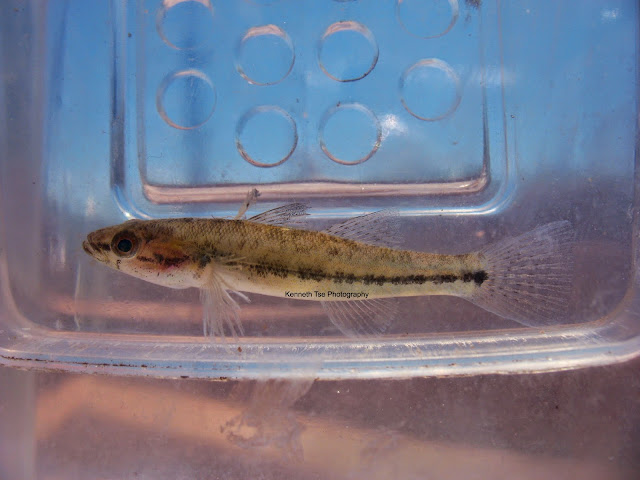 When we returned to the condo, George made a call to arrange our offshore day with a company he had used many times in the past. The outlook was not too favourable as the catch count was very low for the past few days. Offshore fishing is often a gamble even at the best of times, so Michael and I decided to play Russian Roulette with our $400 on the next day.

For dinner, George took us to Los Zarapes to cook up our catch of Striped Weakfish, Spotted Rose Snapper and Finescale Triggerfish. He knew the staff at the restaurant and they knew how to prepare a most appetizing platter of fish using our own catches. Before the platter arrived, we had some freshly prepared salas with tortilla. The salsa didn't last long...neither did the Pacifico. 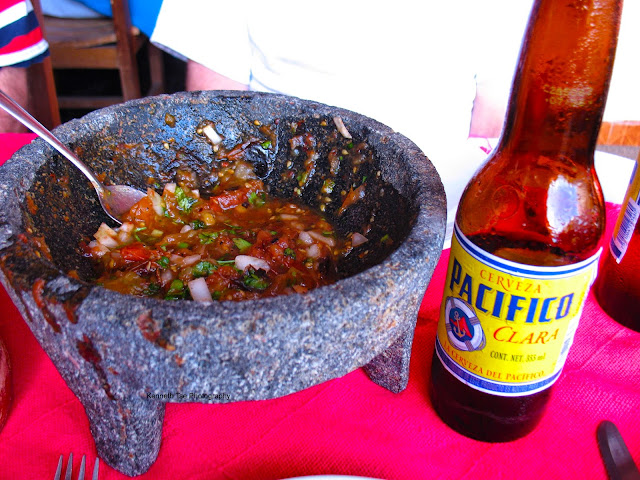 When the platter arrived George said there was usually so much food that the staff would wait for the leftover half, especially when there were Weakfish or Snook fillets prepared. The breaded Striped Weakfish fillets was probably the ABSOLUTE BEST breaded fish I've ever had! 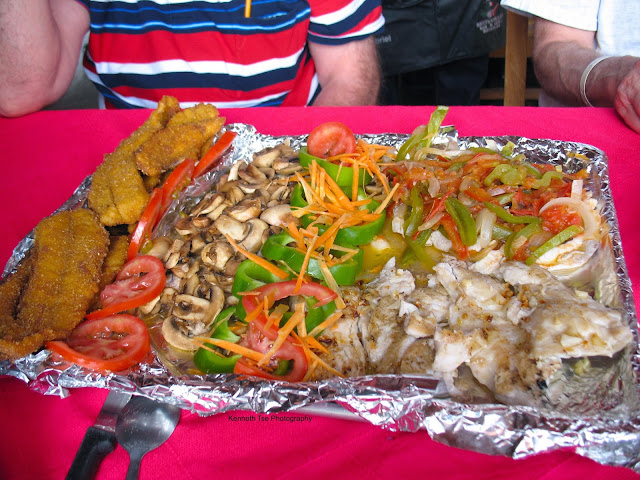 Unfortunately for the staff at the restaurant, I have a big appetite. There was no leftover this time. George and Jeff were done early, and eventually even Michael had enough. I kept eating until nothing was left. 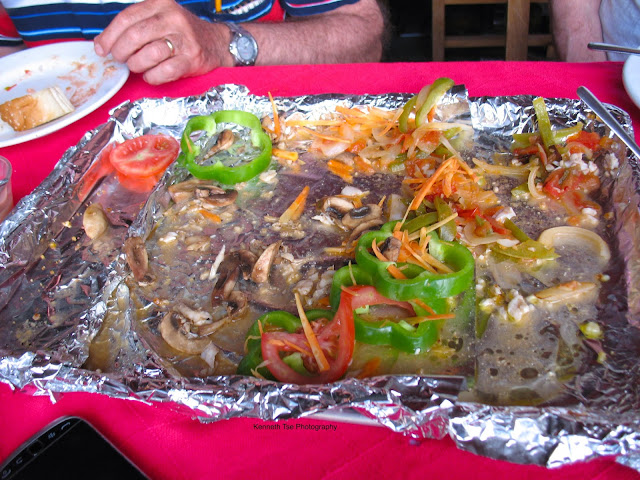 Species hunting today was remarkably slow, probably due to the fact that I had already caught 16 of the more common species of fish yesterday in one day. It was a bit of a heartbreak to lose two new species (Bullseye Puffer and Pacific Crevalle Jack), and since I had high expectation of myself, it was a tough pill to swallow. But at the end of the day, I reminded myself that we were here fishing for fun, and we were in Mexico, so let's just take it slow with some Pacifico and good food and simply enjoy the moment. Tomorrow is a new day and anything can happen...especially offshore.