As usual, the alarm sounds much too soon. Groggy and disoriented, I stumbled out of bed wondering what kind of obsession led me down this path of insanity. Oh right...I'm here not only to fish, but to catch some new species! My aunt thinks I'm completely irrational waking up so early to fish and I would admit it. I'm beyond the denial and sadness stage. Now I simply admit my addiction, but it doesn't mean I'm ready for change. Fishing is a lifestyle to me, not simply a hobby.

The 30 minute drive toward Fort Lauderdale felt extra long - it was one part anticipation and one part drowsiness. Finally, we packed up Mark's car at 5:15am and headed to promise land.

I have been trying to catch a Florida Pompano for a few years. In September 2009, I was in Savannah, Georgia for a conference and had the opportunity to fish Tybee Island for a couple of days. I was there just a week early for the pompano run. In April 2010, I was in Florida for another conference so I visited my uncle after the conference ended. The timing of the trip was perfect for the pompano run, but the weather conditions simply never cooperated as I had a few days of perfect calm wind. Pompano likes current and rough murky surf. On my 2012 trip to Florida, we were fishing in the winter so I didn't expect to catch any pompano at all. Surprisingly, during my 2013 trip, I saw pompano caught on two separate occasions in Tampa during the winter when pompano were not expected. I certain did try to catch them for a bit, but it was like a needle in a haystack.

Those who know me knows that I speak adamantly about hunting fish during the prime bite. As much as I admire efforts to find fish all year round, there is often no amount of resource and time I can justify to dedicate a foolhardy chase for a target that you knew will not appear in catchable numbers if we were fishing at the wrong time of year or under the wrong conditions. Life is short...why waste precious time and resource?

Coming back to this trip, we finally had many of the stars aligned. We were in Florida in April and there were reports of pompano caught recently off Anglin's pier. I had been watching the wind forecast for a while and saw favourable wind conditions for a few days. Expectations were flying high and it seemed we would hit the mother lode finally.

Well, the morning did not progress as expected. Speaking to the anglers on the pier, the pompano bite had been slow the past few days. Only a handful of small pompano had been caught. Although the bite had been slow, the rail was lined with people already and there wasn't much space to squeeze in between rods. If we want pompano, we had to wake up much earlier to get a spot.

Seeing as the bite was slow and we couldn't fit in, we decided to fish a lighted area by the pier. There were many silvery fish larger than palm size zooming in and out of the light. They look rather like Atlantic Moonfish. Indeed, a mere minutes after we set up, the person beside us caught an Atlantic Moonfish on his sabiki. Hopes were up and we fished the sabiki tirelessly...but we did not see anyone catch an Atlantic Moonfish again that morning, or throughout out entire trip for that matter. 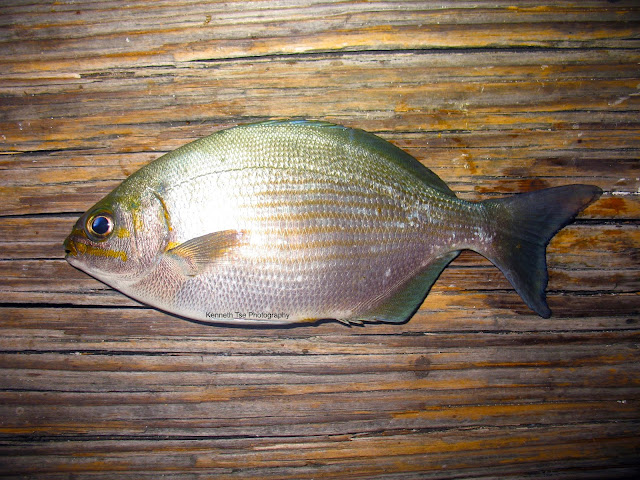 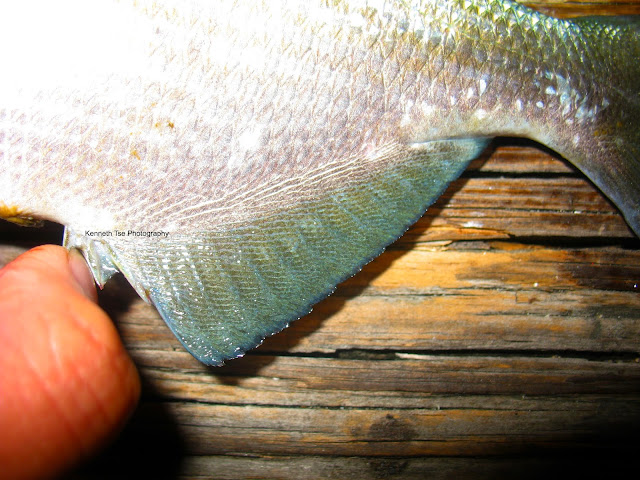 As the sun was rising, we heard a couple of pompano coming up the rail but we wouldn't even consider it as steady action. Seeing as the fish circling the light had left, I started casting under the pier to see if they had retreated below. The little reef fish were starting to wake up and I had my chunks of shrimp stolen a few times. With a bit of persistence, I finally felt a solid tap. I was hoping for a Moonfish but found a pleasant surprise! 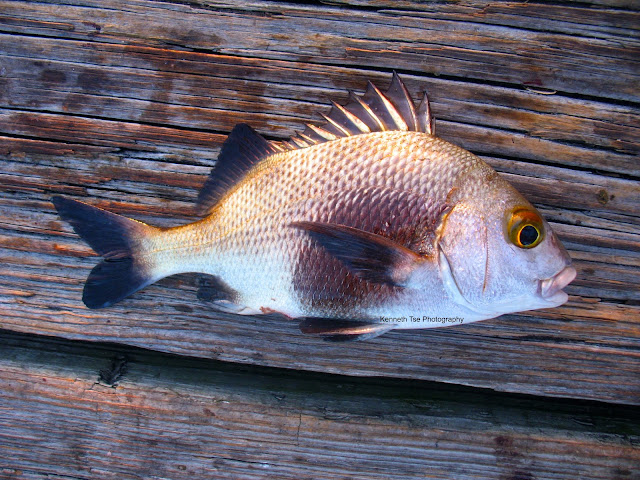 It was just a month ago when my friend Nick Li caught this species at Sebastian Inlet and he had me pawing for one of my own. I was happy to stumble upon this species by chance.

Another bait sent under the pier and I caught yet another Black Margate. Since these fish often travel in schools, I surrendered my spot to Mark and Michael so they can try to catch their own lifer as well. However, for some unexplained reason, neither of them were able to catch one. When they gave up, I returned to the spot and caught 3 other Black Margate. We were fishing the same way with the same rig and bait. It was unbelievable that I was the only one catching them.

Mark had his revenge though. While he was trying for a Black Margate, a French Angelfish found his hook and with a bit of drama at the net, we finally had the fish landed. I was very happy for Mark, and the the same time a bit envious LOL. That was a very, very cool catch...and one that not many people can claim.

With the sun climbing high up, I decided that it was silly to simply fish the sabiki one one rod when I brought 3 rods with me. I tied a high-low rig with 15lb mono and #6 hooks onto my 9' surf rod and tossed out a couple frozen shrimp a distance from the pier. I was hoping to find some larger reef fish, or perhaps even a wayward pompano.

A short while later, I actually had a decent hit on the surf rod. The stronger fighting fish had me dreaming of my first pompano. When the silvery side came to colour, it was missing the sickle-shaped fins. I had a porgy on my line but I didn't really know which species yet. Playing it safe, I called for the net. I had a suspicion that this was a Grass Porgy, a species that I had tried and tried to catch in the Keys unsuccessfully. These fish are usually associated with seagrass flats. However, this fish came from the broken reef bottom of Anglin's pier without any seagrass in sight! These fish typically have very distinct and dark checkerboard marking on the side, but since the fish came off a rocky/sandy bottom, it was very pale in comparison. You can barely visualize the distinct Y-shape marking at the base of the tail that is usually the easy identification characteristic of the Grass Porgy (usually, but not always). 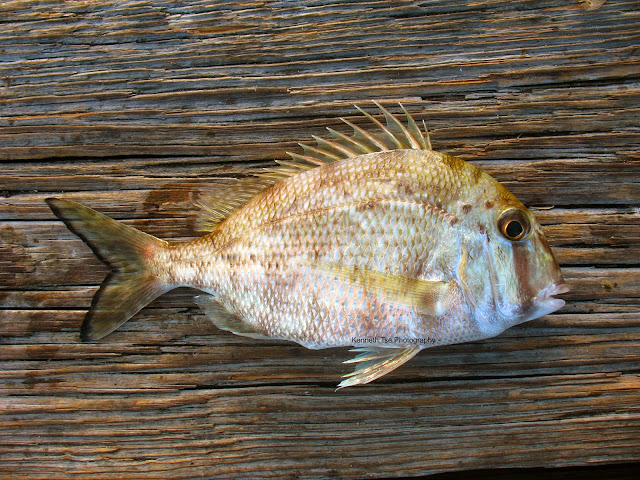 As more reef fish woke up, it became more and more difficult to fish a whole shrimp on the surf rod. The bait was stripped much too quickly by reef fish big and small. I focused on the sabiki rig again hoping for two of my targets here, the Smooth Trunkfish and the Orangespotted Filefish. After sorting through a number of Sergeant Major, Yellow Chub and Doctorfish, I finally found something different on the line. It was my Smooth Trunkfish! These guys are so cute! 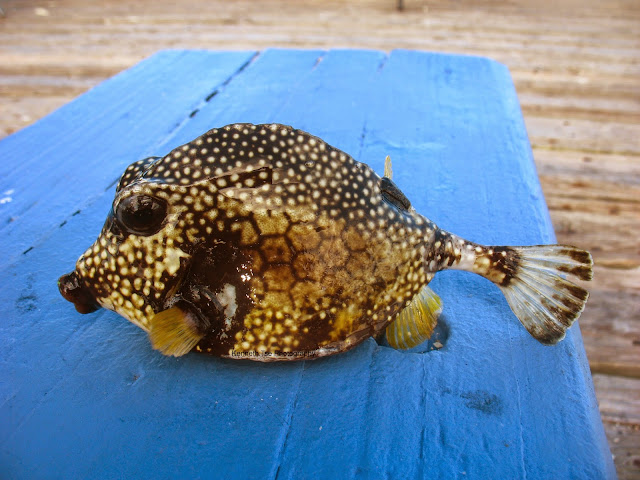 I would have loved to stay longer at the pier, but my aunt would like to have brunch at 11am. We called it a morning at 9am so I could grab a quick shower and change before lunch.

Michael and Mark fished a little bit on their own while I was having lunch. After lunch, I meet up with them at my Cobra Snakehead spot. On our last two trips, we found very difficult snakehead fishing in the winter. Since we were fishing during the spring now (and I had historically seen many snakeheads in the spring), I was confident that Michael could finally catch his snakehead this time.

Little did we know that something was off with the canal system in the area. The water was murky with a foul smell...a little like sewage actually. But I did see a snakehead cruising around on the far bank, so I encouraged Michael to keep faith and fish on. Throughout the afternoon, we fished and fished but received no bite. In fact, it took another couple of hours until I saw another snakehead after a lot of water covered. Toward the late afternoon, I finally spotted a snakehead really shallow that was setting up an ambush. I cast my rubber frog about 15 feet beyond the fish and worked the frog parallel to the grass just a couple of inches from dry ground. As the frog came with a foot of the fish, I saw the fish backing up almost like it was prepared in a strike position. Strangely, the fish suddenly sprung around and left. Did the fish see me (which I was about 20 feet away) when I swam backward from the shore? Did I do something wrong that signaled the fish to leave?

Not very far down the bank, I spotted another snakehead set up on ambush. I presented the frog the exact same way and yet again the fish refused the lure. Mark was following me around as I fish and from his experience these two fish were almost guaranteed for a strike. Something was off...something was preventing us from catching snakeheads and we couldn't figure out why.

Michael and I fished the area until around 5pm when we decided to move to another canal. We fished the new area thoroughly with Mark pitching a worm for exotic cichlids. At one point, I had a fish sucked my frog under and upon waiting for the hookset, the plastic frog came back with one leg ripped off. I think that was as close to a snakehead as we have got all day.

Tired and defeated, we decided to call it a day at sundown. I returned to my uncle's house while Michael and Mark drove back to Fort Lauderdale. We planned to wake up at 3:30am the next day to get a spot on the pier early in the morning.