It was difficult to get up at 5:00am. The excitement had kept me twisting and turning all night with only a couple hours of solid sleep. The vision of potential Roosterfish, Orangemouth Weakfish, Striped Marlin were there; and so were the dreams of Cortez Rainbow Wrasse, Spotted Rose Snapper, Orangeside Triggerfish and Giant Damselfish. I simply wanted to catch anything and everything. And that's a lot of expectation and anticipation.

We met Captain C and and our mate William at 6am. I promised George to keep the identity of our panga captain anonymous so please don't bother to ask. Not only do we get a truly great rate for his service, but Captain C had been fishing these waters for 50 years and he knew wrecks, reefs, seasons and techniques that many other captains tried to copy, follow and even steal unsuccessfully. Not only can Captain C put us on wrecks where we can catch numbers of fish, but he knew locations to find some more the more elusive species. We were truly at an envious position.

Captain C was the only panga captain who was willing to jump into the water to net mullet at 6am in the morning. With plenty of live mullet, we decided to give the Roosterfish a try, even when this was not Roosterfish season.

Trolling 3 live mullet behind the boat, we had just turned the corner out of the marina when I saw the comb of a Roosterfish waved excitedly behind my mullet. We were trolling the mullet by holding the rod in hand, bail opened, and the line gently resting on the finger to feel for a take. As soon as I felt the fish grabbed the mullet, I dropped the line back to allow the Roosterfish swallow the 8" mullet. After a count of 5, the bail was closed and the line reeled tight to set the circle hook...but all I felt was the mullet. As the moving boat pulled the mullet to the surface again, the Roosterfish came back and crashed the mullet again. I immediately opened the bait to drop the bait back, waited even longer this time and felt the fish on the line for a split second when I closed the bail. However, the mullet was dropped by the fish. Was that ever disappointing!

When I reeled in the mullet to put on a fresh one, there were scaled scrapped off the back and side. The Roosterfish had hit the fish broadside but the bite mark showed that the fish had simply held onto the bait and didn't swallow it.

We made a couple of passes without any other signs of Roosterfish in the area. It was then decided that we'll try one of the wrecks to bottom fish for some species.

Using 4oz weight and a bottom rig with 3/0 kahle hooks, we fished frozen shrimp and squid. In the fall, Captain C would purchase giant live shrimps for bait. However, since shrimp season was closed, there was no live shrimp available. Captain C ensured us that we would still catch fish on frozen shrimp.

On the first drop, I drew first blood. 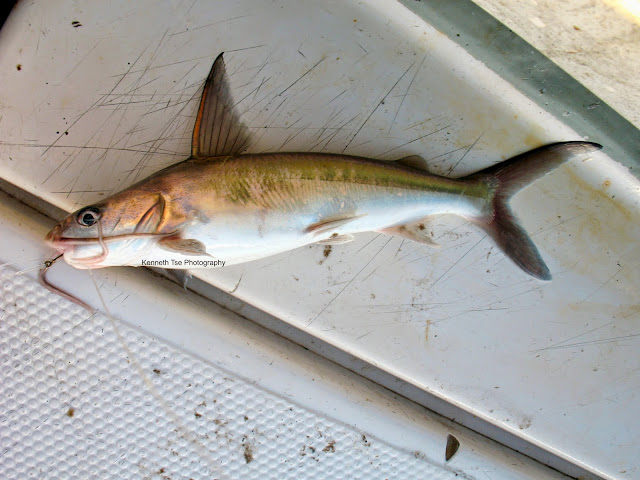 Everyone caught caught these catfish quickly. Then the grunts moved in. 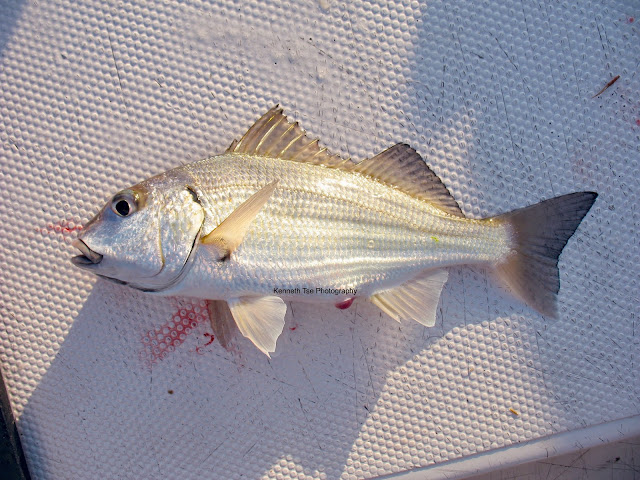 We started filling the fish hold with Raucous Grunts. Captain C is subsidence fisherman first and foremost and a guide second. We kept most of the sizable edible fish for Captain C. William was kept extremely busy baiting lines and taking off fish, especially the catfish that could deliver a poisonous jab with their sharp spines.

Among the Raucous Grunt was another species. 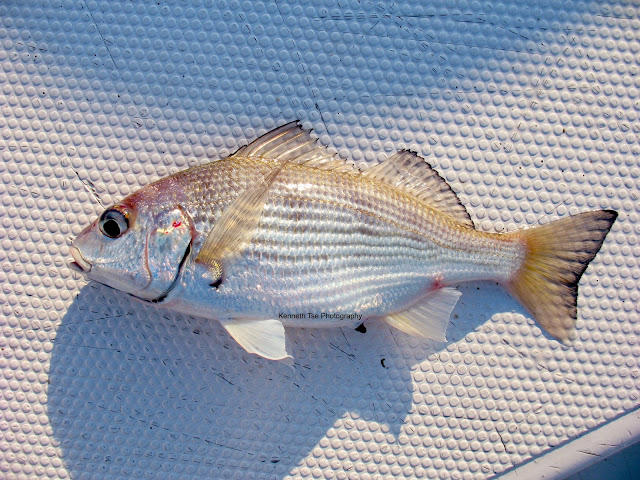 Then George caught a Striped Weakfish. This was a species that was only available in the spring. It was my goal to catch one. I was glad that it didn't take too long to find one. 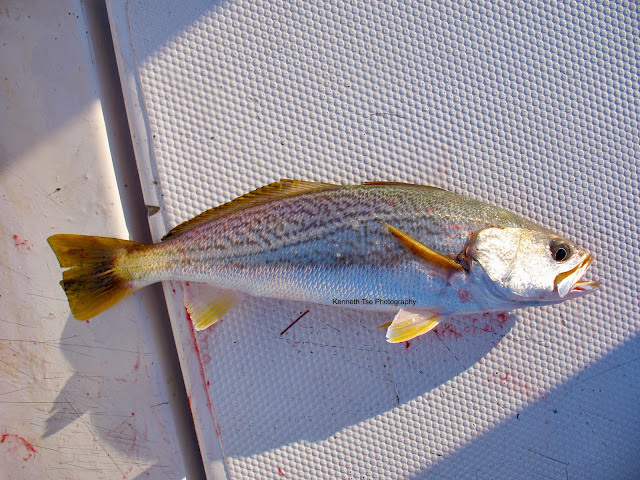 When we had enough grunts, Captain C decided to pull anchor to try another wreck.

At our next wreck, we fished live mullet on bottom. These wrecks may hold Orangemouth Weakfish, White Snook and a number of snapper species including Pacific Red Snapper Pacific Dog Snapper and Colorado Snapper.

On the first drop, my mullet was slammed by a decent fish (it has to be decent to take an 8" mullet!) but the circle hook did not set (I hate circle hooks!!!)

That was all the action so we decided to move to a reef to the north. Anything was possible on the reefs.

Using the same bottom rig, we were quick to find a lot of snappers. 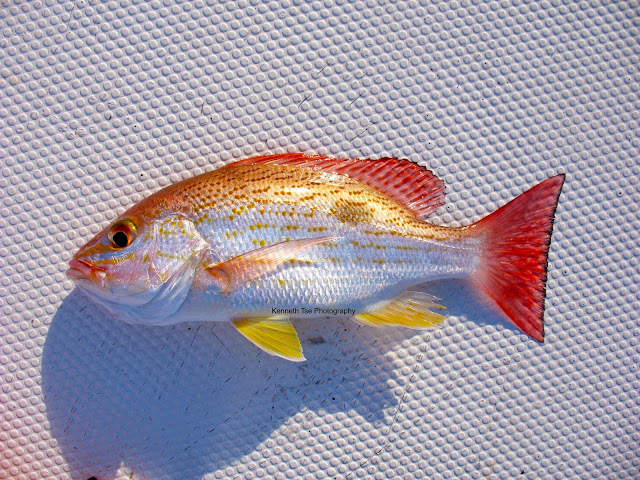 Captain C saw some suspended fish about 20 feet from bottom. We quickly discovered what they were. These Green Jack fought hard for their size...and pound for pound they were one of the hardest fighting fish I've encountered. 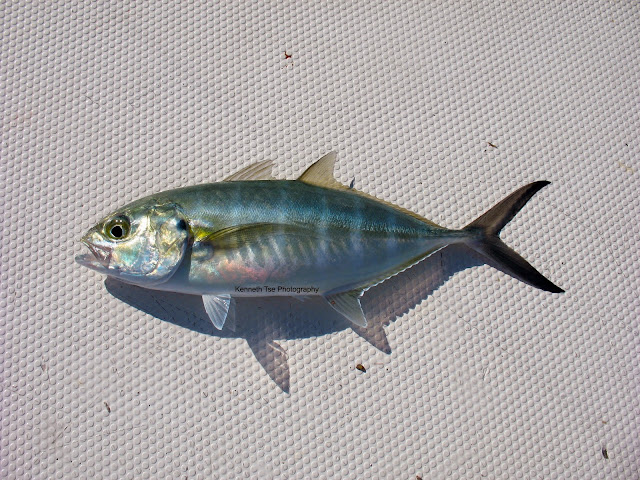 George, Jeff and Micahel started catching some smaller reef fish. I rigged my medium action spinning rod with a sabiki rig and started with one of the generic brown damselfish. For anyone who has caught a brown damselfish, it is not easy to identify the species since there are many similarly looking brown damselfish. The yellow pectoral fin and yellow tinged pelvic fins suggested that this was a Beaubrummel. 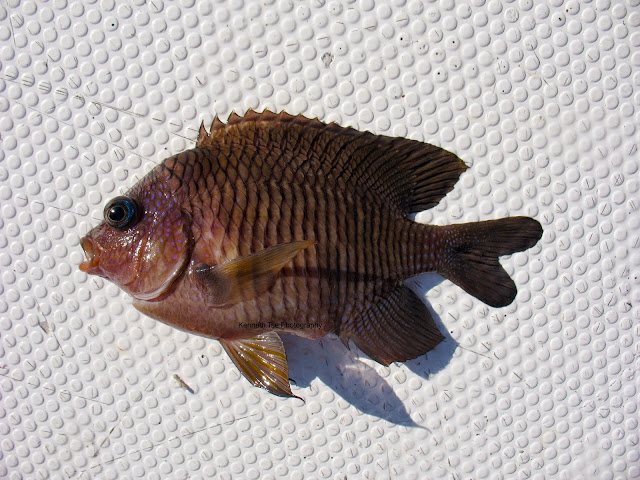 There were these small grouper species also. 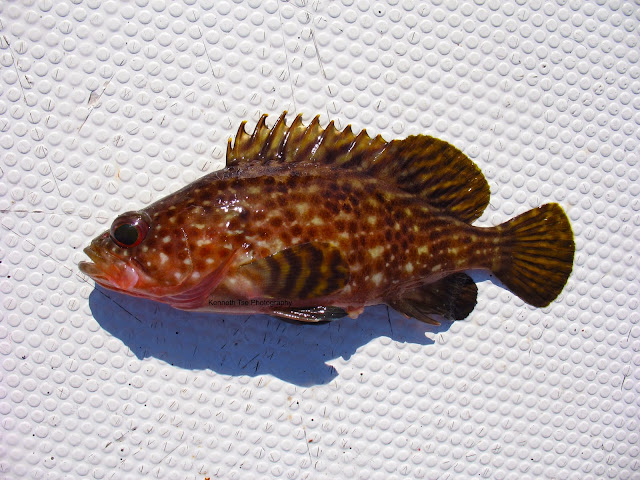 We often switch between the bottom rig and the sabiki depending on the size of fish we encountered. These Burrito Grunts warranted heavier lines and bigger hooks. 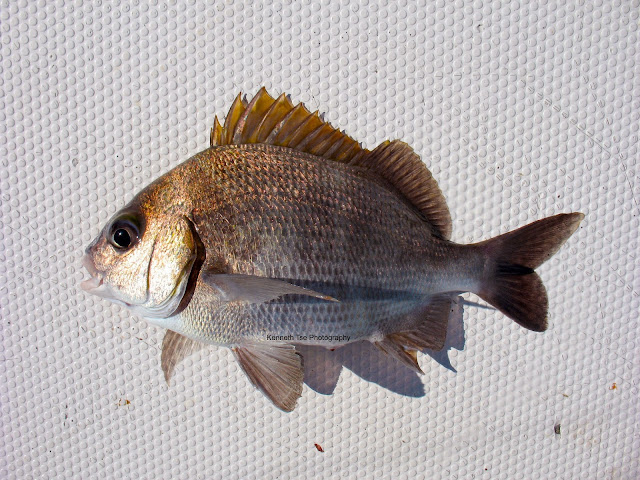 Everyone else caught the Starry Grouper (aka Flag Cabrilla) quickly, but it took me a while to catch one. 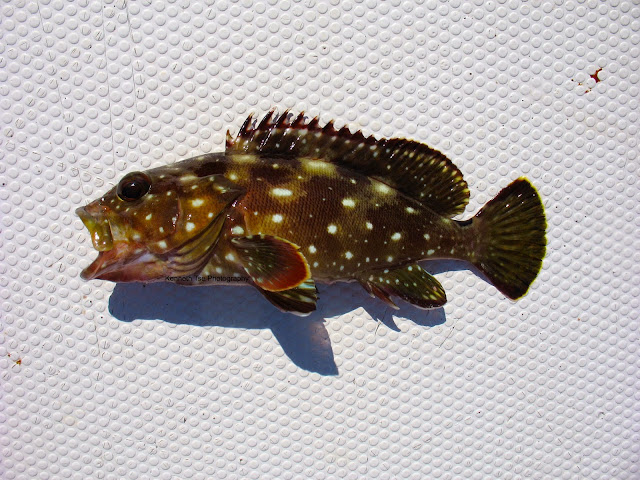 Occasionally, a sabiki rig, or even the heavier 30lb fluorocarbon on the bottom rig, would be cut off my a fish. I was lucky to land the culprit that kept cutting people off. This fish was likely attacked by its bigger sibling at some point. 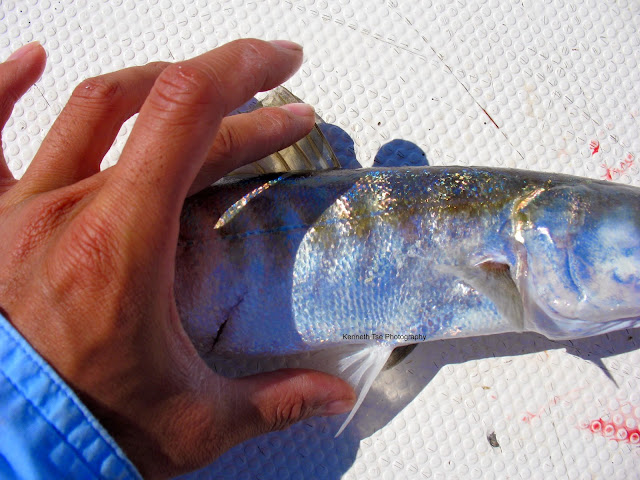 There were more grunt species landed. The Yellowspotted Grunt is also known as the Cortez Grunt. They fight surprisingly hard for a grunt species. 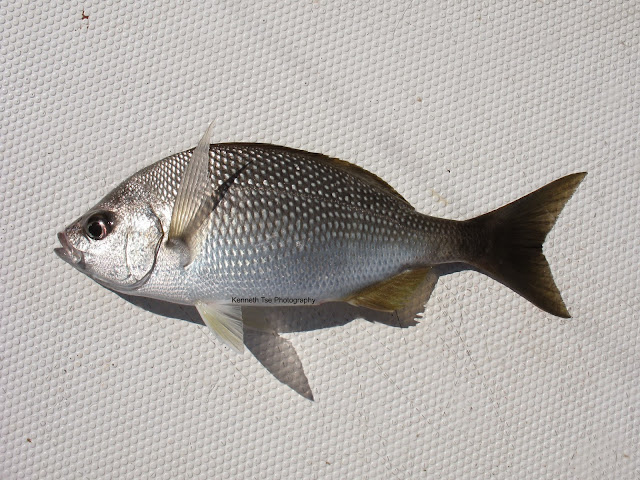 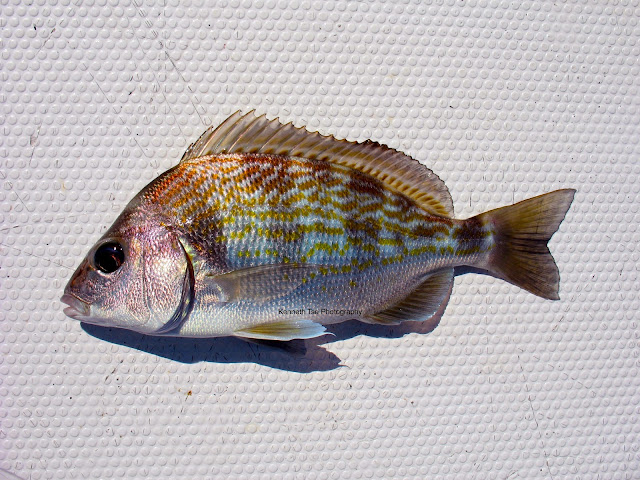 There were many Finescale Triggerfish caught by eveyone, but for some reason I could not catch one until just an hour before we had to leave. 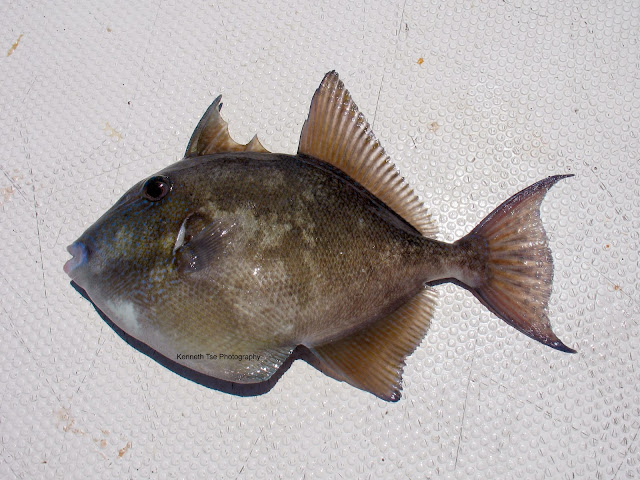 With a fish hold amply filled and our time winding down, we headed back toward port. On our way in, we stopped at another wreck to fish some live mullets again. This time, Michael had a hit and miss as well. But with only a single hit, we decided to wrap up the day.

At the dock there was a huge school of catfish that habituated to feed on the fish carcasses at the cleaning station. It took about 2 seconds after a piece of hooked bait to enter the water before it was gulped down. 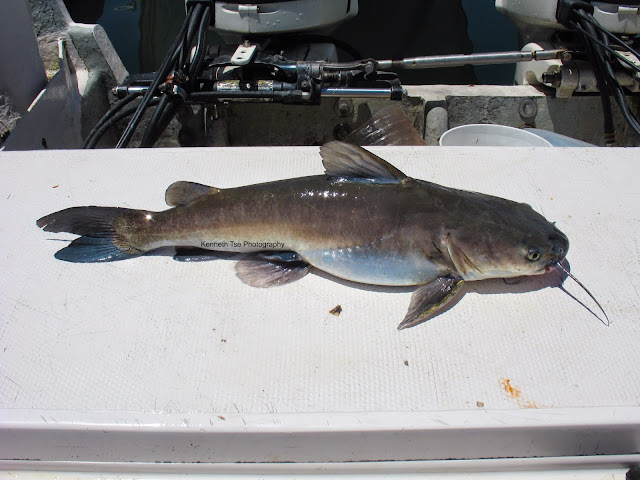 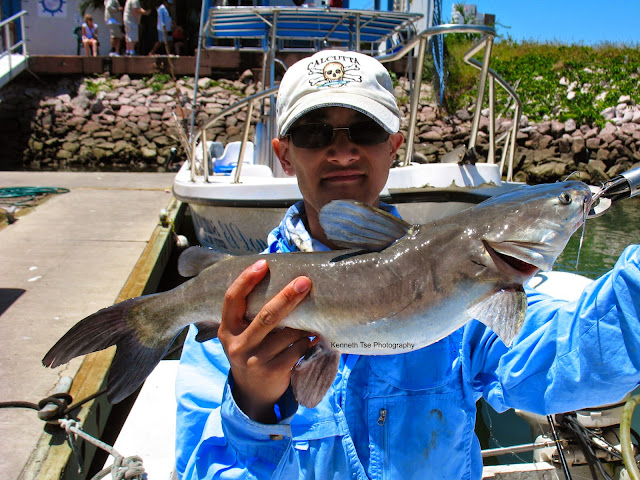 Around the dock, I noticed these small snappers hanging out. They were difficult to catch since they were extremely wary. But eventually I was able to get one to hit on a piece of shrimp freelined on 8lb fluorocarbon on a tiny hook. 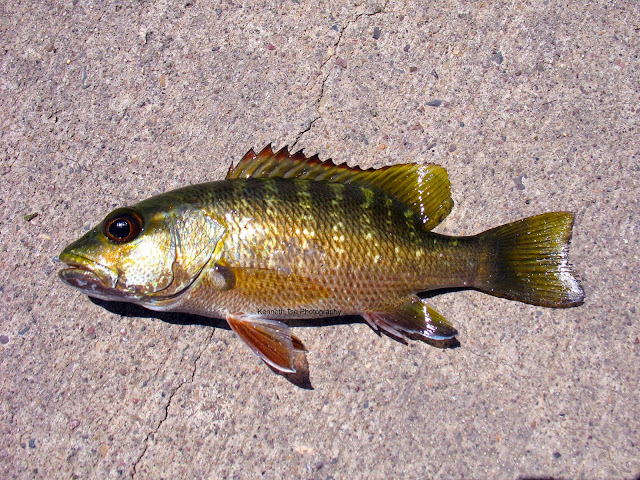 After fishing, we returned to the condo for a nap. The first day was especially exhausting due to the long travel the day before. When we woke up at 5pm, we went to Playa Bruja for some tortilla soup and a seafood platter that George highly recommended. It was definitely delicious! 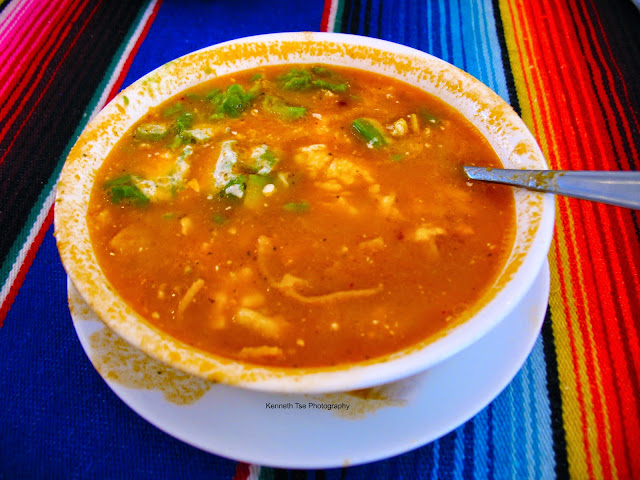 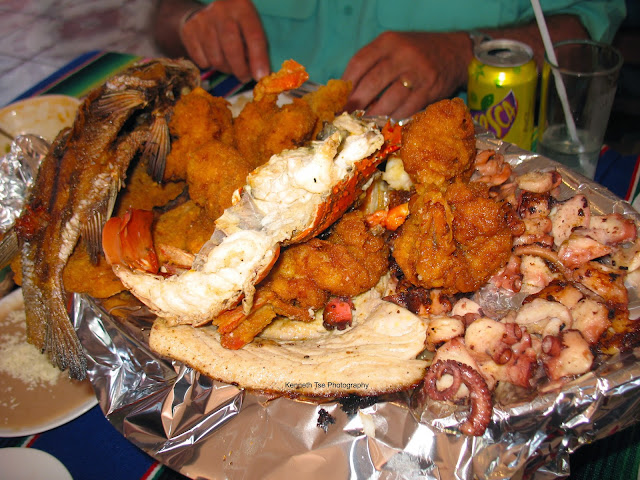 While we waited for our food, there was a band entertaining the patrons. It was Sunday and the place was lively. A little girl from one table bravely went on stage to sing a song. Although I didn't understand any Spanish, she was a pitch perfect little angel. 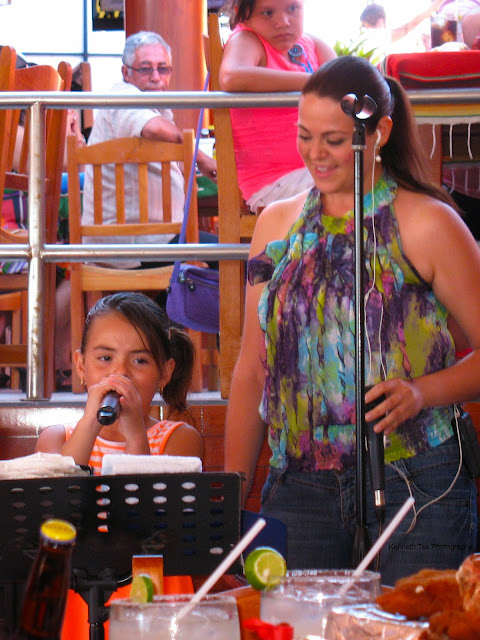 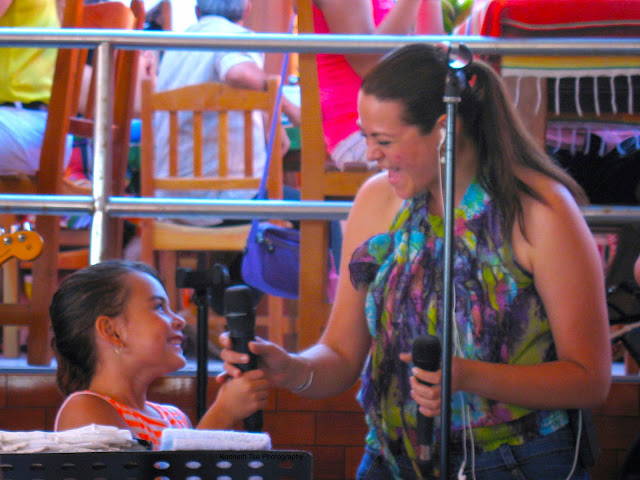 I finished the day with 16 new species!!! Although this would be my best species hunting day ever, there were still many species that others had caught that I simply couldn't. I shouldn't be greedy but I was worried about the chance I may encounter some of these species again in the next few days could be slim, especially the Roosterfish and whatever big fish that had taken the mullet on bottom.