This was our last day of boat fishing. Captain C made an extra effort to get live mullet knowing it was our last shot at Roosterfish. In fact, it took extra long for only a few live mullet. The school were simply scattered and bait was hard to get.

I was already fully rigged this morning knowing it would be my last chance. My bait was the first in the water and I had one of the liveliest mullet on the line. After we made one pass by the breakwater of the marina, we were just turning back toward the mouth when I saw the rooster comb behind my bait. I felt the grab and immediately freelined the bait bait. My heart was pounding as I counted to 5 before tightening the line and setting the octopus hook hard. The rod responded by folding into a "C". The fish was pulling back for a few seconds before the rod recoiled. SERIOUSLY!!! I reeled the bait back and it was completely swallowed. What happened??? I've set hooks into a tarpon before. I've set hooks into the hard skull of a whitefish with a #14 hook before. I've set hook against a big Samsonfish with 400+ feet of line out. What was wrong? I had made sure to sharpened the hook to a knife's edge the night before and it was sharp as a scalpel when I hooked the live mullet. I simply can't figure it out.

I dropped the bait back and in another 30 seconds later, another Roosterfish busted my mullet again and it was yet the same result. I simply can't win again these fish!

I wasn't alone. About another 5 minutes later, Michael had a Roosterfish grabbed his bait and the rod was bent to the butt but the fish came off as well. The fish gods simply didn't want us to land one!

With 3 bites within the first 30 minutes, Captain C decided to fish all the areas that could potentially hold Roosterfish. We circled the islands in front of Mazatlan. While we were fishing the live mullet, George cast a small strip of squid back in the spread and landed a Longjaw Leatherjacket and a Pacific Ladyfish, two potential lifer for me. In fact, just before George caught his Pacific Ladyfish, Michael and I both had something hit our lines. Captain C said they were ladyfish hitting our swivels. We asked Captain C to bring the boat back around so we can catch these ladyfish and he said we'll go back later...but we never did. I wasn't too happy about that to be honest. There was a lifer to be caught easily and we simply passed it by.

We covered a lot of very good looking Roosterfish areas. There were a lot of rocky bottom exposed to heavy surge. However, no one was home. It was neat seeing this sea cave though. 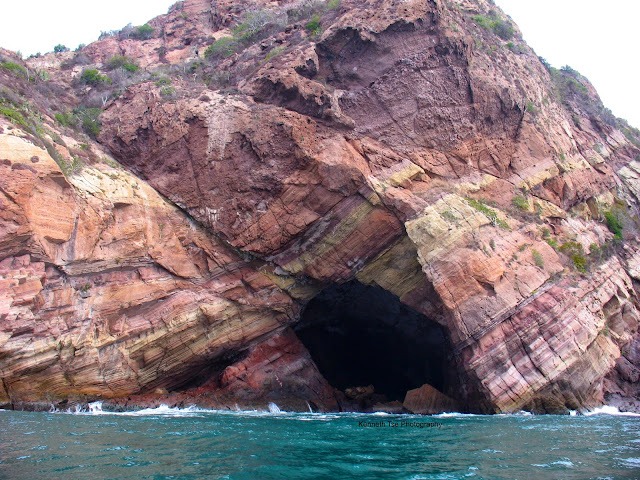 We spent about 3 hours trolling the entire shoreline in front of Mazatlan and beyond. At the end, we decided to bring the lines in to fish some wrecks that Captain C had known for 50 years.

There were a number of species caught, including more Jewel Moray Eel by everyone else...but I was completely plagued by Spotted Rose Snapper and Finescale Triggerfish. In order to catch a Jewel Moray Eel, the bait needed to sit close to bottom and it should be kept fairly still. But with the snapper and triggers constantly taking my bait, I couldn't let the bait sit there long enough. I was using the same bait as everyone, and my rig was set up just the same. I had absolutely no explanation why I was the only one not catching them. If I had a reason, I would have made the change and caught one...

While Michael caught a very cool Soapfish, and George caught two more new Grunt species, I was catching Panamic Sergeant Major in 50 feet of water where they were usually not found. Such was my luck... 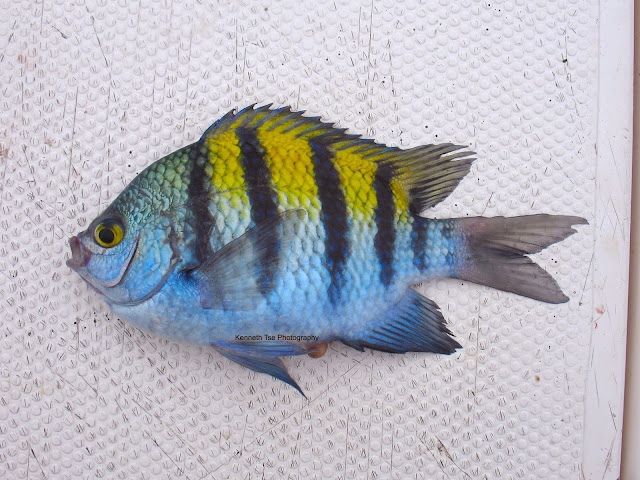 While sorting through all the Spotted Rose Snapper, I noticed a snapper that didn't really look the same. It was good I took some pictures and asked Captain C. It was a juvenile Pacific Red Snapper! At least I could finally catch something new... 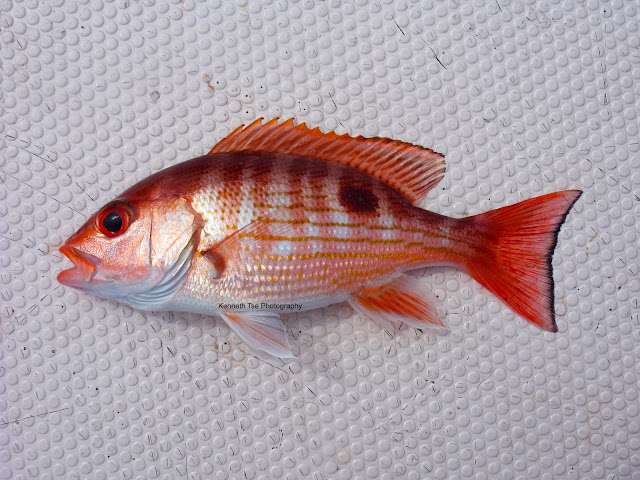 My frustration was very palpable on this day. In fact, I snapped a couple of times. People made all sorts of suggestions to do this and that and kept distracting my concentration on fishing. The last time George suggested for me to change rigs, I missed out on the Barred Pargo. I wasn't about to listen to anyone today. I was just fishing in the exact same way as everyone was fishing, only to see all kinds of new species caught around me.

If I sound sour and spiteful, I truly was. It doesn't feel good to missed two Roosterfish in the morning then see everyone else effortlessly catch lifers that you need. Most of them were rather random catches. As much as I like shamelessly adding lifers, it frustrate me to no end just how unpredictable lifer fishing can be. To be completely honest, I enjoy going to an area known for a few certain species and use specific techniques to catch those target species. Simply pulling up to a rig and dropping lines are not really my idea of fishing. Those who know me well knows just how much I love to break all the details to bits and analyze everything until the fish can be consistently caught with a certain technique at a certain spot during a certain time of year. This bottom fishing simply puts me into an uncomfortable mood.

Anyways...I needed to get that off my chest. After we fished those couple of wrecks, we fished a rock that jut out of the water over 60 feet of water where Michael caught the one and only Banded Grunt on this rock. This was a rare species that Captain C said he had caught on this rock in the past.

We made one more final move to a couple of wrecks to use up the live mullet. The first wreck was littered with Flathead Sea Catfish. We had to change location very quickly. 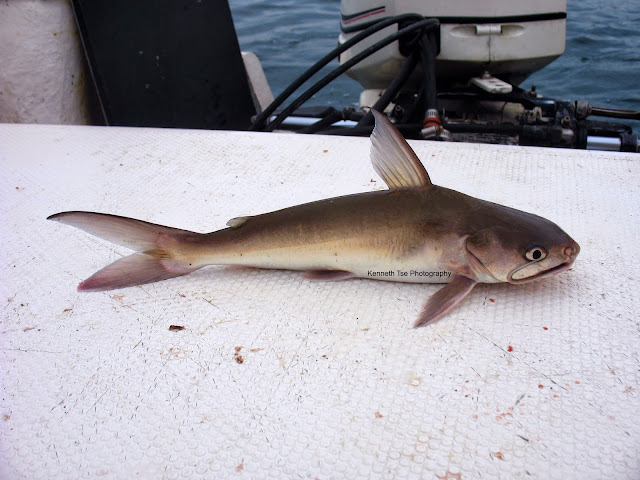 The second wreck had no one home so we motored back to the marina emptyhanded. I asked Captain C to make one last pass by the breakwater in front of the marina for a Roosterfish. We made two passes but it simply wasn't to be. The fish gods decided that I haven't pay enough dues yet and it wasn't my time.

Inside the marina, we trolled squid strips again and George caught one more Longjaw Laetherjacket while Michael caught a Shortjaw Leatherjacket.

And thus concluded our boat fishing adventures at Mazatlan. There were a lot of ups and downs for me personally. The first day was probably the most memorable day of lifer hunting in my life, followed by a series of really difficult attempts to simply add a new species each day. Some days I wish this lifelisting obsession hasn't taken such deep roots. For other people, it would simply be fun to go out and catch some fish. For me, having spent so much time and resource to fish Mexico, it was more than just fun. I invested heavily into the trip and I was expecting much more of myself. Although catching new species on bottom rigs are more or less a random thing, I refuse to believe that. There is always a reason why some anglers catches a particular species with greater frequency than others. There are always details that were missed out. I simply haven't figured it out yet. I am complete deviant against this concept of "stupid dumb luck"...which is why people often see my frustrated when fish are caught by such "stupid dumb luck" and people explained they are doing better by "stupid dumb luck". It is a lazy way out to a fishing issue.

Even so, I am happy to have spent 6 full days boat fishing in Mexico. That is something that I truly will not regret. However, I will return in the future to catch some of the species that had taunted me throughout the week, and I will not rest until I have these species conquered. MARK MY WORDS!