We decided for a chance of scenery after fishing Anglin's for two days. Pat had spoken highly of the Boca Raton and it was time to finally try out the area.

Before we started at Boca, we wanted to check out two little spots around the Fort Lauderdale area for some micros. One spot yields Mangrove Gambusia and Hardhead Silversides, the other spot yields Sheepshead Minnow, Inland Silverside and Goldspotted Killifish.

At our first location, we found quite a few Mangrove Gambusia. It took a bit of positioning to get at these fish since the boardwalk were surrounded by mangrove. It was a bit tricky to fish the tenkara rod among the mangrove branches. But eventually, all of us added the Mangrove Gambusia to our list. 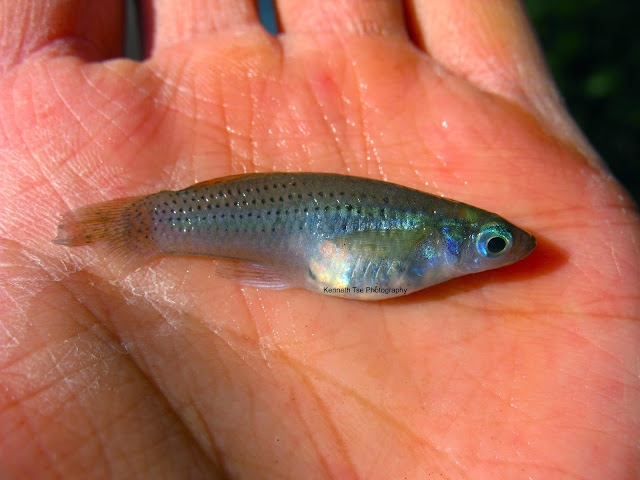 We tried and tried to tempt the schools of Hardhead Silverside in the area to bite but they just wouldn't have it. At one point, I felt two little hits but couldn't set the hook fast enough. After trying for an hour, we decided to save our time for other opportunities.

A short move later we arrived at a brackish pond. Following George's instruction, we cast our bait just a little past the shallow area and checked for a fish on the line every 10-15 seconds. These fish are so small that you can't feel their bites on a rig that was cast out. After a few tries, I was just retrieving my line when there was a little fish on the end. It was pretty unceremoniously landed, but I finally added the Sheepshead Minnow to my list! I had been waiting for another chance to catch these after seeing schools of unwilling Sheepshead Minnow in Maryland. 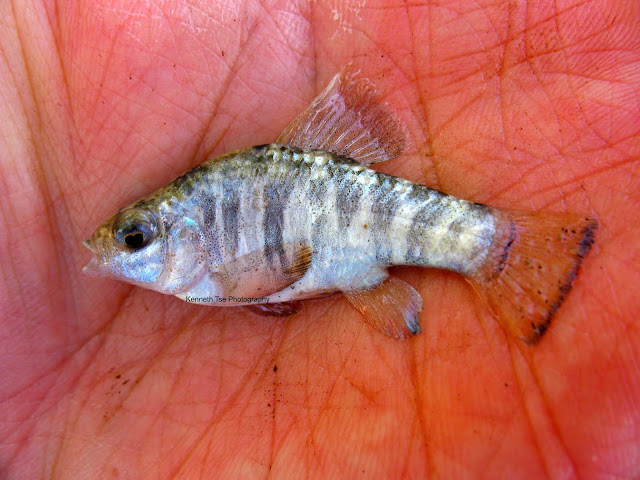 Again, we tried for the Inland Silverside and the Goldspotted Killifish for 30 minutes before leaving. The other little micros simply didn't seem to be around.

It was rather difficult to fish specifically for our targets since there was MILLIONS of Tomtate Grunt, Slippery Dick and Sergeant Major in the area in that specific order. I sorted through dozens of those fish before finally getting a Blackear Wrasse. They look so much alike to a Slippery Dick that I wonder how often do people misidentify them. 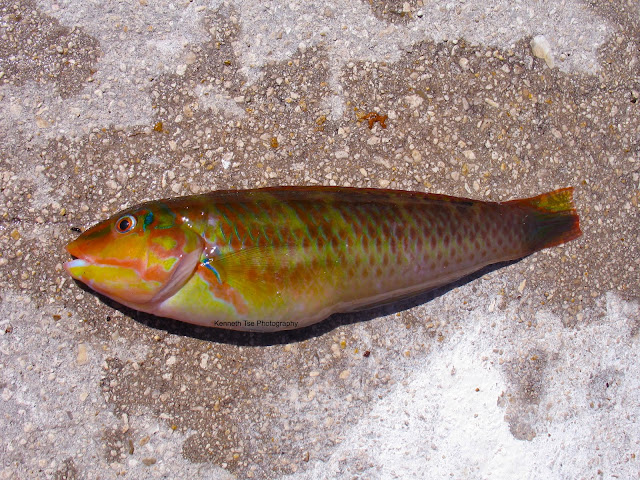 Fishing all afternoon around that location, we simply could not find any Orange Spotted Filefish or Princess Parrotfish. By late afternoon, I moved over closer to the bridge where there was calmer water and some wooden post to serve as cover. My first cast into the wooden post resulted in a good hit that cut me off in the post. A few more baits later, I finally landed a Redtail Parrotfish. Thinking there might be other parrotfish fish hanging out in the area, I fished the posts a little longer and found another Redtail Parrotfish.

I called Mark over to try for his first parrotfish species, but after spending a good hour trying, Mark ran out of bait. Meanwhile, Michael found some parrotfish by the boat launch but the masses of Sergeant Major and Tomtate Grunt prevents us from even presenting the bait to the parrotfish. After a whole afternoon of less than exciting fishing due to all the bait thieves and non-target catches, we pretty much had it. By 5pm, we were completely out of bait and that was the end of our time at Boca Raton.

I had to return the rental car by 8:30pm and then pick up my new rental car for the next two days. It's a bit of a strange arrangement because my first rental car was paid with some AirMiles Reward points and I had just enough points for only 3 days of rental.

On our way back, we discussed the possibility of fishing a marina dock near Dania Beach for Lookdown at night. While getting bait earlier in the day, we were told Lookdown are always in the lights at the dock and they were easy to catch. We had planned to try the dock at night after I picked up the rental car. I met with Mark and Michael at the bait shop in my new rental, but the news was not good since one of the young guy at the shop told us the dock is not patrolled by security and they no longer permit anglers to fish the dock at night. We decided to try anyways to see if we could convince the security to let us fish. But as advised, we were turned back.

With no backup plan, we decided to end the evening early so we can put in a good effort on Florida Pompano next morning.