Today love smiled on me
It took away my pain say please
Aw, let your ride be free
You gotta let it be, oh yeah

Some people may wake up with anticipation going on their offshore trip. I'm rather nonchalant about the whole deal. Perhaps I just have bad luck offshore. I can count with one hand the number of times we actually caught something, anything, going offshore...but I've been offshore more times than I could count with my fingers, thumbs and toes. The reality is that offshore is always a gamble, especially when you go offshore when it isn't the prime season. At the moment, the offshore bite was transitioning from Striped Marlin to Sailfish, Dolphinfish and Tuna. If you get lucky, you may get a shot at both a Marlin and a Sailfish in the same week. Otherwise, you may hit a big fat zero for days.

The mate and I focused on rigging up lures and bait. Unlike other areas where I have fished, mullets were the primary baits rigged on the trolling skirts. A couple of the mullets were butterflied to give the presentation a bit more action and to deliver a better scent trail. These mullet baited skirts were sent long on the outriggers and one that was a little shorter in the middle. On the corner, Michael and I trolled smaller skirts and lures just a little longer than the center line.

On the way out, we passed by a few homemade fish aggregating device and pulled some smaller lures around the area. No one was around these FADs. This was usually where Black Skipjack could be found.

We headed out 20 miles for some deep blue water. When we were just a couple of miles from location, I saw a few circling and diving birds and pointed it out to the captain. We made a couple of circles around the area but nothing transpired. We continued at trolling speed toward the preset location when the captain suddenly gunned the boat before making two wide donuts in the area. The mate had spotted a small Dolphinfish. However, the fish didn’t want to comply.

That was basically the pattern of the morning. Here and there, the mate would spot the odd fish and the captain would troll the lures around the area without a bite. Could we have done better if live baits were freelined to the fish? Perhaps. But we didn’t have any live mullet or sardines.

Toward late morning, we came upon an area with multiple pods of porpoises. There were a mix of spotted and spinner dolphins. Although some of these pods appeared to be hunting, there was no tuna associated with them. There were also a lot of turtles sunning on the surface with birds sitting on them. That is never a good sign as the resting bird indicated there was no bait being pushed in the area. In fact, the deep blue appeared too sterile.

Still, we kept an eye out for any debris that perhaps may hold a school of Dolphinfish. I was also trying to spot the dorsal and tail fin of any billfish that may be on the surface. I’m always fully engaged with rigging, setting the pattern and spotting fish when fishing offshore. It is never a hook-and-hand-off type of fishing for me.

With about 2 hours left to the day, we pointed the boat toward port. Still traveling at trolling speed, we covered all the areas with the trolling spread. When we hit green water less than 10 miles from shore, we started to find the FADs again. The captain planned a path to troll pass as many FADs as possible.

When we first arrived on the boat, we mentioned to the mate and the captain that we would like to stop on any debris or FADs if there were small fish holding under these objects. There would be any number of juveniles of pelagic species, or bait species, or oceanic triggerfishes that we could target using chunks of shrimp on lighter rods. As we trolled by these FADs, all of them had no fish associated with them.

Just a few miles from shore, we were close to yet another FAD when Michael and I spotted a marlin jumped clear out of the water. The captain immediately gunned the boat and trolled our spread a few times around the area. I was shaking with anticipation that I could finally hook up with a billfish. Ever since I saw a boat fought an estimated 500lb Blue Marlin in Hawaii, billfishes were always on my target list. This marlin appeared to be a 75lb Striped Marlin and it would just be the perfect size for lighter gear. Unfortunately, the fish simple sank out.

The captain and mate felt pretty bad that we didn’t hook up the entire morning. Just before we returned to the marina, we stopped at an FAD and bottom fished for a bit. There were a lot of Green Jack caught on the sabiki rig, but that was the limit of diversity in the area. I seriously wonder how the day might have changed if we had fished for some Green Jack first thing in the morning to use as live bait. I guess we would never know…

After returning to dock, we meet up with George and Jeff. George had a prearranged agreement with Billy, the owner of the fleet, for us to fish the dock. There could be a number of reef species available. In fact, these were the species that eventually salvaged the day for us.

I was rigged with 2lb mono and a #26 hook on the tenkara rod. It took almost no time to fling up a Beaubrummel. 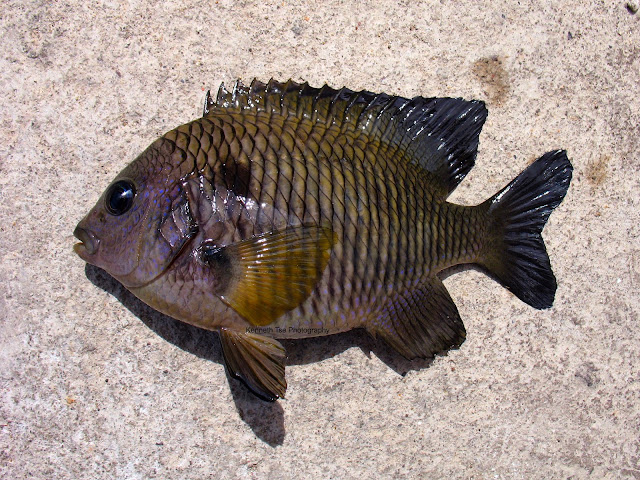 But the dock was a bit high off the water. Eventually, I rigged up a spinning rod to be able to fish on bottom. George and Michael kept getting tiny soft bites around a piling. When I put my rig in the area, I found out what it was. George had been trying to catch a Largemouth Blenny…and I admit I did steal this one from him. 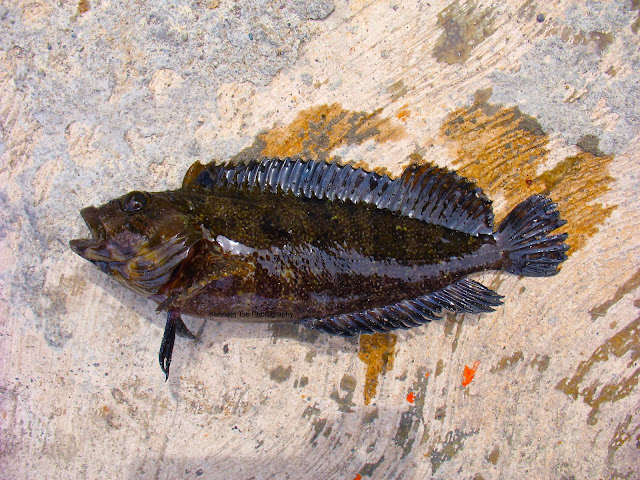 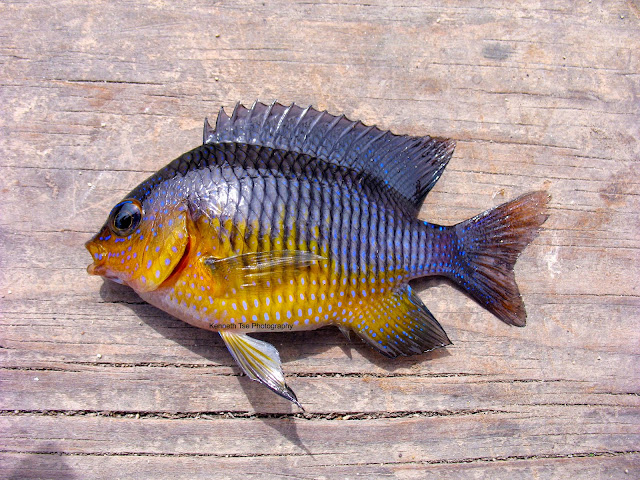 Their colouration can be so varied as juvenile. Here's a similar size Beaubrummel that was almost full brown. 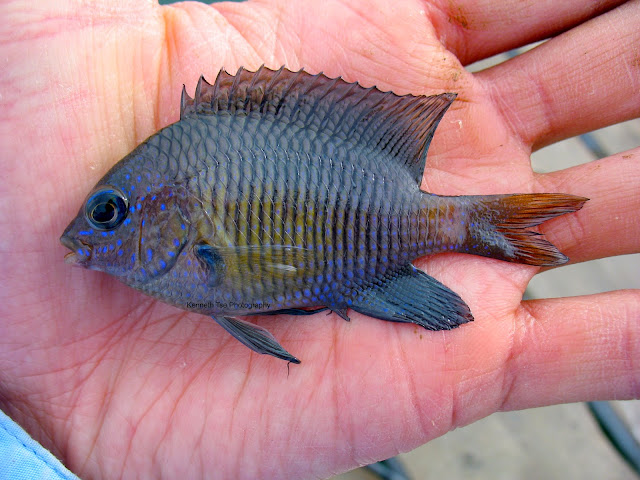 Everyone had caught a few Cameleon Wrasse. I was fearing I would miss out on the species until a slight adjustment of the rig and a small move to a new location gave me a few of them. This was one of the more beautiful specimens. 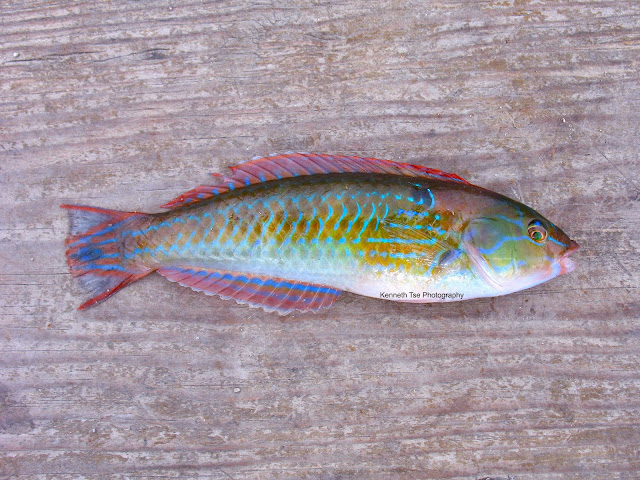 Michael had a Panamic Sergeant Major come off the hook. There doesn’t seem to be too many of them in the area. In fact, it may just be the single one. It took a lot of patience to sort through dozens of Beaubrummel before I finally caught it! 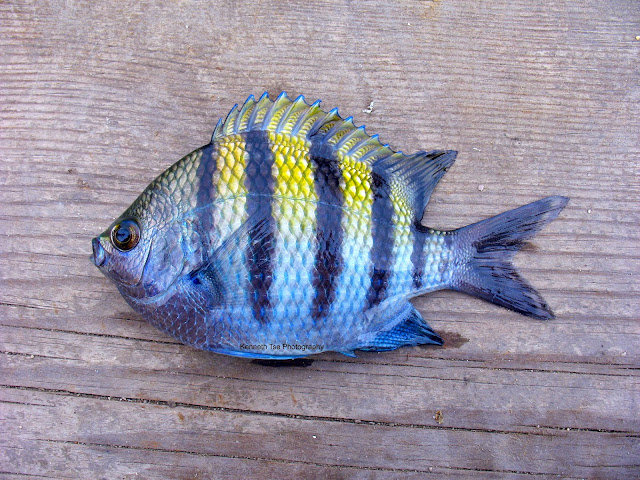 I spotted a small pufferfish around some seaweed on a rock. It was probably only 2” in size. Switching to a tanago hook, I let the bait wash in the area. The pufferfish quickly responded but I had to wait until the bait completely disappeared in its mouth. I thought the hook was well swallowed before I pull up to set, but alas the hook came out. Perhaps the hook point was in contact with the pufferfish’s teeth. It appeared to be a species of Sharpnose Puffer.

I also saw a larger pufferfish species, but it would not even touch my bait.

By 5pm, it was time to leave. I was glad to have added 3 new species at the dock. Going lifer-less on a day in Mexico is completely unacceptable! LOL.

After a shower, we headed out to a restaurant for BBQ ribs. For about $7, we got a salad, a full rack of pork ribs with coleslaw, baked potato and a slice of toast. That was bloody fantastic!!! 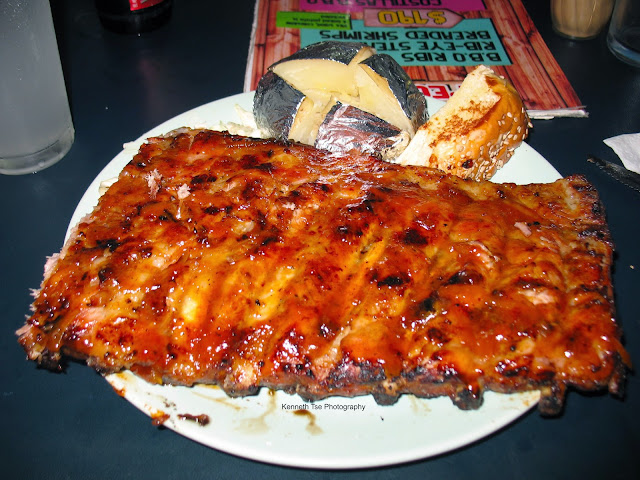 The more I fish offshore, the less I stress about the boat ride. It's going to happen; and it definitely will happen. One of these days, it will happen - I will catch my billfish. But until then, I'm just going to release my expectation and my anticipation to simply enjoy the ride for what it is.