This was our final morning in Florida. A sadness started to creep into me. Just as quickly as this trip had started, our time in Florida is coming to an end. Before we leave, there were still a few species I wanted to located at Anglin's pier.

We wanted to get some sand fleas again for bait. The bait store close to the pier was not opened until 8am, so we settled for frozen shrimp for the meantime.

Lacking sand fleas wasn't much of an issue this morning since the pompano were few and far between. Starting with the lighted area again, I landed two Atlantic Bumper in quick succession. Mark emulated my rig exactly and while he didn't catch an Atlantic Bumper, something else picked up his piece of shrimp and gave him a battle to remember. Alas, the fish ran under the pier. In an attempt to pull the fish back, the hook was pulled out.

Mark couldn't get the Atlantic Bumper biting so I gave him my rod. Perhaps my mono line allowed the piece of shrimp to hang just below the surface a bit better. Using my rod, Mark finally caught his Atlantic Bumper!

I broke off from Mark and Michael to search for my Lookdown and Moonfish. While I was walking the length of the pier fishing with a white crappie jig, I found a school of silversides holding near the surf zone. I dropped the jig among the baitfish and started jigging it vertically. After a few jig, I felt the line tightened and set the hook into a strong fish. The fish tried to run under the pier and I had to pull it out 3 times. Finally, I saw a silvery diamond in the water with the characteristic long sickle fins. Could this be? YES IT WAS!!! 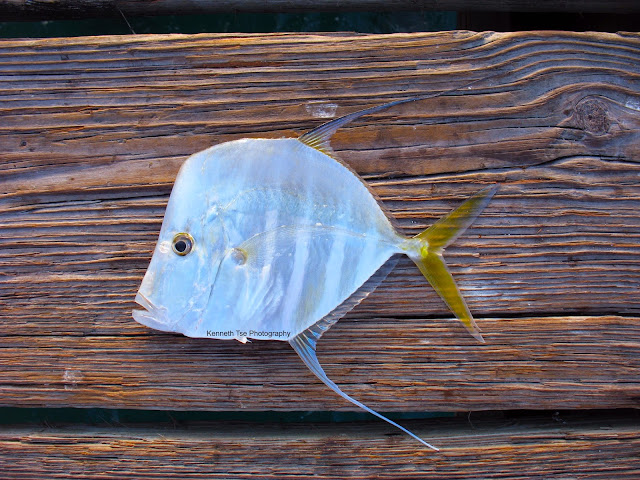 It wasn't a small one either. 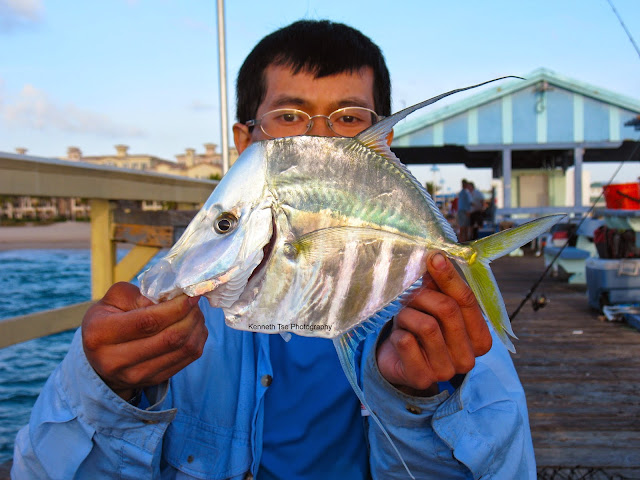 I tried to fish around the pier some more without finding another Lookdown or Moonfish. Eventually, the sun was high enough that it was time to fish the reef again.

As is was in the past few days, the sabiki were simply swarmed by Sergeant Major and Sea Chubs. I tried fishing it for 2 hours without adding any new species. Eventually, I decided to fish for the parrotfish again.

Mark had been trying for the Rainbow Parrotfish since 8am and lost a number of them. He had fish bitten off the hook, pulled off the hook and wrapped up in the pylon. I gave him some heavier line and both of us hung over the rail watching parrotfish react to our bait.

Michael had also been fishing for them and lost a couple. After I started fishing, it didn't take long before I had one in hand. 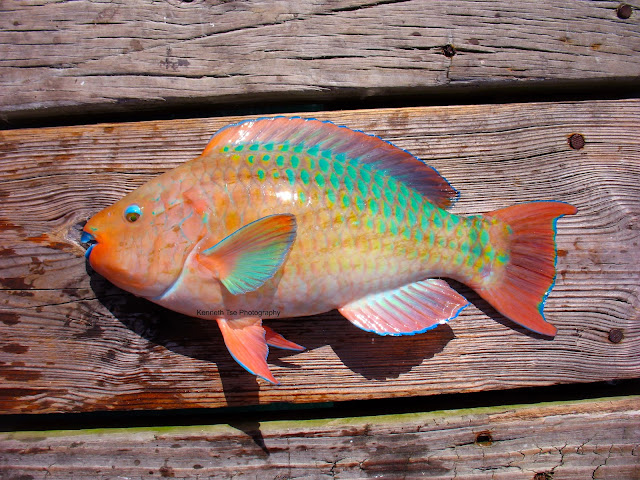 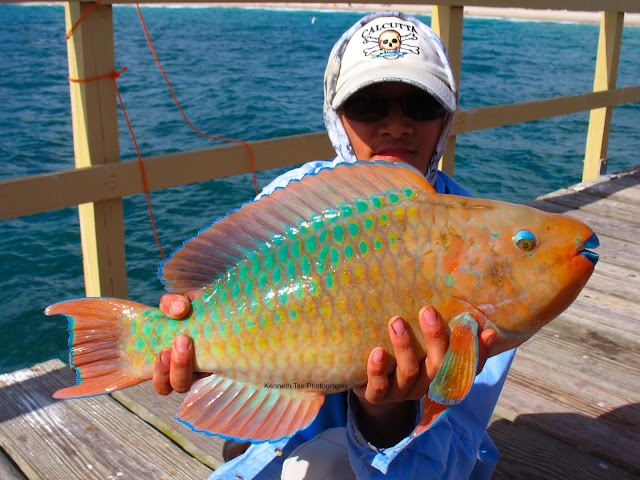 They were such a stunning fish. Our technique was so deadly against these parrotfish that I simply can't expose it publicly on the internet...

I fished some more but didn't catch any other species of parrotfish. At one point, a French Angelfish was circling my bait but refused to bite at the last moment. Bummer :(

Finally, 11:30am arrived and it was time to leave. Michael and I had to reserve time to pack our luggage.

It seemed like yesterday that we met with Mark for the first time. All of a sudden, we were parting ways at the hotel parking lot. We hope to fish with Mark again in the future. It was simply too much fun! Mark would slowly work his way north with a stop in North Carolina to fish.

Michael and I returned to my uncle's house to pack. I had more packing to complete and Michael was done early, so I dropped him off at the canal again to try for Cobra Snakehead one last time. Unfortunately, it simply wasn't to be. I waited until 5pm for my aunt to return home to say goodbye. Michael had a solid 3 hour session but didn't get any hit. We'll be at those fish again, perhaps in another canal next time, in the future.

It was a whirlwind of 5 days filled with family and solid fishing. Many, many stars aligned to allow this trip to materialize; and even more stars aligned to yield some of the species that were so highly coveted by us. The amazing accomplishment was that, after fishing Florida for a total of only 33 days over 3 previous trips, I was able to add 17 new species over 5 days for a grand total of 102 new species from Florida over 38 days fished. The marine and freshwater diversity is unbelievable in Florida. And yet, there remained many new species that I can add and I certainly will be back will be back the next opportunity I can find.