Yesterday was basically a white wash fishing offshore. Instead of going back for more punishment, we went with Captain C again. George and Jeff had a very good day of bottom fishing while we were offshore. The plan was to revisit some of the shallower reefs.

We had a couple dozen of live shrimps, and Captain C suggested we should try a couple of wrecks close to the marina before heading north. Our shrimps were largely ignored on the wrecks so we didn't spend too much time. In the fall, when larger predator migrate into the area, live shrimp are key and bites are fast and furious. During the spring, things are a lot slower. I did catch a second Mexican Barracuda without getting cut off. 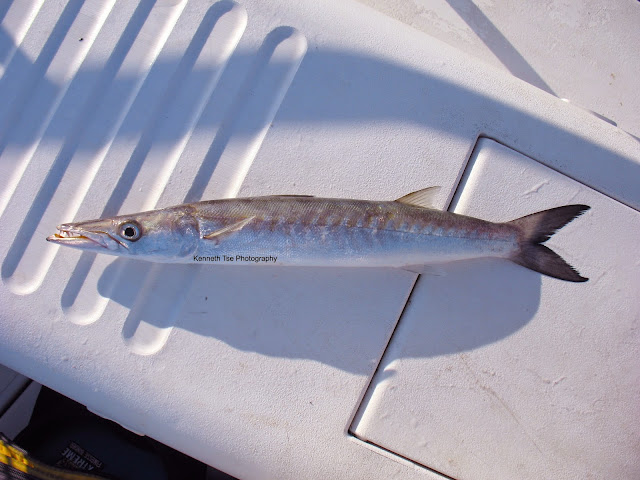 Once on the reefs, we fished bottom rigs with a live shirmp on the bottom hook (with a long leader) and squid on the top hook. The Spotted Rose Snapper were very quick on the bait and they made species hunting difficult. 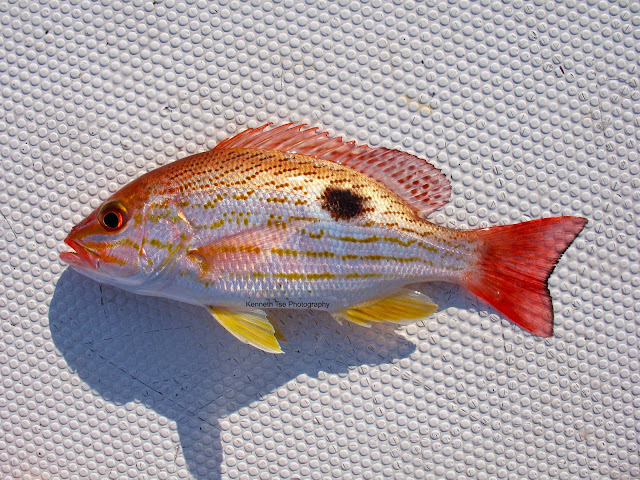 While sorting through the snappers, I felt a good tug on the line and set into a decent fish. Line quickly melted off my Baitrunner and the UglyStik Tiger stayed fully bent. It was obvious that this was a nicer grade fish and I followed the fish around the boat. Guesses started to be made - Pacific Crevalle Jack, Black Triggerfish, Orangemouth Corvina, big snapper...etc. It made repeated long and deep run, very reminiscent to jack family members. The thought of a small Roosterfish crossed my mind.

When I started to see colour, I saw the shape of an amberjack. I could clearly see the dark stripe on the head. Greater Amberjack are relatively rare in the Sea of Cortez. Almaco Jack are much more common. I've been trying to catch an Almaco Jack from Florida for a few years. I've went on party boats fishing pinfish or small grunts on reefs and wrecks. In 2010, a boy next to me caught 3 in a roll while I was hopelessly tangled with the novice tourist anglers fishing next to me. When I saw the high but short dorsal fins on this amberjack, I knew exactly what it was, and the stakes just got higher. The fish commenced to do its death spiral beside the boat and almost ran the line under the hull twice. Luckily, Captain C did a great job to tail the fish. YES!!! The Almaco Jack, aka Longfin Yellowtail, was finally mine!!! 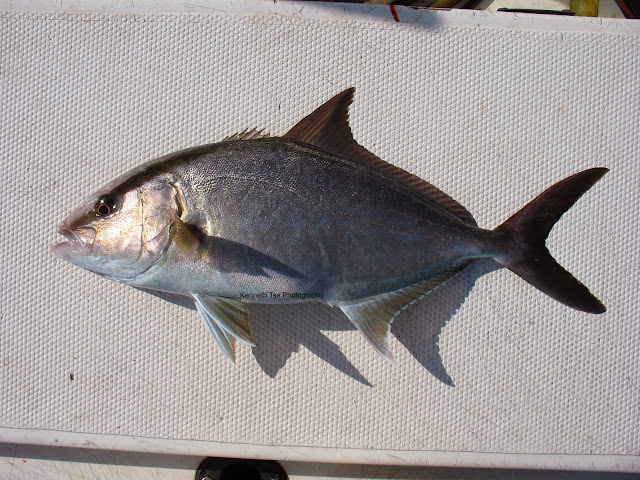 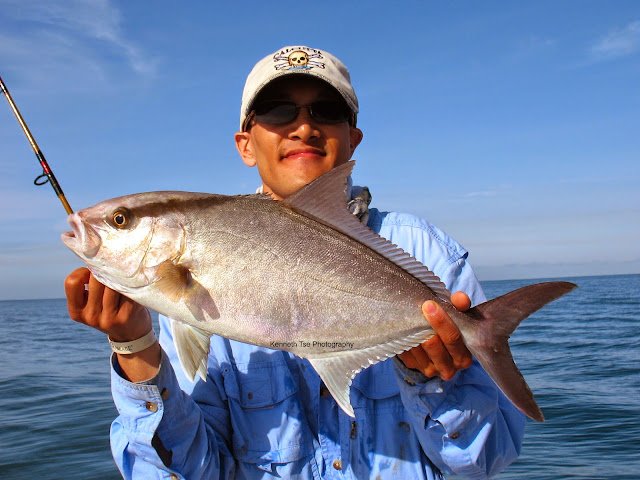 It was strange that the Almaco Jack took a small piece of squid instead of the live shrimp. George said that catching an Almaco Jack in Mazatlan is a very rare event and they only pass through this area over a very short period. I was exceptionally fortunately to have encountered one. 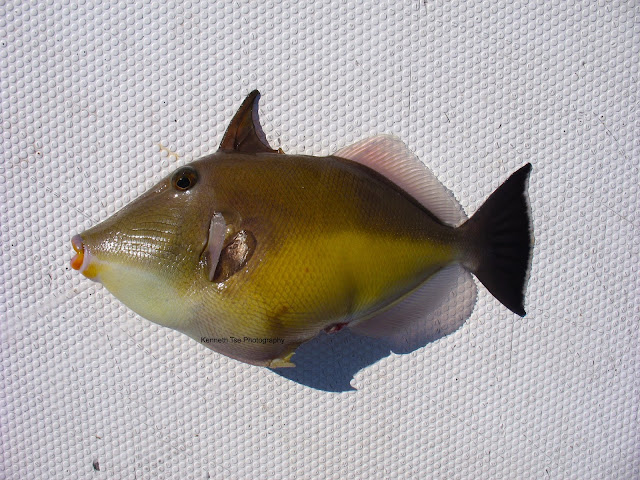 Fishing live shrimp was a waste with snappers and triggerfish around. We used shrimp heads and squid instead. After seeing everyone around me caught their Pacific Graysby, I finally caught one on shrimp heads. 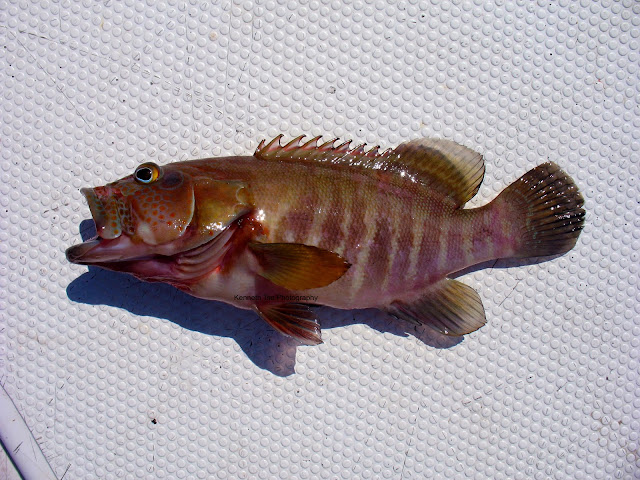 The diversity was fairly low. However, Michael, George and Jeff all caught the Jewel Moray Eel. Again, I missed out on the species. I don't really know why...we were fishing next to each other in the exact same manner with the exact same bait...

Later in the morning, Michael said he saw some banded fish high in the water column. Captain C said they were Pacific Spadefish. Michael and I tried for them by fishing at mid level where these fish were found. Michael hooked and lost one on the surface, and I may have one came off the hook as well. Otherwise, our suspended bait attracted Cortez Grunt and Green Jack.

At the end of the day, we came back to the marina with over 60 Spotted Rose Snapper and probably 30 Finescale Triggerfish. As I was looking around the dock, I saw a juvenile Yellow Snapper, aka Amarillo Snapper. This time, freelining a small chunk of shrimp with 8lb fluorocarbon and #14 hook got the little bugger. 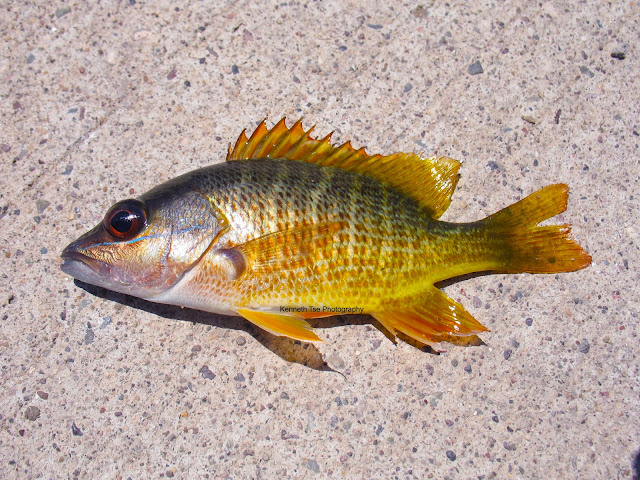 The day was very calm and hot out at sea. It was nice returning to the breezy lobby of the condo in the aftenroon. I love the elegance and tropical appeal so much I had to take a picture. We were spoiled silly on this trip by George and his timeshare condo. 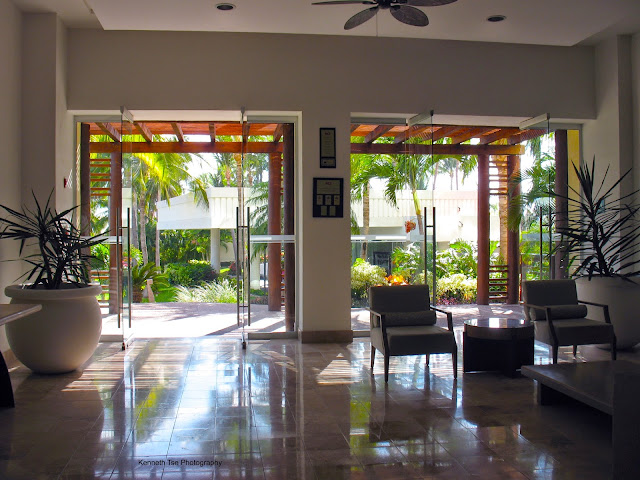 Yesterday, George caught a rare Yellowtail Weakfish. It was one of three that George had caught in over 10 years of fishing at Mazatlan. Since they are great table fare, we decided to visit Los Zarapes again for the great fish platter. 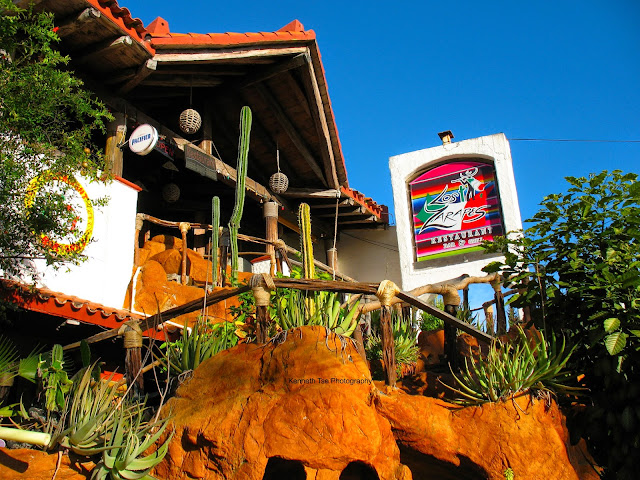 The salsa had a unique full body flavour because it was made fresh with fire roasted peppers and tomatoes. 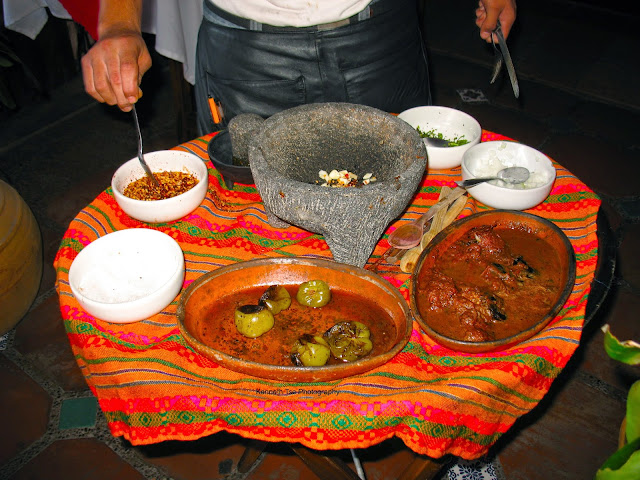 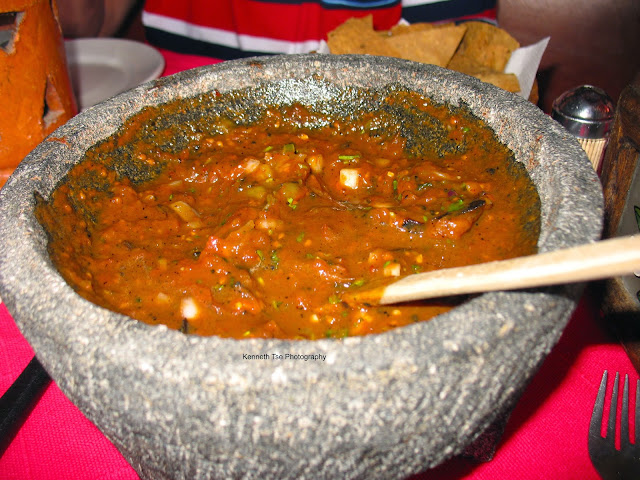 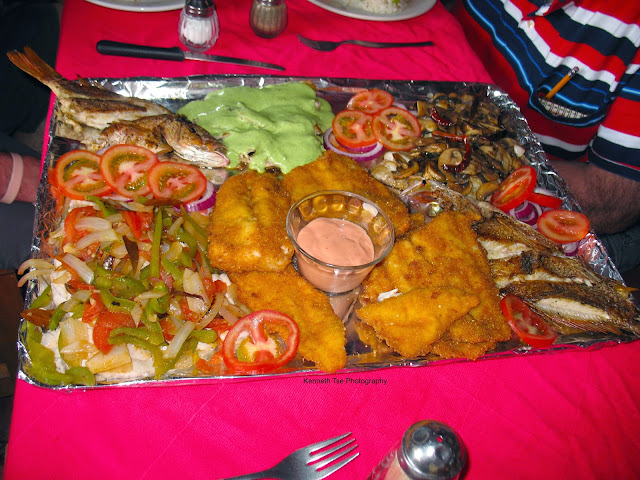 At the end of the day, I was happy to land yet another amberjack species, especially one that I had been trying to catch in Florida on the party boats. That species alone would have made my day, but the fish gods blessed me with three more lifers. We had to make a decision whether to go offshore or stay inshore the next day. With dismal offshore reports, we decided to stay inshore and save some money. Hopefully we'll find more species tomorrow and we won't regret our inshore decision.