Meeting an old friend for the first time

I don't know if many younger readers know the concept of pen pals. Not too far back in the past, people often write to strangers across the ocean. Sometimes, these strangers eventually became persons who you would share many details of your life through letters and post cards. They could even turn into your best friend or soul mate, yet you might have never met them in person.

With the popularity of online forums today, letters are not written anymore, but pen pals (aka forum friends) exist. I have many of them and enjoy our conversations mostly focused on fishing. Many of them I have never met in person.

Mike was one such pen pal of mine. We chat over emails and Facebook a bit about fishing in Yellowknife where he lives, and I've been waiting for the opportunity to share with him some of the fishing opportunities here in Toronto. He does visit my area often since he has family in southern Ontario, but we've yet to find a mutually available time to meet.

Strangely, our first time meeting was neither in Toronto nor Yellowknife. It was on a tiny lake in upstate New York.

On his flight back from Florida, Mike stopped in Ottawa to visit his brother Corey. Our mutual friend Eli found a sweet little lake full of Chain Pickerel in New York. Mike wanted to add a new Esox species to his list for a while...so in short order we decided to converge on this lake to help Mike catch his lifer Chain Pickerel.

Michael and I were tasked to get bait the night before and to set up base camp early in the morning, since we had planned to drive to New York on Friday evening and get some good sleep for the night. A friendly bait shop owner agreed to scoop out a couple dozen of mixed minnows and set them hidden outside the store so we can retrieve them by the time his store has closed. Getting the bait wasn't an issue...keeping them climatized at almost freezing temperature was an issue in our overly heated hotel room. 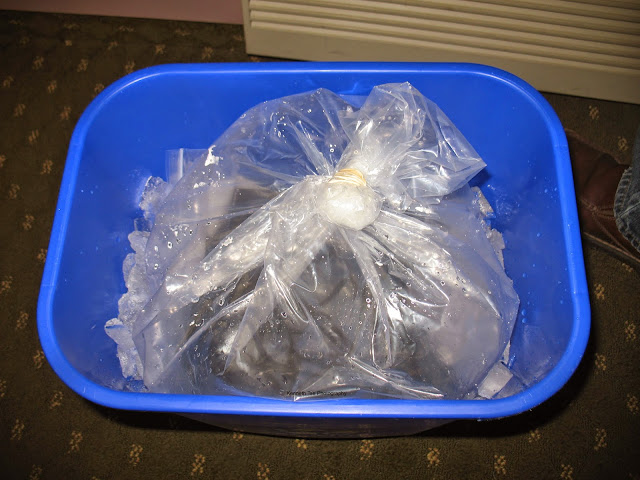 The next morning, Michael and I arrived at the lake by 8am. Our goal was to find a weedline where Eli had suggested. I was too busy to look up too much information on the lake aside from satellite photos. We really don't know how fast and deep this weedline would end. Using Michael's power auger, we quickly went to work to understand this structure. Our first hole ended up set over 6 feet of water with some weeds on the bottom, but the water was mucky and smelled of badly decayed matter. We backed off the bay a bit to find some cleaner water, and soon found the steep dropping weedline that went from 2 feet to 12 feet within a reach of 15-20 feet. I guess that's what we were after!

Just as we finished peppering the area with 10-inch holes ready to fish, the rest of the gang showed up. After a quick hello to Mike, Corey and Eli, everyone got to work.

It took all of 15 minutes before Mike landed his first Chain Pickerel on a minnow and jighead. He was using Eli's Marcum and saw a fish appeared on the screen before taking this fish. 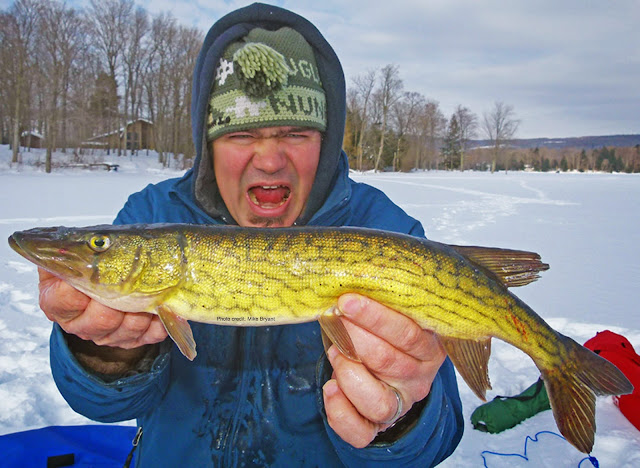 Michael was working a Shad Rap when he saw a suspended fish on his screen. After a longer than expected fight, we saw a silvery side that completely stumped us. At first, the tall back of the fish suggested Lake Whitefish, but a closer examination revealed it was a giant Cisco! 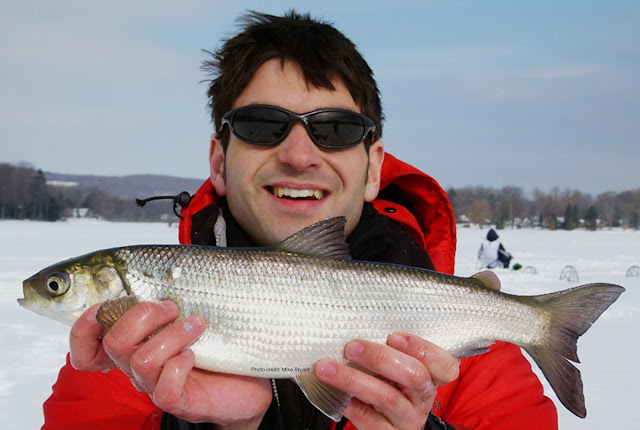 You got to understand this...we were fishing a lake that was only 35 feet at the deepest. The majority of this lake average 12 feet except for one small but deep hole. There were few feeder creeks into the lake that can cool the water in the summer. In fact, Eli said this lake was completely weed choked and he can't understand how a Cisco, a coldwater fish, can even survive, nevermind growing to such giant size.

We thought it was a huge freak of nature and returned to Chain Pickerel fishing, not expecting to catch another one again.

Finally, one of my set lines was tripped and I had a little pickerel taking a bit of line. I asked if Corey wanted to take this fish since he has never caught one before. Corey didn't want it but Mike wished to have a second experience with the pickerel. Soon, another nice Chain Pickerel came up the hole. 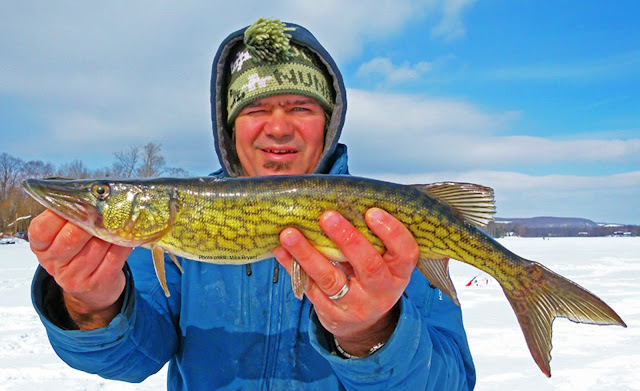 Fishing started to slow after 11am. I managed to have a couple more hit and miss. All of a sudden, there was commotion again and Michael found another Cisco! 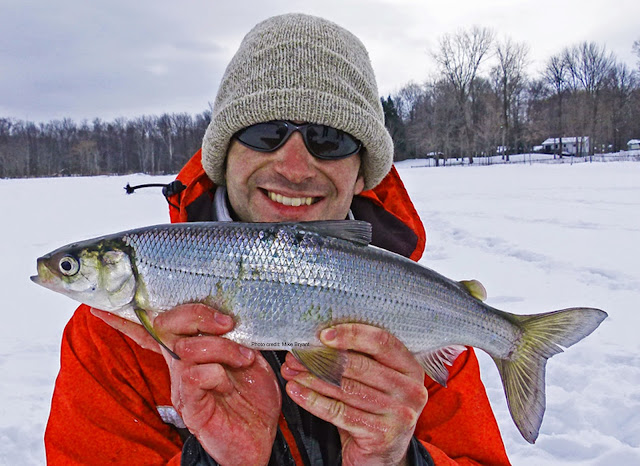 This is really a head scratcher...

Now everyone went to work to catch one of these giant Cisco that were not supposed to survive in this lake. Mike caught a bunch of small Yellow Perch and a little Largemouth Bass out in 15 feet of water, while Michael and I remained to fish at 12 feet of water.

We were expecting one more person to arrive. He is known as krazyk on the internet forum. I don't know him at all, but Eli had invited him to join us for Chain Pickerel fishing. When Ethan (krazyk) finally arrives, he explained that this was only his second year fishing and he had been trying to catch a Chain Pickerel through the ice. He had no success so far except for stolen minnows. I made a point to help him catch his first Chain Pickerel if I get another hit again.

Around 2pm, the weather changed from overcast to sunny. That little change spurred a little activity as my set lines were tripped a few more times but fish would always dropped the bait before I can get to it. Switching one rod over to jigging, I soon saw three suspended marked on screen. As I reeled the Shad Rap up to the bottom fish, I felt a tap and hooked it. At almost the instant moment, Michael was hooked up too. What came out of our holes were probably the most ridiculous double header all of us had ever seen. 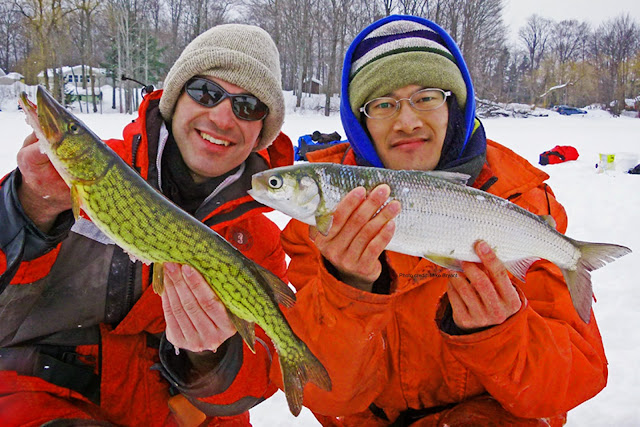 Here it was...a Chain Pickerel often associated with warm, weedy and often boggy waters next to a Cisco that resonates with cold, deep and crystal clear waters. It really makes no logical sense why these two should be found in the same lake, irrespective of our ability to catch them from the same location less than 10 feet apart!

Before the afternoon fury finished, I would get one more hit on the set line. This time, the fish cooperated and finally Ethan was able to check the Chain Pickerel off his list! 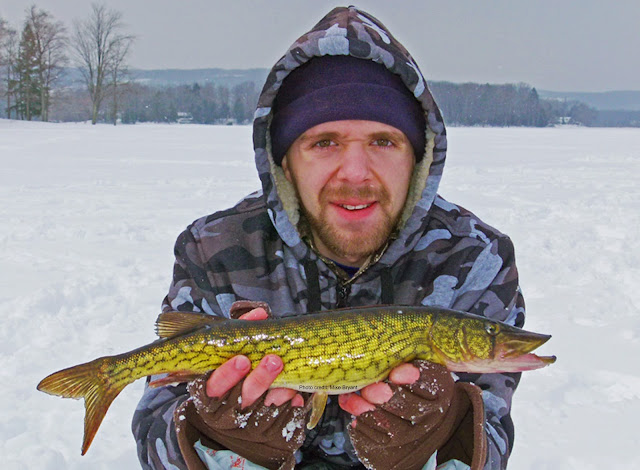 Right after this fish, the weather changed completely. The wind picked up and it started snowing. The bite stopped completely and it was close to 3pm and we decided to call it a day. Initially, we had hoped to fish with Eli and Mike the next day as well, but Eli had a list of spring chores to finish. In the end, Michael and I drove back to Toronto that afternoon and got an extra free day for the weekend.

It was such a great pleasure to meet Mike, Corey and Ethan for the first time in person, and to fish with Eli again. Mike and I discussed a future plan that I hope to make it happen this summer if all goes well. I'll just keep it under wraps for now...

Posted by MuskieBaitAdventures at 1:58 PM