In search of the Simcoe Sasquatch

The Burbot, a freshwater cousin to the well known Atlantic Cod, is a fish that not many people targeted. Often describe as eel-like, slimy, stinky and ugly, these fish get a bad reputation that they really don't deserve. They are one of the harder fighting fish that you can find while icefishing, and if you can find a spawning aggregation, you can be sure of some fast action.

However, finding one of these spawning aggregation requires fine tuning to time their all too short spawning period of 2-3 weeks, and their spawning sites can be very elusive on a big expanse of water. There are simple too many potential shallow areas where they could spawn, but only the Burbot knows why a certain site is chosen.

After our most consistent Burbot lake was closed to protect the Lake Trout population (it is so freaking stupid!), Michael set out to search for Burbot on Lake Simcoe. A friend of mine had caught 10 giant Burbot on Simcoe back in 2010, but details were scant and consistency hasn't been achieved. While search somewhere in the middle of nowhere on Lake Simcoe, Michael caught Burbot on two separate nights recently. Simply finding one Burbot on Lake Simcoe was rare enough, but finding them on back to back try on the big lake was impressive. It's like finding Sasquatch on back to back tries. He asked if I was interested in joining him in the hunt. Seeing it was March Break for me, we planned to spend two nights on Lady Simcoe to hunt for that elusive Simcoe Sasquatch.

On Saturday morning, we set out early hoping to spend the day exploring the mid lake area for Lake Whitefish and Lake Trout, while trying to narrow down potential areas to fish for Burbot at night. Since we were spending two nights out on the ice in our portable shelter, we need to ensure we pack well for the trip. At 15km from the launch, it is a pretty high risk trip should anything went wrong in the middle of the night. Even with lots of gear, I am the reigning Tetris Master when it comes to packing. We had everything fit inside Michael's flip style shelter and ready to go. 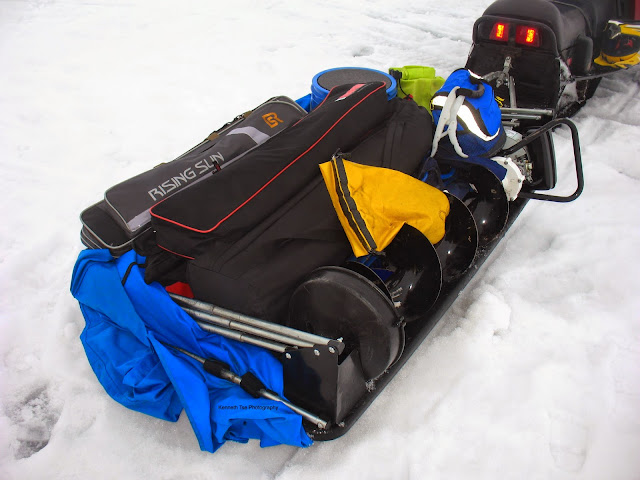 Our 15km ride to our location was quite treacherous. It was warm and drizzly, leading to significant snow melt and slushy conditions. We had to travel slowly and carefully on the snowmobile so as not to get stuck. Area without snow was often littered with jagged ice that was difficult on the tracks and we were bounced around a bit. Cautiously, we made it to our spot with all the gear in tow and alive.

The first day of fishing turned out very slow. Using the Navionics map on my phone, we checked various spots to find very little happening. Our best spot of the way was the tip of a flat top point in 71 feet of water where we found a few suspected Lake Whitefish and both Michael and I got one tap from a passing school. With a lot of running and gunning, time passed quickly and before long, it was time to set up base camp.

While we were setting up for the evening, we met my buddy who caught those 10 Burbot one day in 2010. After a good chat, he wished us luck and we started chumming the area. We were told by another friend that chumming is the key...and we really chummed the heck out of the area.

As the sun set, it became progressively gusty. In fact, our plan to explore various spots after dark was scrapped in favour to hunkering down at camp. Starting around 7pm, we marked some fish tight to the bottom that would linger around a bit. They looked exactly like Burbot marks, but these fish would not bite at all.

Around 8pm, after not marking any fish for a while, I was just jigging away trying to attract any fish while I felt a tap and a fish on the line. This fish gave up more fight than a Burbot normally would and we were expecting a Lake Trout when a Burbot came up the hole! This fish must have been hugging bottom since I didn't even mark anything at all. 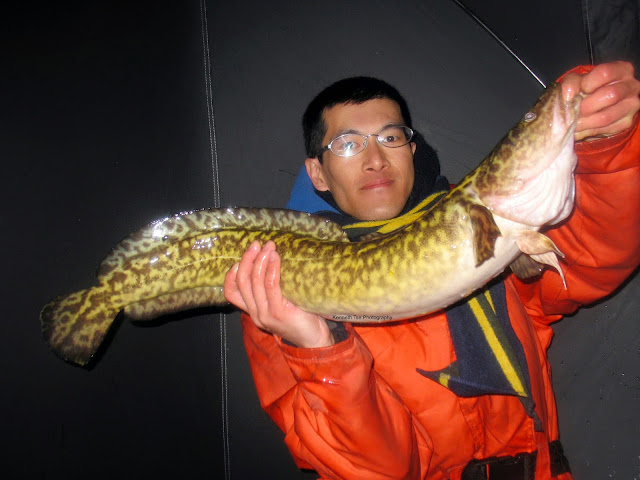 I don't know how anyone can call these fish ugly. They have such a unique and beautiful pattern on the body. 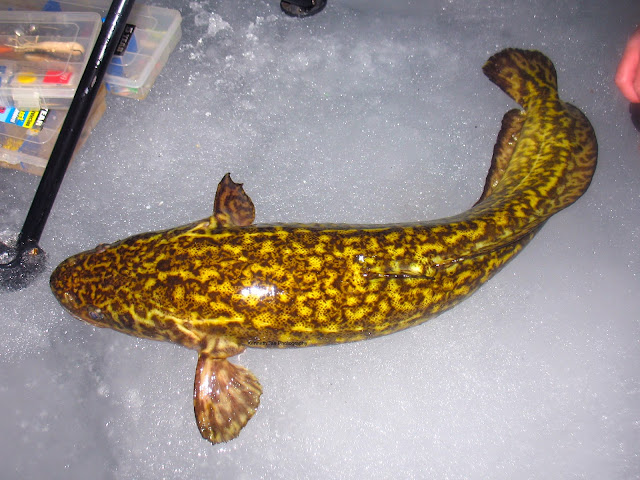 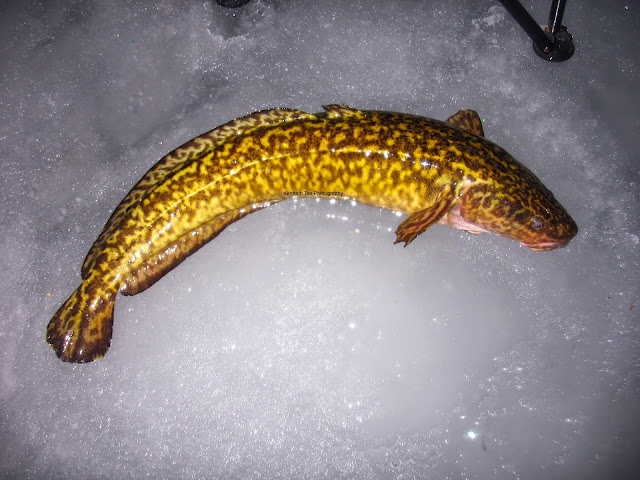 After this fish, we got excited to know we were in the right area. In fact, this was the same spot where Michael caught two of them in the recent week, so there appears to be a bit of consistency.

With hopes high as ever, we fished more intently throughout the night, but fell flat on our faces. I was jigging past 12am until I was too tired to continue fishing. Just before I turned the lights out, I lowered a couple of very lively minnows to fish while I slept. When I woke in the morning, they were still as alive as ever...and untouched. Michael also said he saw no activities and zero marks on the sonar. It was a bit defeating after having landed one from the spot.

The night was interested since it was so cold and gusty. I woke up cold at 3am since my heater wasn't strong enough to heat the entire shelter. In the end, I survived by putting the heater behind my camping chair so my back and core would be exposed to the warmth from the back side, as opposed to having the heater at my feet pointed toward my front side. Michael tried to shrink down his flip hut but it was much too windy for his hut to stay intact when collapsed into a smaller size. Neither of us really had much sleep at all.

With us up and early in the morning, and seeing only a couple of marks at our base camp, we decided to make a small move to fish another just 90 metres away. It didn't take long before we were marking a few fish. Soon, one fish took my Bad Boyz jig and I was into a good battle. It was pretty obvious that we have a Lake Trout on the line. 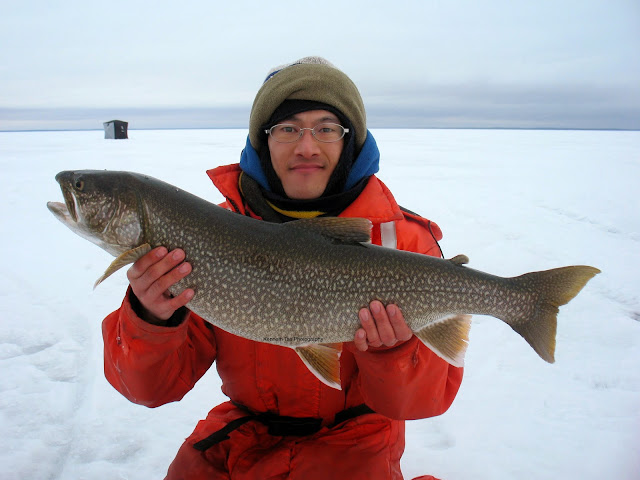 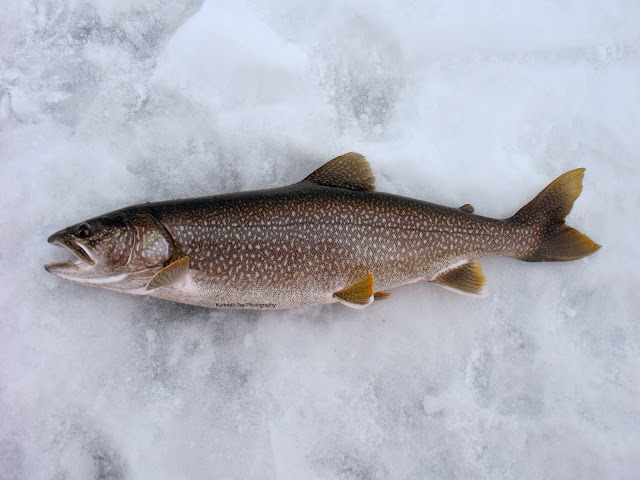 Fish always knew to bite when you were the most inconvenienced. In this case, I was just having my breakfast sandwich when the Lake Trout hit...and my sandwich ended up tossed on the ice. That's OK. I would get rid of my sandwich any day for a fish on the line! 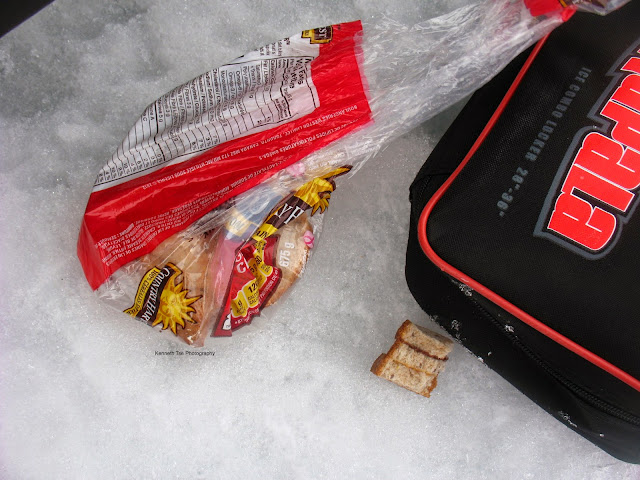 We thought it would be a decent spot to spend more time, but soon we had blank screens after blank screens. Absolutely nothing was happening. It was still a bit gusty so we decided to head back to base camp and fished from the shelters.

Around mid afternoon, our nearby neighbours that had set up shop about 100 metres from us came for a visit. They said they had been on fish all morning and they had two free holes for us to try. Michael and I decided to pack light and simply walk over to the spot. I took only one rod, my sonar and three tackle trays. This is where I store tackle trays when I'm traveling light. 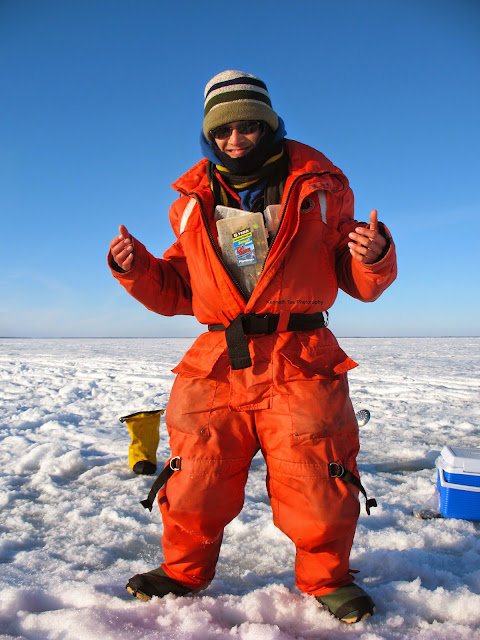 Our neighbours were using pinhead shiners and they had been chumming massive amounts of shiners to attract and hold the fish at their location. Michael had wanted to bring some pinheads but his local bait shop was out of them. Our friendly neighbour shared some of his bait with us and on the first drop, Michael hooked a Lake Trout! 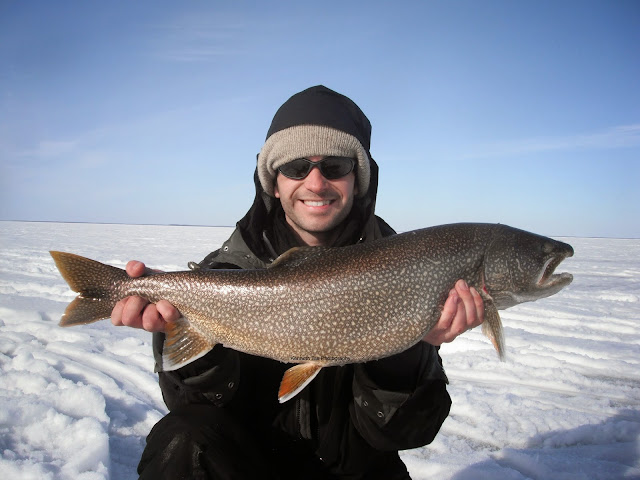 We thought it would be on fire from there onwards, but after getting only a couple more lookers on the screen, we were back to staring at blank screens. We didn't have enough shiners to chum and apparently chumming was the key. As such, we had no further success even when we were only 50 feet from our neighbours.

When it was close to 6pm, Michael and I decided to start chumming our base camp again to prepare for our second night of Burbot fishing. We had a beautiful calm evening and the sun was setting on the last day of the icefishing season for Lake Trout and Lake Whitefish on Lake Simcoe. It was tremendously sad that I was only able to fish this lake for 3 days this winter. Seeing this last sunset was a bit moving. 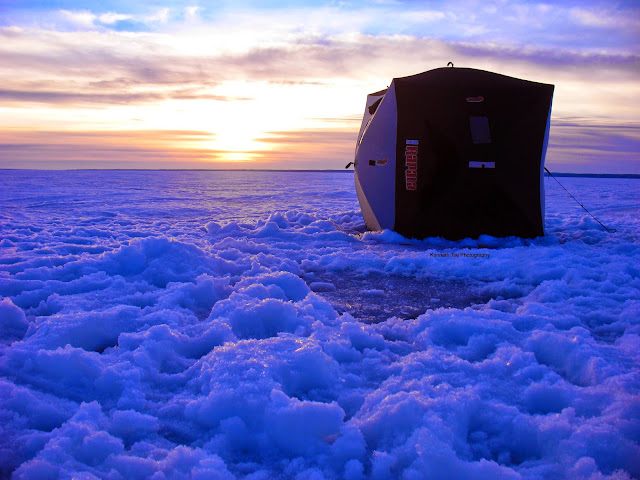 Close to dark, we again saw some fish on the bottom that resembled Burbot marks but none would bite. Once dark, the screens were blank again and all was quiet. Once our neighbours packed up, with their limits of Lake Trout plus 3 Lake Whitefish, we decided to try their location for Burbot. About 15 minutes after we started fishing their spot, a Burbot moved in and took a liking to Michael's lure. 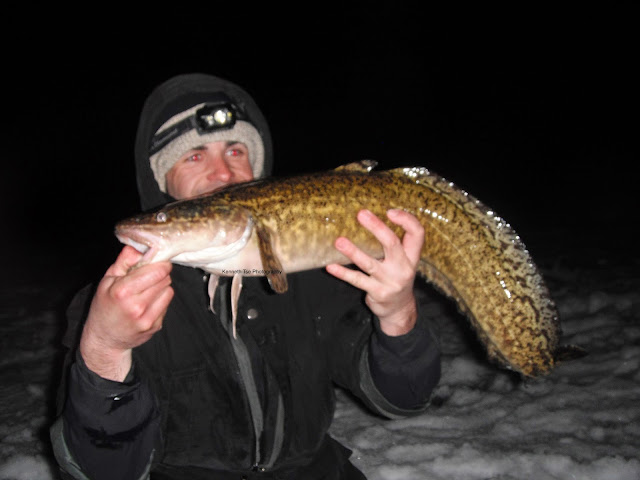 Expecting more action to occur, we stayed at the spot until 11pm but nothing else transpired. It was late and we were tired, so we once again sent down a couple of lively minnows to the bottom before turning the lights off. On this second night, it was calm and warm. I remember shutting my eyes around 12am and opened them at 5am like no time had passed. Since the season for Lake Trout and Lake Whitefish had closed already at 12am, I did a bit of casual searching for Burbot early in the morning before we deciding to pack it up at 8am.

Our return trip was a bit easier since the cold snap at night tightened all the slush. Travel was much easier but still required caution and slow speed. We were just glad to make it back to our launch with a couple of Burbot under our belt. Next year, we plan to start searching earlier in hopes of finding that one holy grail...a major spawning aggregation of Burbot on Lake Simcoe.

Posted by MuskieBaitAdventures at 3:23 PM