This was our last day in Virginia. Pat suggested that Eli and Ella should try a spot about an hour way from Longear Sunfish and Spotfin Shiner. Since I had caught both species already, Pat and I would try for American Eel and White Catfish again while we cast lures for snakeheads.

It didn't take long before Pat was into a snakehead. 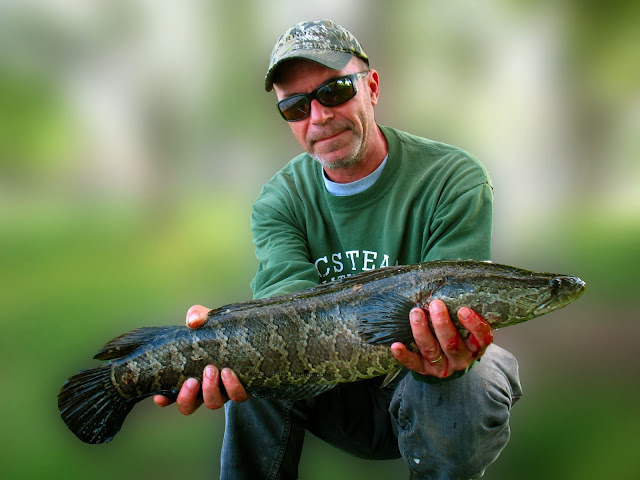 Shortly after, I landed one of my own too. 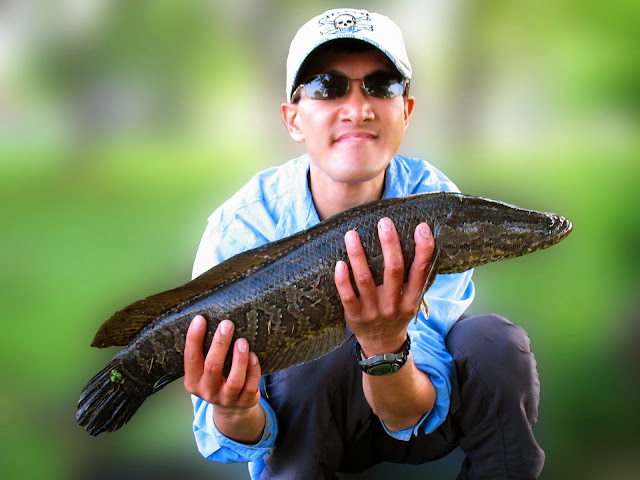 These fish were caught blind casting. As the bite stopped, Pat suggested a spot with an underwater pipe where catfish might congregate. After I tossed out the catfish line, I started looking for snakeheads. Immediately, I saw one surface for air but, since it saw me, the fish quickly sank deep. I made a couple of casts with no take. Just as I was getting ready for another cast, I noticed a bit of movement. Right below my feet was a snakehead slowly cruising beside the wall. The little ledge prevented from seeing me. I slowly lowered the lure about 4 inches from its path and jiggled it a couple of times. Immediately, the fish lunged forward with the mouth open. Even though the line was vertical, the hook was set properly. A short fight later, I hand lined this fish up for a photo session. 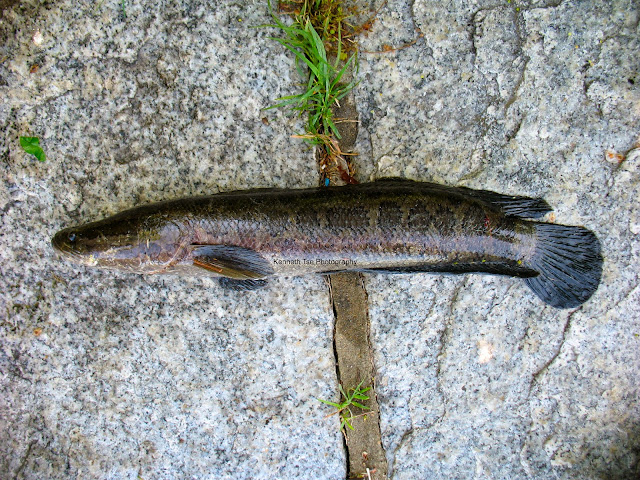 They are simply too much fun!

I spent another 30 minutes in this spot without any catfish bite or snakehead bite. Pat suggested that we move over to the other side.

There was a certain cherry tree where Pat often find snakehead hiding underneath. Indeed, we found three snakehead sitting just below the surface under this tree. It was not easy presenting lures to these fish as the overhanging branches would snag an errant cast. Pat gave me a go at these fish, but I failed to get them to bite. They initially showed a bit of interest and followed the lure a feet or two, but soon they figured out the game and swam off. When I left the area, they would return to the tree, but as soon as they heard or saw my lures in the area, they would sank out. Aggressive fish these surely aren't!

Under another tree, I saw another snakehead slowly cruising under the surface. I cast my lure toward the fish and immediately received a hit! However, it was not the snakehead but rather a 2.5lb Largemouth Bass. I wonder which is more aggressive...the Northern Snakehead or a Largemouth Bass? I can say in this case that the bass beat the snakehead to the lure. Again, aggressive fish these snakehead sure aren't!

Pat was using an ultralight rod, micro jig and Gulp! to catch sunfish and crappie. Meanwhile I had a rod soaking worms for quite a while for White Catfish and American Eel. Finally, I had a pretty good bite and it seems very much like a catfish. Unfortunately, it was a 2lb Channel Catfish.

With Snakeheads not biting and my target lifer not cooperating, I picked up Pat's ultralight rod and played with some Bluegill Sunfish, a Pumpkinseed Sunfish and a couple of White Perch. As the tide dropped, Pat suggest that we work our way back to the other side. He said low water was prime for topwater bite, so we tied on some frog lures. As we came to the corner where I caught the last snakehead, the low water revealed a jaw dropping sight. In that corner alone, there were easily over 10 snakehead congregated and I didn't even had to try to count them. There were more snakeheads in the immediate area, and we saw more swimming just under the surface a little further away.

It didn't take long before we had snakeheads following our frog lures. However, if they saw us, they would give up the chase. Since I was fishing from a high vantage point, it was almost impossible for the fish not to see me. Instead, I tied on a subsurface lure and works it with the same hopping retrieve that had been successful for me a few days prior. I had multiple follows from fish but they were still wary. Finally, I had a pair of fish followed with more intent and one fish lunged at the lure. I saw a huge disturbance of mud and bubbles as the fish took the gulp but did not feel the bite or the weight on the rod. The fish missed the lure!

Many more attempts later, I had the same thing happened. I wondered if the lure was too heavy for the snakehead to vacuum into their mouths. I will ponder this and chat with Pat some more to see if we could experiment on it a little.

Pat went on to fish the other side of area. He said there were over 30 snakeheads when he first started and many of them showed interested in his frog. He caught one, but many of them now had smarten up. Armed with my subsurface lure, I started to locate some possible targets. There was a pair of snakeheads slowly cruising close to the wall. Using my ninja skills, I moved away from the wall as I cast the lure toward their position. I could just barely see the fish as I worked the lure into position. After a couple of hops, I felt the hit and took my third snakehead of the day. 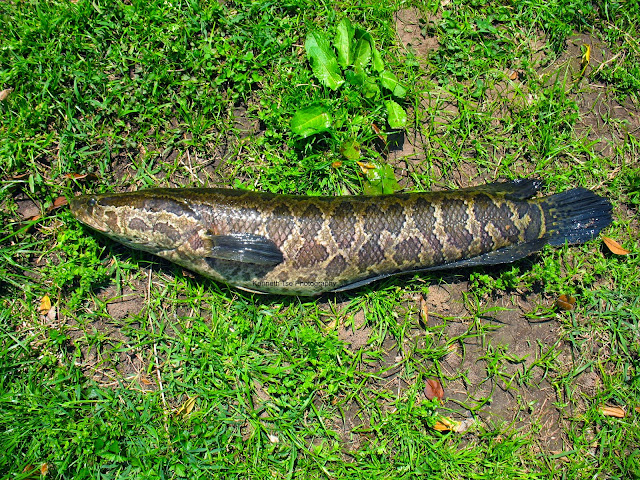 This fish gave me a very beautiful lifer picture to represent the species. In addition, it had a tag on its back. 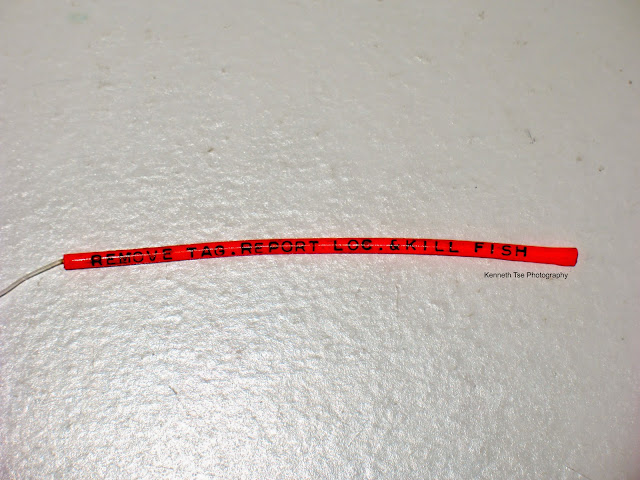 I removed the tag but certainly did not kill this awesome fish. It's hard for me to kill any of them unless they could not be revived. After calling in to report the tag, I found out that they wanted to know where I caught the fish (I only gave a general location), its size, the lure and technique I used, and whether the fish was killed. The operator sounded disappointed when I told her it was released LOL.

As a reward for reporting the catch, they are sending me history data of this particular snakehead as well as a ball cap with a snakehead embroidery on it. Apparently, the cap will say "Snakehead Control" on it...which is pretty bad ass.

We were literally surround by snakeheads of all sizes. Some where 2-3lbs and some appeared to be 10+lbs! However, all the fish were extremely cautious and we were lucky to received a few more follows.

At around 2pm, Eli and Ella finally met up with us. Eli caught 3 more lifers during his hunt.

Their flight would leave at 5pm so they had to get going. However, we needed to at least get one group shot before they left. We relocated for a photo opportunity. After all, we needed a little proof that Eli went to Washington DC. 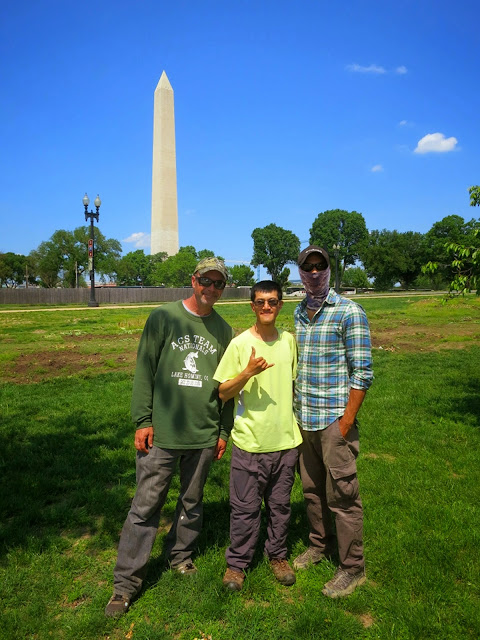 And just like that, our 4-day adventure came to past. It was a lot of fun fishing with two crazy fish nerd. We spent many hours simply chatting about fish species and our past adventures. Pat told us about his recent fishing trip to the Clinch River where it was rich in endemic fish species. Both Eli and I were mesmerized by Pat's tales. We have already agreed to try the Clinch River the next opportunity available...so the three of us will definitely reunite in the near future!

This had been a very tough lifelisting trip. In fact, it was unprecedented since I only caught one new species over the 4 days. Coming into this challenge, I knew the targets were extremely difficult, but there were some easier targets such as Bluehead Chub that simply baffled us. I did rejoiced in Eli's 15 lifer accomplishment within the 4 day period and it was worth every penny and minute being there sharing his success.