As I said before, we couldn't have picked a better weekend for lifer hunting for Eli. When I visited Virginia last April, it was too early for the shad and herring run. We got lucky landing 5 Hickory Shad, but it was just at the start of the run. This year, our timing in May coincided with the tail end of the Hickory Shad and the peak of the American Shad as well as the Blueback Herring.

All three Alosa species would be lifers for Eli. Last year, I caught the Hickory Shad in Virginia and American Shad in Quebec. Blueback was the remaining possible lifer for me, although there was also a remote chance I could catch one of the many Quillback that were in the Potomac.

Last year, Pat took us through a pretty rough route down to the river. You needed to be a mountain goat to navigate that route. But Pat found a marked trail this year that only had a short stretch of rockiness. It was quite a bit less treacherous and all of us made it down with no issue. I wish I had taken more pictures, but as always, we were a bit too busy to take out the camera.

The river was a bit more coloured than I remembered last year. However, there were shad surfacing constantly. Originally, Eli and Ella were commenting on every rise. Eventually, it became a monotonous occurrences in the background. 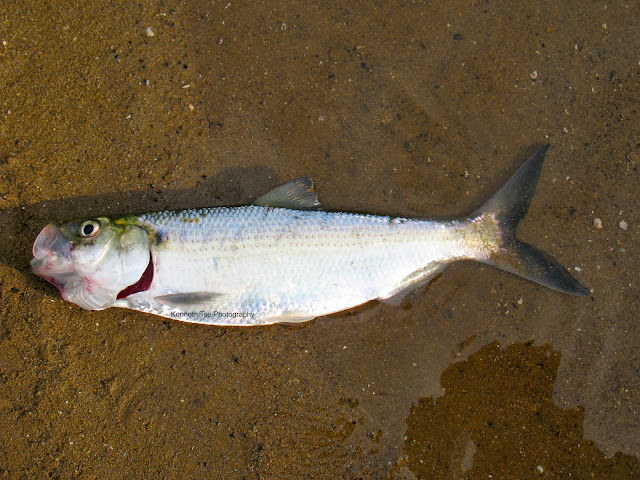 Shads are quite delicate. If they were deep hooked, they likely do not survive. My Hickory Shad was hooked deep and require a bit of surgery...so I only took a quick snap before releasing it.

Shad, like salmon, do not feed during their upstream spawning migration. But like salmon, they often strike out of instinct. Some days, these fish would strike a lure that was drifted with the current. Other days, they would strike a lure that was swung in the current. On this day, I found most success when the lure was retrieved at a medium pace at the end of the swing. Fish often came up from the depths to crash the jig as I prepare for the next cast.

The water at our feet were quite deep. We were perched on large rocks and the water easily dropped to depths over our head if we stepped off the rocks. Shad schools were rushing right at our feet. Since I had a few hits at the end of my retrieve, I tried to vertically jig as fish rushed by. It took about 30 seconds before a silver flash connected with my jig on the upswing.

This was a better fish that cartwheeled in the air. Hickory Shad are quite acrobatic, but Pat said American Shad usually don't jump. My experience with the American Shad was different since those fish loved to be aerial. Perhaps this was a Quebec Shad since it jumped a few times.

I needed a good picture of an American Shad. This one was pretty good and it may be my new lifelist picture. 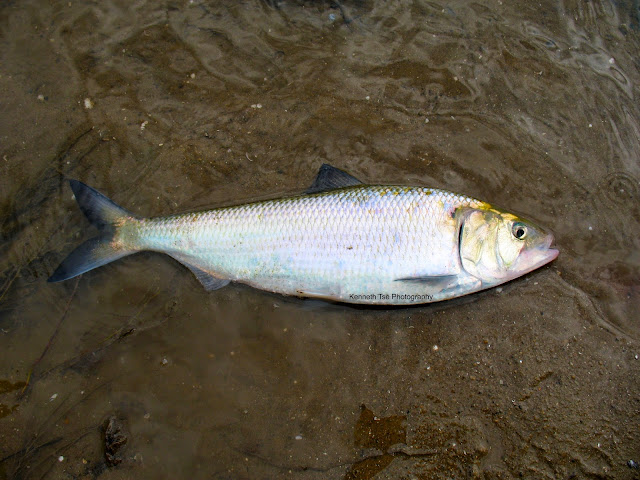 Part of what makes a lifelist angler successful is the attention to details, not only in fishing techniques, but for fish that we can see in the water. Being able to notice subtle difference in fish size, colour, pattern and colour could lead us to identify possible new species to target. Among all the shads swimming about, there were some smaller and more streamlined individuals in small schools. I suspected that these could be Blueback Herring since the small streamlined shape fits the description perfectly. Trying specifically for these smaller fish, I finally hooked one but had it jumped off.

Although Pat and I caught a few shad, it was pretty slow compared to the amount of fish surfacing in the area. Pat suggested a move downstream since the deep, rocky water was not the right place where I may catch a Quillback. So we parted from Eli and Ella to search for some Quillback waters.

A short relocation later, I found a spot where there was a big rock over deep water in front of me, but the water to the right of me shallowed into a sandy cove. I rigged up a split shot rig and put on half a worm to soak for Quillback. At the same time, I could cast the plastic grub and jig for Blueback Herring.

After catching another Hickory Shad and American Shad, I was wondering if these small shad were Alewife instead. Alewife superficially resembles Blueback Herring and much of their meristics overlap. Short of looking at the peritoneum, which is black to dusky in Blueback Herring and pale grey or pink in Alewife, but even that feature does not always hold. It is very difficult to distinguish between the two. These two species are often lumped into "river herring" since identification is often uncertain. The size of eye is quite a definitely feature though. According to Gulf of Maine Research Institute, "the former [Alewife] the eye is broader than the distance from its forward edge to the tip of its snout and the back grayish green, while in the latter [Blueback Herring] the eye is only about as wide as the distance from front of eye to tip of snout". Anyways, my point is that Alewife look similar to Blueback Herring. Alewife's diet consist of mostly small items such as amphipods, zooplankton and shrimp, while adult Blueback Herring do predate on small fish. If these fish were Alewife, they are much less likely to strike a lure.

Just as I was pondering these facts, I had a hit on the retrieve. Immediately, I saw it was a smaller shad and the fight became a nervous struggle. Will I catch a new lifer on this difficult trip?

There was just a little bit of water for me to swing the tired fish into a small pool. At long last, I was able to take a look at the fish. This fish lacks the iridescent dusky spot of the Hickory Shad and it certainly did not have the rounder and blunt head of the American Shad. Finally, I caught a lifer! 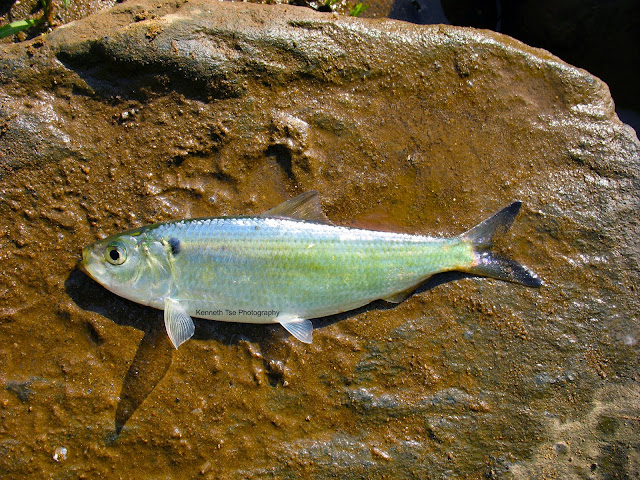 After the first, I caught two more Blueback Herring. Now my focus switched to Quillback. Although I was still casting for shad (since they are so much fun), I was constantly looking at the rod tip of my soaking worm. Since shad schools were swimming about, their bumping into my line often gave me false hope that I had a biting Quillback.

Finally, I had a real bite! Unfortunately, it was a White Perch. This picture may end up on my lifelist though since it was quite good. 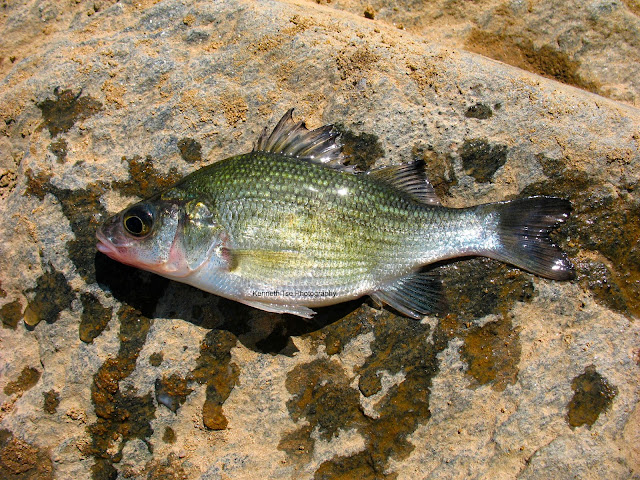 While I landed the White Perch, I heard Pat calling for me. Pat had an American Shad on the line. Although he had caught them before, he didn't have any picture of them. These are species lifelisters like to call "photo lifers", and often, catching a photo lifer is just are frustrating as catch a new lifer. This shad was not small either and it was giving a valiant fight. There was a small pool next to Pat where he could guide the fish for landing. If we could get the fish in the pool, even if it came off the hook, it was next to impossible for the fish to escape us. The only issue was that the mouth of the pool has very little depth. I started to clear the rocks at the mouth and eventually created a deep enough path for Pat. After a couple of attempts and nervous moments, we had the fish!

Congrats Pat! It was an impressive photo lifer. The picture was awesome since it showed the dusky spots on the side that is often very difficult to capture in photos. He had a good photographer LOL. 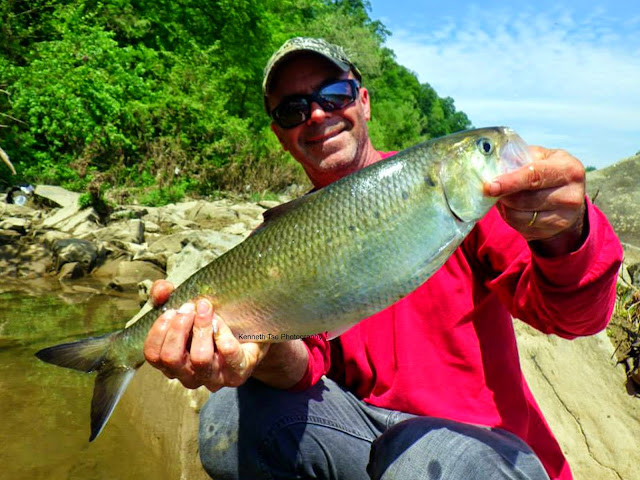 I returned to my rock, tossed in a worm and caught another White Perch...and then one more. Even though I had Quillback surfaced next to my line twice, none would bite.

It was well past noon. It was sunny and about 90F so we were really feeling the exhaustion. Pat and I eventually returned to Elijah. He had added three more lifers and completed the Shad Slam!

While Ella attempted for her own darter, I took a picture of the surrounding. 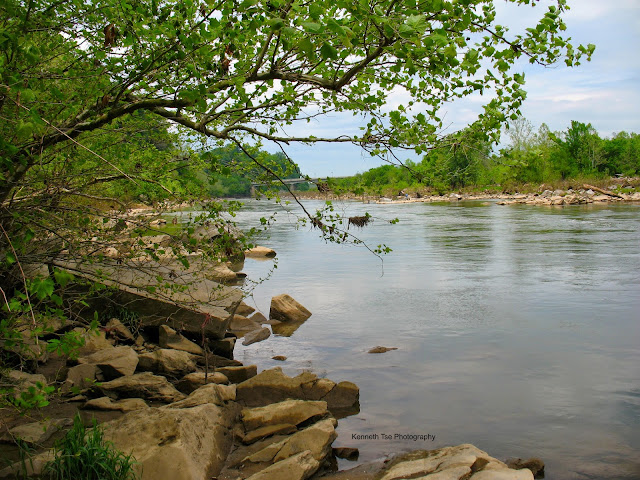 We were all quite tired, so the plan was to return home for some fried fish and an afternoon nap, and then regroup in the afternoon to fish for more snakeheads.

Pat's wife Lia wanted to join us for the afternoon fishing, so Pat and I waited until Lia finished work. However, a storm moved in around 7pm and prevented us from fishing. We finally met Eli and Ella at 8pm. Eli and Ella had been fishing since 5:30pm and Eli reported catching two snakeheads before the storm.

As much fun as snakeheads were, Pat said he had caught American Eel and White Catfish at this location. In fact, these two species were what I was hoping to target on this night. In addition, the presence of Brown Bullhead also interested Eli. Thus, while Lia cast lures for snakeheads, the rest of us soaked worms for various targets.

It wasn't long before we heard Lia's excitement as she landed a nice Largemouth Bass. I was too far to take a picture, plus I was watching Pat's gear as he went to Lia's side.

Even though the post-storm condition was prime, the catfish apparently did not receive the memo. We didn't have any bites until I caught a Bluegill Sunfish an hour after we started fishing. Not long later, I caught a White Perch. Seeing the slow fishing and being quite tired, Eli and Ella called it a night. Pat and I continued out attempted until it was about 11pm. At the end, we had to call it a night since Lia had to work the next day.

As we were packing up, Lia declared last cast. Close to the end of the retrieve, Lia was excited again as a fish jumped out of the water a few feet from shore. On a short and tight line, the fish spent more time in the air than it did in the water. Eventually it was tired enough that it came to shore quite cooperatively. At the end of the line was Lia's first Northern Snakehead. We certainly didn't want to lose her lifer, but without a net, our only option was to handline the fish a few feet up onto land. Luckily, the 15lb fluorocarbon held and the hook managed to stay secured. For her first Northern Snakehead it was definitely an impressive one. It was around 8-9lbs, but the photographer made the fish much more impressive ;).

Lia and her lifer Northern Snakehead! 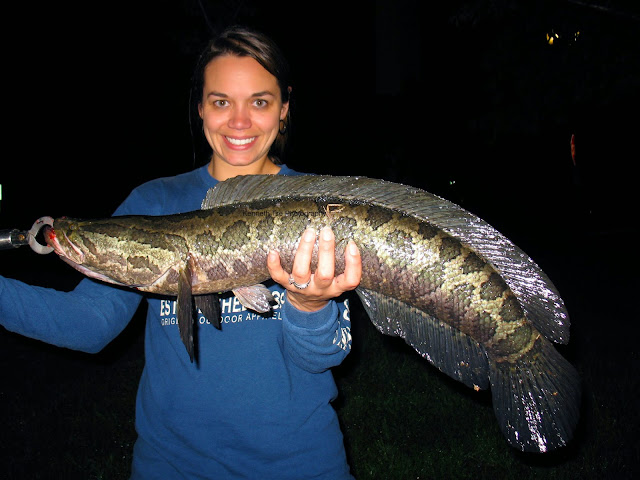 This was the perfect way to end the night!