As we planned the itinerary, there would be a few opportunities for me to catch some new lifers. Although I have only caught 12 new species from Virginia, much of the available species in the area had already been added on my lifelist from elsewhere. For example, although American Shad was in the area, I had already caught it in Quebec. Thus, the available new lifer targets for me were rather limited...and these limited opportunities would not be easy.

Pat did suggest one river where I could potentially catch a few easy micros, especially the Bluehead Chub. On the macro end, we may find Spotted Bass. So the plan for this day was to check out the river in the morning, then head to a set of bogs where Eli can fish for his lifer Flier and Chain Pickerel.

After about a 2 hour drive, we arrived at a little boat launch beside a small river. It was literally raining inchworms...and we thought this may be one of our issue. I'll explain further later.

We spread out fishing in different areas. I picked a little back eddy under the road bridge where I saw a school of micros. I got some bites but nothing long enough to get the tiny tanago hook. Meanwhile Eli and Ella was tossing lures in an attempt to find Spotted Bass and Eli said he had a couple of big minnows chased his lures.

After a couple of hours, Eli and I had just about given up. Pat had waded upstream to check out more habitat. Despite some very prime area, Pat caught nothing. We were all using frisky nightcrawlers at one time or another. This was simply unheard of. If there was a sizable fish in the stream, either a minnow or a sunfish, we would have eventually found it using worms. Yet...we were fishless. With the large amount of inchworm falling into the water, there were no rise for all that free food, which was surprising as well. Perhaps the fish were so engorged with inchworms that they could feed no more? It was a probable argument as we were still picking off inchworm from the car seat 2 days later.

Eli and Ella decided to check out another nearby spot. When they returned, Eli reported seeing some minnows but these fish quickly dispersed when he tried for them.

Pat seems rather concentrated in one little corner. Indeed, he found a couple of Spotted Bass against the shore. By the time we joined Pat, one of the bass had left. The remaining fish seems quite intent to hold its territory. We tried multiple micro panfish jig, Gulp! on micro jigs, live nightcrawlers, live redworms, worms we found on location...I even caught a small frog and freelined it! This fish showed varying level of interest from complete disgust to a tentative bit for Eli's micro jig. At the end, Eli and Pat had given up and they were waiting for me to quit. Seeing we had limited time, I gave up too.

We left the area with our tails between our legs in defeat. Hopefully the next area would be more productive for Eli. Again, I would have yet another uphill battle finding a new lifer.

Our next location was a set of bog. The water had a high level of tannin. This slightly acidic water is home to Flier Sunfish, Chain Pickerel and some micros such as Eastern Mudminnow, Bluespotted Sunfish, Banded Sunfish and Swamp Darter. Eli's targets were the Flier Sunfish and Chain Pickerel. Since I had caught the two already, my targets were the difficult micro species.

These micros were difficult since they are associated with weedy areas. By associated, I meant to say they hide in thick weeds. Eastern Mudminnow is also a nocturnal species, thus even if you spotted one, it may be inactive. While Pat and Eli waded chest deep in bog water, I spent a lot of time fishing inch by inch around weeds and within holes with the tanago hook. This was the issue I was faced with. Habitat for these micros were everywhere. Just look at that task all around me! 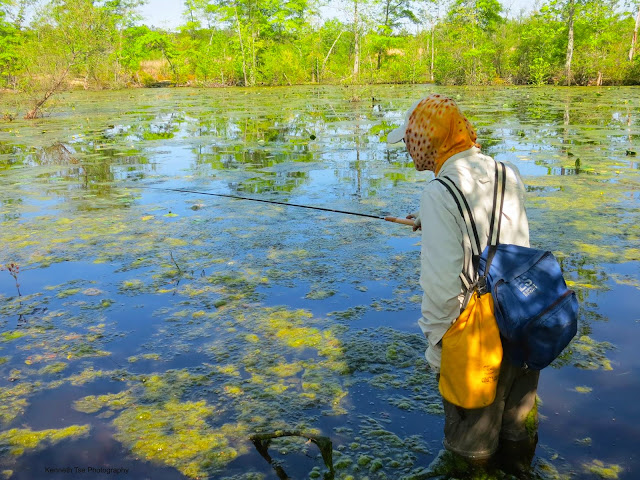 Ella was originally hesitant to wet wade into the bog. But she surprised us all by going neck deep in it. We were all super impressed! I limited my depth to only chest deep. It appeared that most of the fish were restricted to waist deep water and there was little need to get too deep. If you wish to cross the bog, you did have to wade in neck deep (for short people like Ella and I LOL). Ella wanted to follow Eli...so she went right in.

Fishing in the bog may seemed strange, but I did catch a lot. Sadly, all of them were Flier Sunfish with one additional Warmouth. Warmouth are actually quite rare here, but both Eli and Ella would eventually catch a Warmouth too. I had a couple of fish snapped my 2lb tippet. There were some big Flier, Black Crappie and even small Largemouth Bass that could be potential culprits.

Eli was having problem catching the Flier Sunfish. This was an issue I also had on my first attempt at Fliers. Eli had already added a couple of less probable lifers Golden Shiner and Warmouth. I said the Fliers were hiding within the holes among the aquatic plants, so Eli started probing all the shallow slop as well.

Pat and I saw small schools of some very small sunfish. We suspected that they could potentially be Banded Sunfish or Bluespotted Sunfish, but we couldn't land one to confirm. Certainly they behaved very different from other juvenile sunfish since Bluegills or Flier would not hesitate to bite. These little sunfish would inspect the bait in a group but often did not show any intent to taste the flake of worm we were fishing.

At the end, Eli and I decided to try the stream nearby for any lifer minnow species.

Just as we were leaving, Eli happened to stepped into a puddle in our path. He noticed a fish that was disturbed and said "I'm pretty sure that was a Mudminnow."

Eli offered me the opportunity to try for it. We lost sight of the fish, but figured that it was hiding in the holes between the flooded grass. You would laugh if you had seen us. I was dipping the tanago hooks into a puddle with 4 inches of water. But sure enough, as I lowered by flake of worm into a hole between two clumps of grass, I felt a little tap and the line went sideways. I set the hook into a decent size Mudminnow (decent is relative...this fish was about 5 inches long). Unfortunately, as with most tanago fishing situations, the fish fell off the hook as it broke surface. :(

I kept trying a few times but Eli eventually returned to the car. Just as Eli was out of shouting range, I had the same fish bit again and yet again it got off the hook as the fish broke surface. ARGH!

I started looking more carefully in this puddle and found a second smaller Mudminnow that was already spooked by my presence. Pat returned and saw me fishing in a puddle and I told him my story. He said indeed they could often be found in flooded areas and puddles are definitely potential habitat.

I tried different areas looking for different lifers. I saw one minnow that didn't stay around for long. I tried the head of a pool, the middle of the pool and the tail end of the pool where the water slow down. Pat mentioned he had caught various minnow in the slower eddy in the past, but no one was home today. Eventually, I did catch a Redbreast Sunfish, but it wasn't a lifer for me.

Pat was tossing a little gold spinner and caught a bunch of big Bluegill and Redbreast Sunfish, as well as a couple of Black Crappie. He and I were soaking bait in hopes of finding a rare Mud Sunfish, but alas our efforts did not pay off. It was getting toward sunset and eventually we had to quit. Pat said that I often don't quit...indeed, I'm often the last person still on the water trying.

Eli finished with three more lifers for the day!

When we got home, Lia bought some Salvadoran roast chicken, with plantain, cassava, rice and refried beans. The chicken is great as is...but that GREEN SAUCE kicks it up not just a notch...but a few flights of stairs! It is probably just jalapeno in a blender...but wow! I had it last time (2013) with Pat and Lia and I really missed it. The yellow sauce was good too. 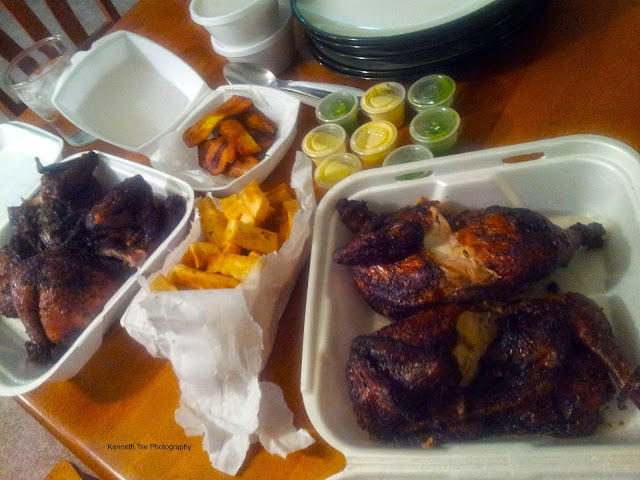