People often say big fish are difficult to catch. We would argue that it is the smallest fish that drives grown men insane.

Michael and I had a mission to try fishing for darter species for the first time. We fished a stream that were reported to have Johnny Darter, Fantail Darter and Rainbow Darter. I had seen some darters in the past during the summer, but since this is now mid-fall, it was uncertain if we would see any of them today.

We got to the stream as the sun was just below the tree tops. We took a look at a couple of areas where I've seen them before. With the colder water temperature, the darters were not using the shallow gravel flats where they were common in the summer.

We started to present our bait in slight deeper water with a bit of current, check around any rock crevices where darters might hide. For an hour, it was just a complete failure.

Finally, I suggested to check out a deeper pool with flat bedrock bottom, a bit of gravel and sand covering that bedrock, and a few boulders distributed around as cover. We found a lot of Silver Shiners, Striped Shiners, and Northern Hogsucker in this pool. We spent a bit of time trying to figure out just what kind of minnow population was there. There were a couple of minnows with a black stripe that we couldn't identify without catching them. Michael also saw some diamond shaped minnow that he said looked more like barbs. We didn't catch any of them though.

Silver Shiner (Notropis photogenis) is a Species At Risk in Ontario, but they were very abundant in this creek. 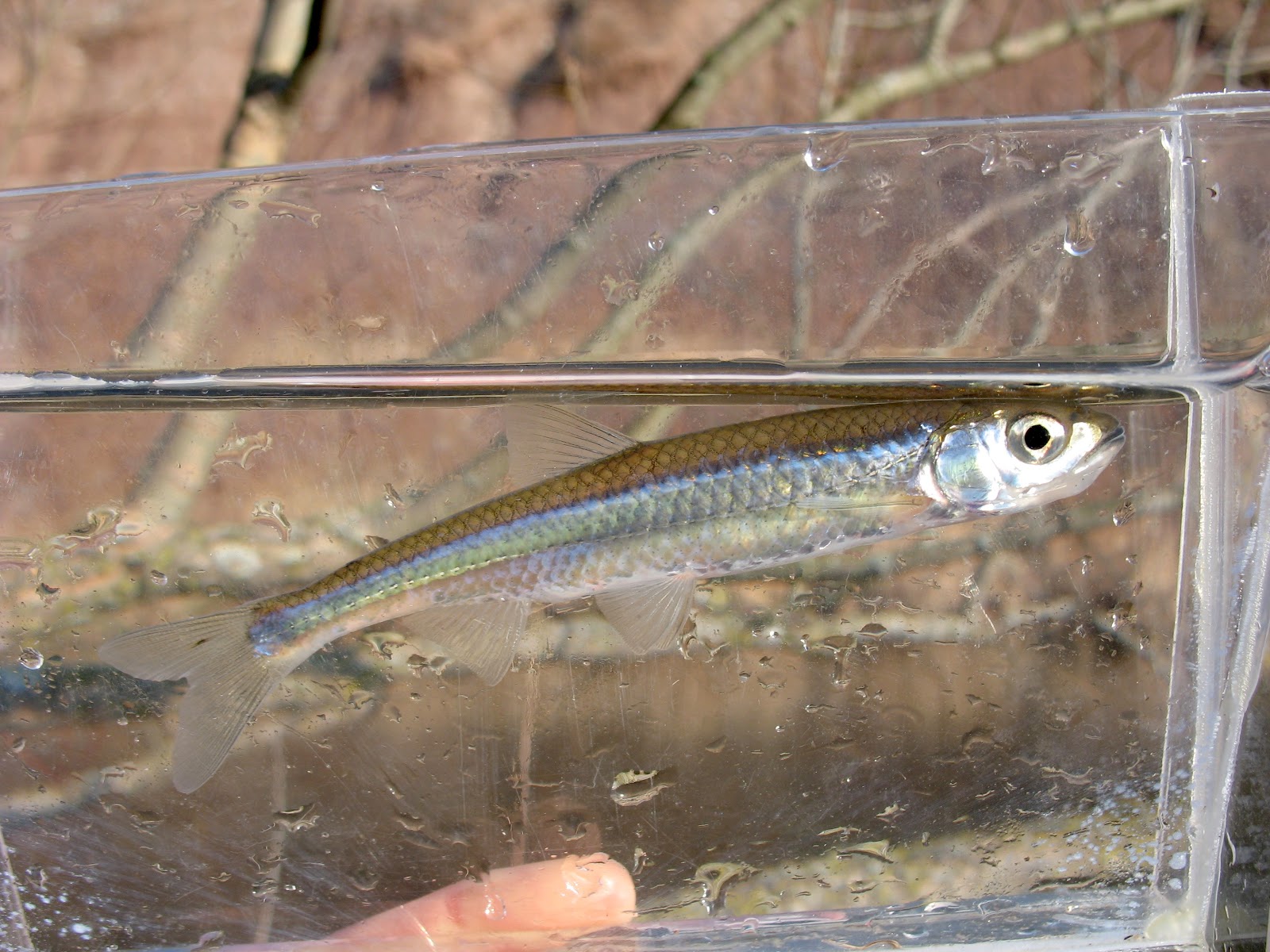 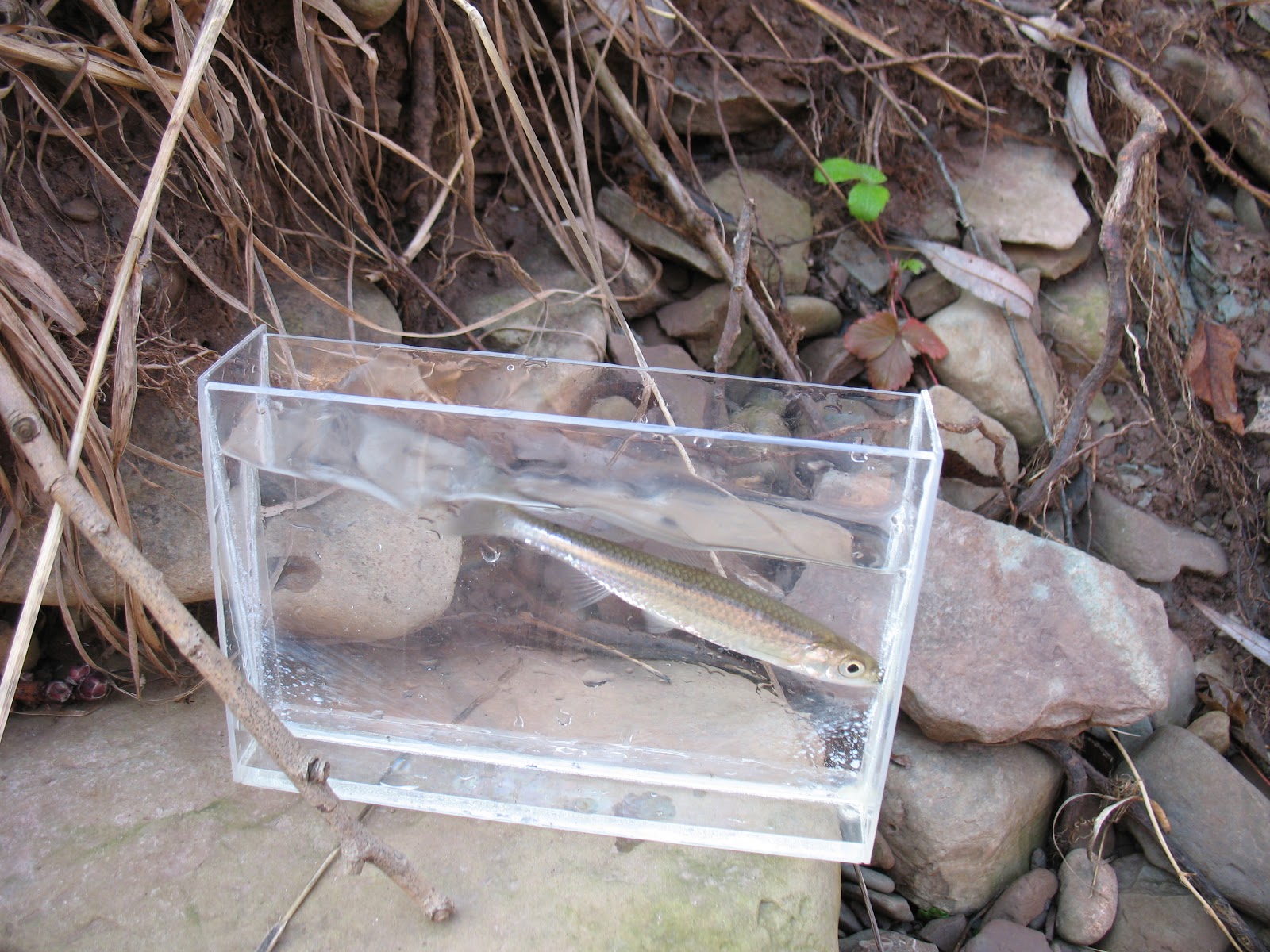 After a while, I started to search for darters again in the head of this pool. I saw a few darters and a couple of them were slightly larger in size with multiple bars. They could be Johnny Darter or Fantail Darter; but I wasn't able to get them to bite. There were some smaller darters and one hit the tiny bit of worm but couldn't hook it.

Later in the day, Michael and I decided to move downstream to search another spot for darter. On the way, I spotted a darter sitting on top of a rock. We fished for this darter for a while and Michael and I both got bit by this fish. Michael even managed to hook it for a bit until the hook came out. So close!

The fish lost interest after getting hooked. I said it's funny we're so concentrated on one fish when there could be many more around us. Michael started looking and we noticed all the little darter around us!

At one point, Michael was fishing amongst a small group of 4 darters. They were crafty bait thieves and after cleaning the hooks a few times, they lost interest and disappeared. We were constantly talking to the fish, asking for them to hit and take the hook in the mouth. We looked for some new fish, some of which shown interest. When they would suck and spit the baited hook quickly, we cursed them. When they cleaned our hooks, we cursed some more.

The water was so cold, even with 3mm neoprene waders. I forgot my wool socks today and my feet were completely frozen to the point it was tingling the whole time, like needles prickling every second all over your feet. But we couldn't really move around too much to warm up since any big movement would drive the darters away. Michael and I just numbed ourselves to the pain and concentrated our minds toward the little fish.

Finally, I found one lone darter sitting out in the clear and presented my bait in front of the fish. It quickly pounced on the bait. At that moment, the wind picked up and the ripples on the water blocked our view of the fish. Once the wind died down, I couldn't see my bait, so I tried to pull my rig up to see if I had any bait left. I saw the fish attached to the line and was excited for a moment until the fish came off just as it broke the surface! Argh! More cursing...

The wind started getting worse and worse and ripples constantly obstructed our views of the little fish and their activity. When I found a new darter, I was lucky enough to have a moment of calm as the fish bit my baited hook. This time, I let it chew on the bait for a while longer. The fish was twisting and turning and I figured that it had already took the hook far enough and perhaps hooked itself. Indeed...it did hooked itself!!! This time, I tried to remain calm and collected until I had the fish lifted up, filled the micro photo tank with water, and put the little fish in the photo tank. 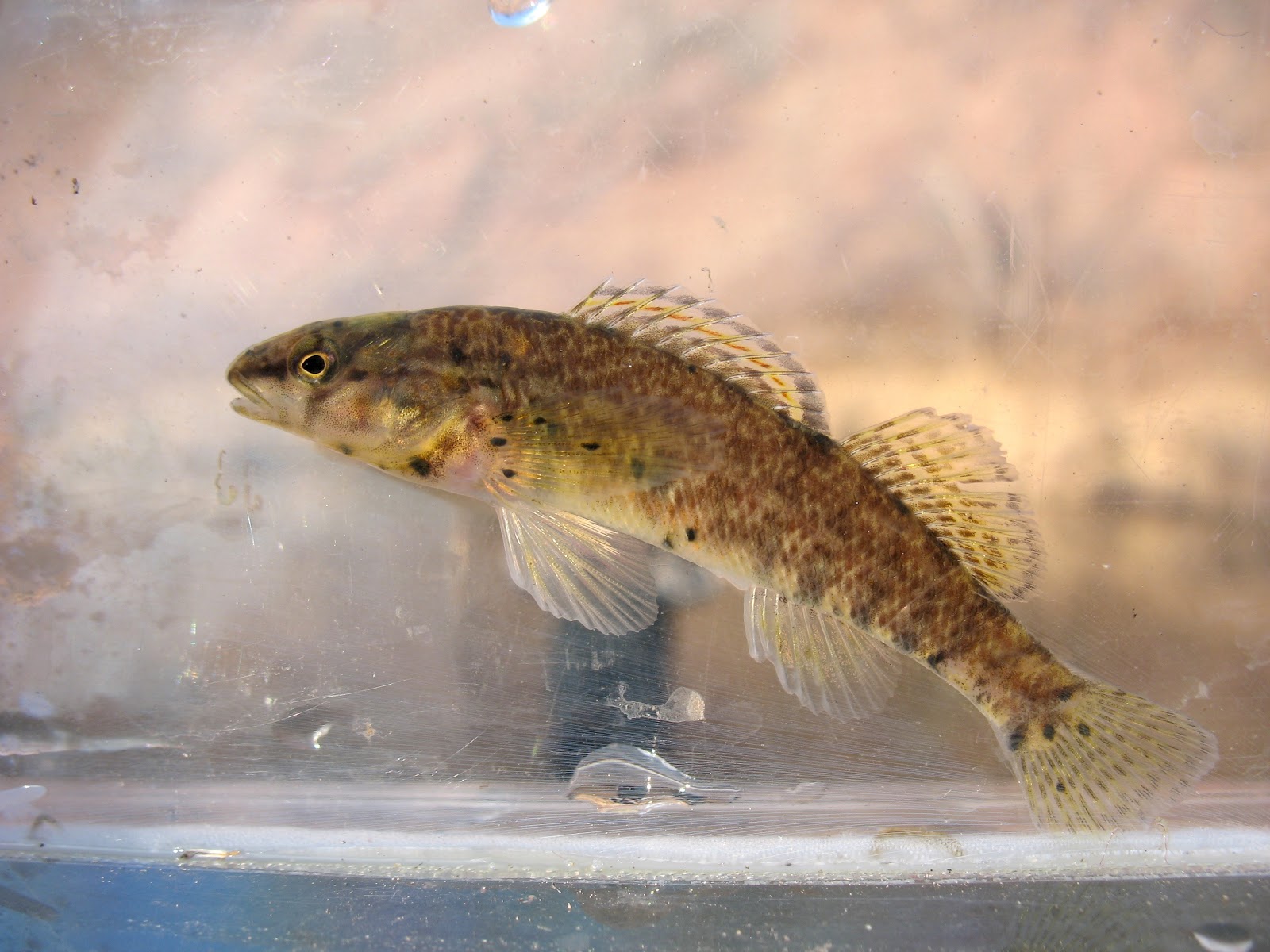 This one is likely a female. Although the male spawning colours does fade in the fall, but I doubt their colours fade this much.

Meanwhile, Michael was trying to precisely present his bait to some darters at his feet. The rod became useless and he was reduced to hand-lining for darters. It was at that point we realized we should be institutionalized. We're probably suffering frost bite on our feet, yet we're hand-lining for 1-inch fish...we've gone crazy. 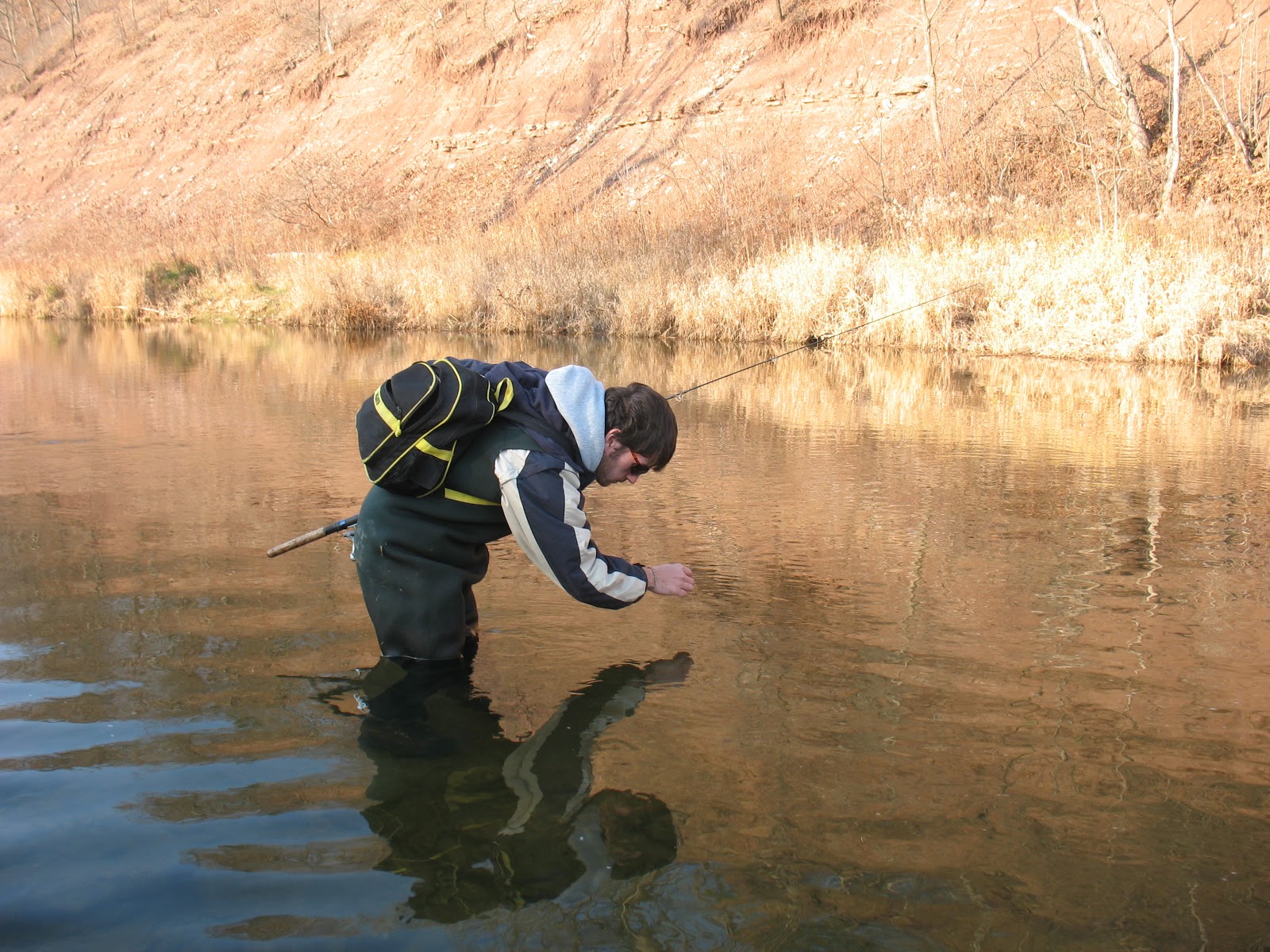 After an extended photo session of the little beautiful darter, it was released unharmed and healthy. I returned to fishing and immediately found a smaller darter. I thought maybe it was another species of darter. This darter went for the bait and it did the same twist and turn on the line...and up came my second darter of the day! Unfortunately, it was another Rainbow Darter. This one may be a juvenile. It was this SMALL. 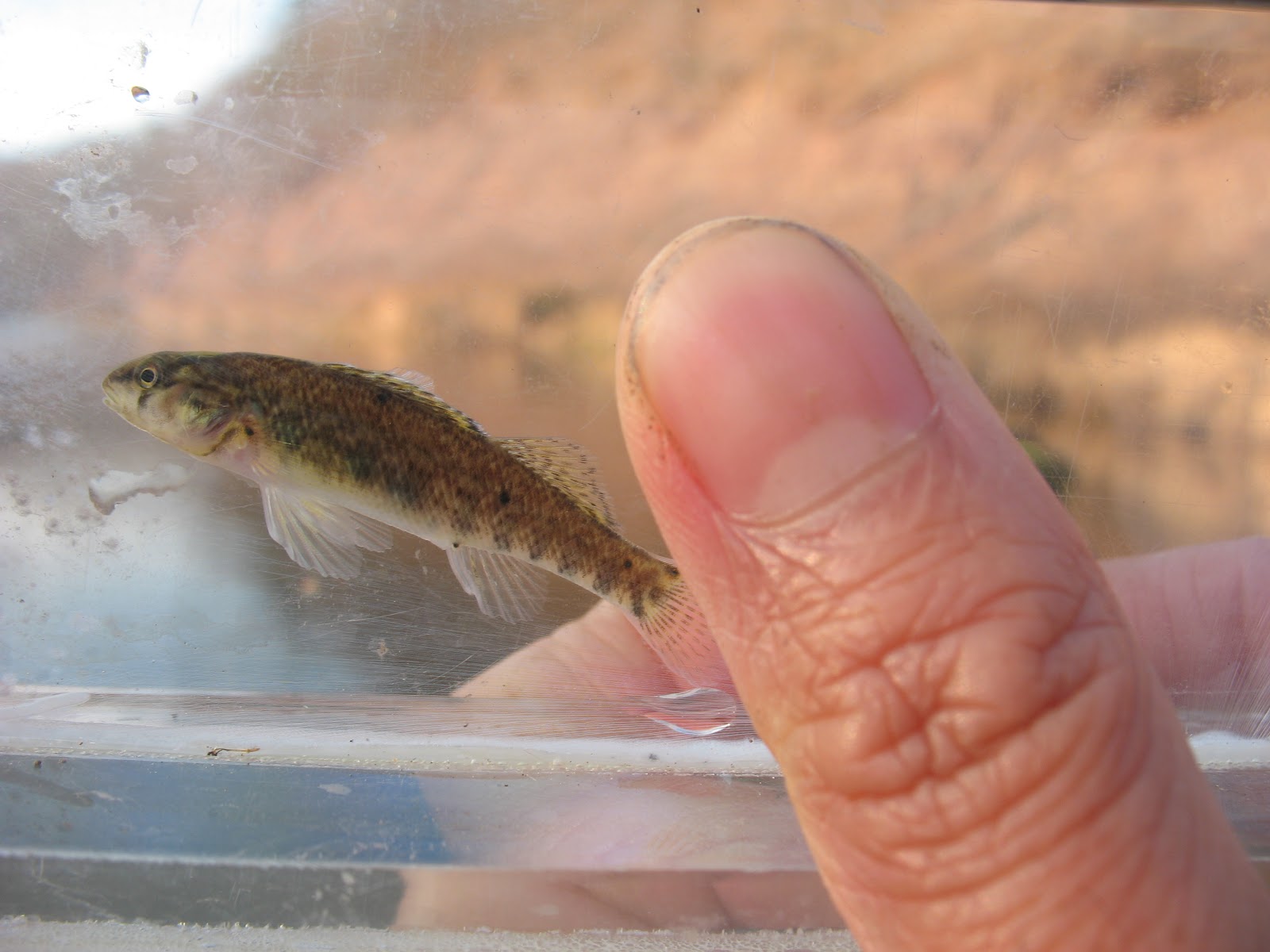 I then joined Michael to look for more fish for him to target. Strangely, the fish seemed to have disappeared. We were not sure what changed, but after thinking about it a little, we concluded that perhaps the sun has to do with it. We started finding the darters at about 2pm after the sun was hit the water for a while. The darters might have came out to sun themselves. Once warm enough, their activity level might have increased enough to feed. But when the sun dropped below the tree tops at 4pm, the darters disappeared.

We were fishing on the left side in this picture...maybe we should have checked the right side of the stream at the head of the pool where I saw some earlier at 2pm. 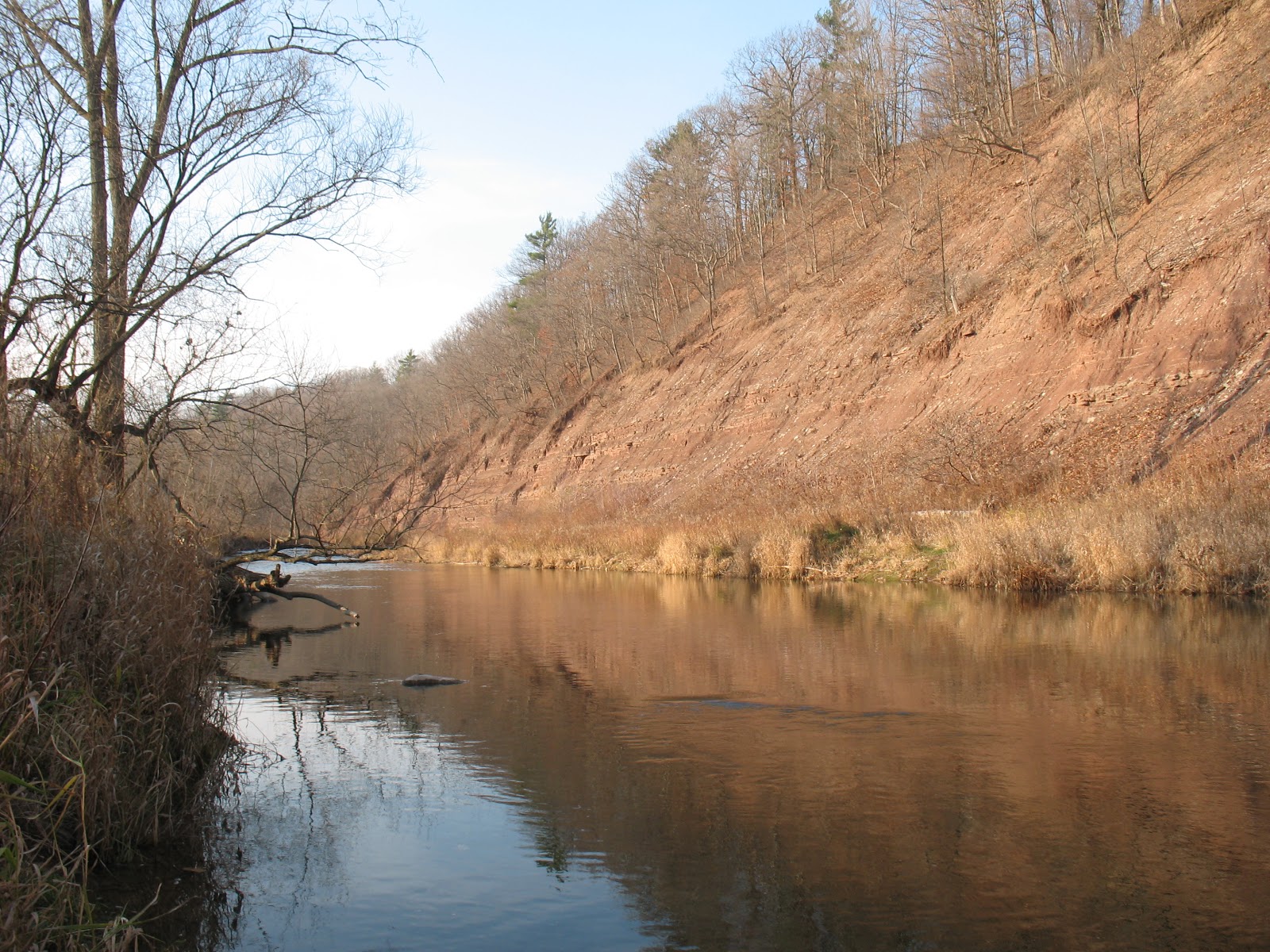 We stayed on the creek until 5pm looking for darters but found none. We did catch some more Silver Shiner, Common Shiner, Striped Shiner and what I thought was another new species. However, looking at the pictures at home, it might just have been a juvenile Striped Shiner.

It was a great day on the stream, a little nice break after a few days of solid work.
Posted by MuskieBaitAdventures at 1:25 AM