Back in fall, Elijah informed me that he planned to spend Christmas in Florida. He was planning a mostly solo trip. With family in Florida, it didn't take much convincing to get me involved. Soon, we had a concrete plan for a lifer hunting trip in the Keys and Fort Lauderdale area.

I invited Michael and Bartek along for the ride. Most of Bartek's fishing experiences involved freshwater situation. Having fished for only a few years, he was still very much mesmerized by the big, strong and fabled gamefish. This would be his first real taste of a lifer hunting trip, although his desire to catch gamefish often swayed our lifer hunting decisions.

After a day and a half of solid driving, we reached Lake City, FL on the night of Dec 18. It appeared as the northern weather had followed us south. We woke up at 6am on Dec 19 to 36F - very cold even by northern Florida standard.

We had planned to explore the Santa Fe River this morning. However, the cold front is likely to severely decrease fish feeding activity, regardless if fish were taking refuge in the springs or not. I had to make a executive solution - either fish through tough fishing conditions for an improbable Suwanee Bass and other micro lifers, or fish further south in Tampa in search of better fishing action for the group.

This kind of decision would be the signature of this trip. Having caught 103 new species from Florida, it was increasingly difficult to find new lifers from the state. However, with two fellow anglers who are more inclined to merely catching fish, especially predatory fish, over chasing some difficult and often obscure species, I often put the interest of the group over my own desire. As such, my expectation for any significant lifer success was kept extremely low.

Ryan was scheduled to meet us in High Springs to fish the Santa Fe. However, after consulting with him on the phone, we decided to change plan to Apollo Beach. I was hoping to find Bonnethead Shark and juvenile Blacktip Shark. However, we changed plan again and settled on Sunshine Skyway pier. The uncertainty of Apollo Beach simply wasn't all that attractive for everyone.

Ryan had already arrived when we saw him fully set up at 11am. He was busy catching Pinfish for bait. Having fished Skyway pier before, I know that species diversity would be quite low. I sent out a live pinfish on a heavy rod in hope for sharks while fishing the sabiki or dropper loop for smaller species.

Pinfish, grunt species and the occasional Lane Snapper kept us busy enough. While making bait, I did find a Silver Jenny. Although I caught this species on my last trip to Florida, I had hoped to catch another one for an opportunity to take some better pictures for the life list entry. 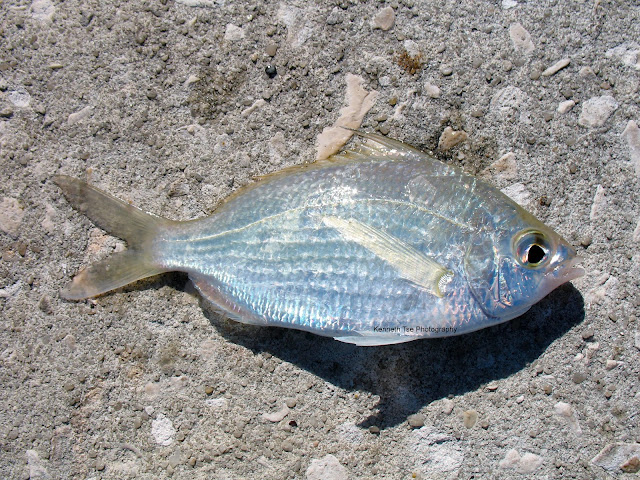 After collecting about 2 dozen Pinfish, I grew tired of doing the same thing over and over again. Putting a chunk of shrimp on the dropper loop rig, I probed the pylons in hopes to find a snapper or perhaps a small grouper.

Pinfish continued to harass my bait and easily stripped them off the #8 baitholder hook. Finally, I felt a different bite and hooked into something a bit stronger and more determined. The fish tried to wrapped me around two pylons, but I took a different angle and pulled the fish out before it went too deep into the structure.

When the black and white striped fish surfaced, it looked to be a legal size Sheepshead. I called for the pier net and Ryan helped me to land the fish. 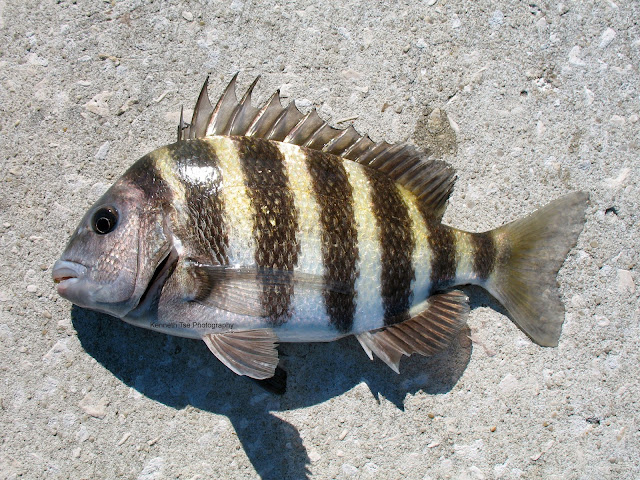 Unfortunately, it was 0.5" shy of legal size. Otherwise, I would donate it to Ryan's dinner.

By 1pm, Ryan had to return home to prepare for a Christmas party. Michael, Bartek and I didn't find anything else different. By 2pm, we decided to call it a trip so we can visit Bass Pro Shops in Orlando.

Unfortunately, we were delayed for over 2 hours on I-4 due to a serious fatal accident resulting in 1 dead and 7 injured. We didn't get to Orlando until 7pm. We spent as little time as possible, but still didn't leave until 8pm. After dropping off Michael and Bartek at their hotel, I finally arrived at my cousin's house at 9pm.

My cousin, Tom, had graciously prepared dinner and saved me a hearty portion. I had dinner while he started to build a diamond wrap for his new rod, and my two new nieces sat beside me hoping for a taste of the food. After dinner, I watched the twins play on the couch and got to know their personality a bit. Ainsley was a fearless social butterfly and Arden was a cautious observer waiting to speak her mind. Later, their mom, Annie, took a few pictures of us - big sister Ava held Arden and I held Ainsley. 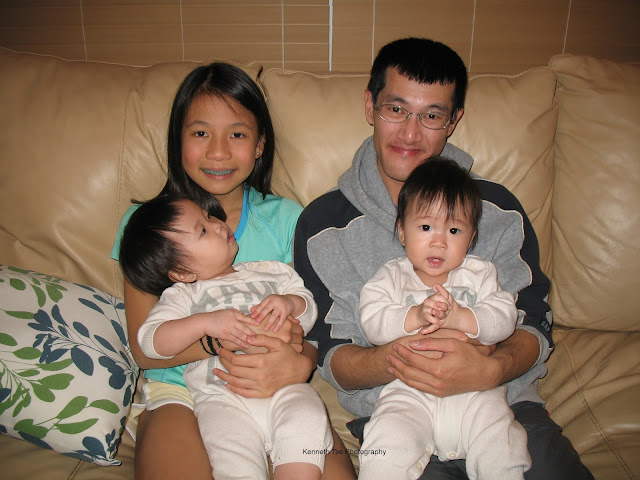