A while ago, Ben, Miciah and I discussed a plan to fish together in the spring. Our idea was to fish for Asian Carp and Smallmouth Buffalo at Carlyle Dam in Illinois. This simple idea soon exploded into a full blown itinerary.

This trip was almost interrupted last minute when one of my experiments at work was contaminated. Ben and Miciah was oblivious about it, but it took some last minute sacrifices to make sure the trip can happen. Luckily, I was able to get on the Greyhound bus at 5:30pm on Thursday and arrived in Chicago at 6am Friday.

Ben picked me up at the station and we immediate discussed the day's fishing plan. Our first stop was Kankakee River State Park. There were a few micro species and redhorse species available in the Kankakee.

Unfortunately, the river was high and a bit off coloured. We searched and searched for Blackside Darter and Slenderhead Darter but they were not around. Lucky for me, most of the species in the Kankakee were new to me. I was able to catch Sand Shiner and Bluntnose Minnow. 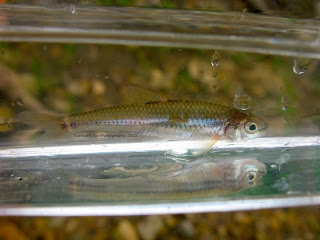 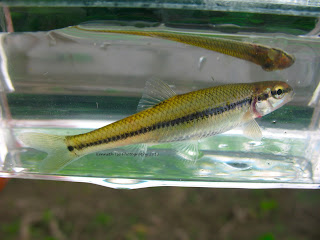 An hour later, we were on the road again to fish in the Champaign area. There were several creeks in the area that we fished.

The first spot was a beautiful free stone creek. Upon arrival, we saw a multitude of minnow species. One particular species caught our eye. There was a school of Carmine Shiners. Their red spawning colour was very evident. 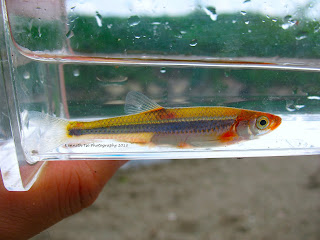 I tried and tried to catch one of the Orangethroat Darters in the area. They were quite shy and even when I had one bite, it was difficult hooking them. The Striped Shiner, Creek Chub, Bluntnose Minnow Hornyhead Chub and Sand Shiner were quick to bite though. In fact, they bit so quick that we had a hard time trying to catch anything else. Other fish we saw in small numbers included Longear Sunfish, Black or Golden Redhorse and Stonecat.

We moved to another small creek and this area was supposed to be filled with Central Stoneroller. However, they were nowhere to be seen on this day. After fishing hard, I finally enticed an Orangethroat Darter to bite. There were two darters and the fierce competition for food convinced them to bite quickly and held onto the bait longer. 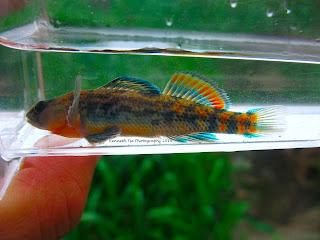 Ben went upstream to explore and he found some Central Stoneroller. We tried at them but the other minnow species were too quick to bite. I did manage to catch a Blackstriped Topminnow. These little fish had been eluding me at the last 2 spots. 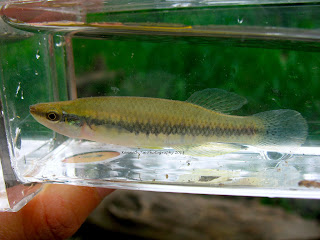 We then moved to another stream where River Redhorse and Black Redhorse may be found. There was also some Spotted Bass in the area. However, the water was really high and the water was off coloured. Ben was quick to wade ahead of me. He did not realize that my waders had sprung a leak as soon as I was waist deep. Soon, the stream was deep enough that I was chest deep and my wader had flooded. There were also some deep holes where I was barely reaching the gravel on tip toe and just managed to push gravel with the tip of my boots. Needless to say, this spot was a total bust. We did see a Common Carp and a couple of Redhorse.

The next location was much nicer. It was another beautiful stream just filled with darters! We saw what appeared to be a Spotted Bass upon arrival, and the fish took my spinner on the first cast but the bite was not good enough for a hookset. Unfortunately, the fish disappeared after.

Ben found a couple of suckers and chased them for a bit. He then found a school of Central Longear Sunfish and I soon added one to my list. 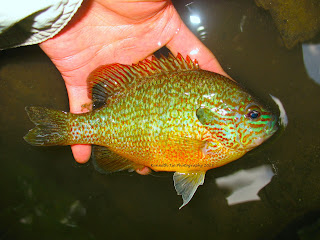 Like I said, this area was FULL of darters, especially the Greenside Darter. Once you know where to look and what to look for, these little fish were all over the place. It still took a few tried to catch one since they prefer swifter current areas and it was a bit more work positioning the bait in front of their faces. 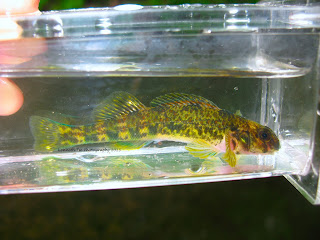 Ben also caught a male Rainbow Darter and a male Greenside Darter that are spectacular. 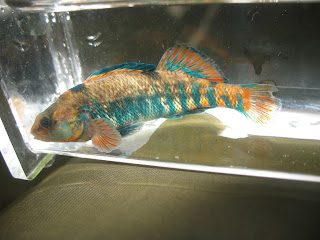 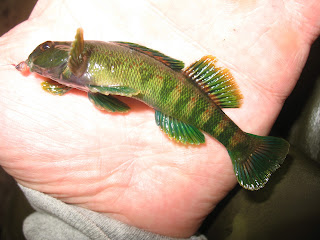 At the end of the day, we had about an hour of daylight left. We decided to fish a discharge area where Ben's friend had caught Spotted Bass before. However, we only caught Smallmouth Bass and Striped Shiner, and saw a Northern Hogsucker and some more Sand Shiners.

That night, we camped at Ben's uncle and aunt's property. It was nice to finally get out of my very wet jeans and socks. Ben's family were really nice people. The weather was beautiful that night and we both quickly fell asleep under the stars.

Posted by MuskieBaitAdventures at 11:03 PM